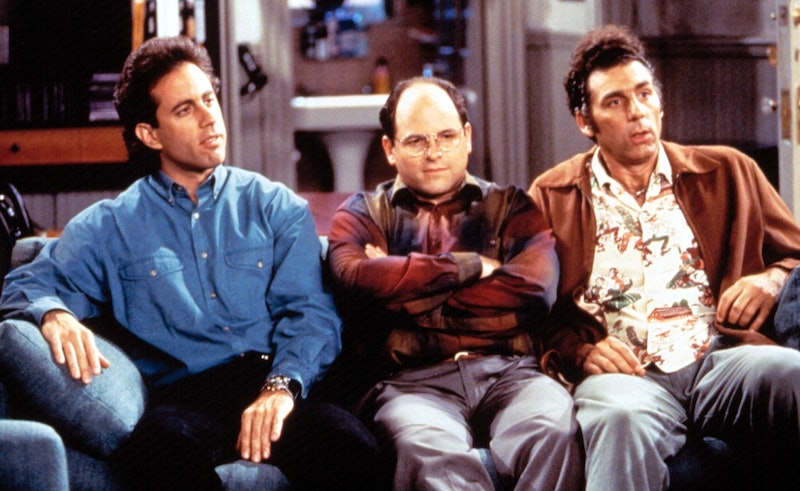 Seinfeld. It’s a show about nothing. And, yet, it was kind of everything. To most people, including myself. And probably you, and you, and... yada yada yada. Now that it’s been off the air for 18 years, we all miss the quips of Seinfeld, Costanza, Kramer, Elaine, and, even dare I say, Newman. But fear not, Seinfeld fans, because I have a treat for you. And it’s not soup. You don’t get any of that, remember? It’s also not muffin tops, though to be honest those might be just as good. It’s a list of shows that you will enjoy, based on the fact that you were/are an avid Seinfeld viewer.

Though Seinfeld was unprecedented in the world of sitcoms — and though nothing that’s come after it has quite nailed the perfect nothingness it so exemplified — there are shows out there that will fill its void. (Or, at least, fill a part of its void because let’s face it — Seinfeld cannot be duplicated.) So, without any further yadas, here are 12 shows that all fans of Seinfeld will love. Some you might have already seen, and some you might not have delved into yet, but all will leave you feeling... festivus? Not that there’s anything wrong with that.

Make no mistake, Curb Your Enthusiasm comes in at number one on this list because it shares a creator with Seinfeld. That is, Larry David. The contemptuous HBO comedy followed David's antics and anxieties, all while feeling directly derivative of Seinfeld. Many have pointed out the similarities, but I dare you to find someone who has complained about them.

Like Seinfeld, Cheers was driven by its dynamic, unforgettable, lovable (and sometimes not lovable) characters. Fans of Elaine and Jerry's romance will be infuriated by— but also probably enjoy — the romantic connection that is Sam and Diane.

As a spinoff of the aforementioned Cheers, Frasier follows Dr. Frasier Crane. Frasier, like Seinfeld, has a quick and effortless ease about its comedy, and, though the jokes seem to be aimed more at intellectuals, Seinfeld fans will get them.

Mad About You centered around the lives of married couple Paul and Jamie in New York City. Similar to Seinfeld, the plots mostly consisted of the characters and their humorous minutiae.

Though there will never be another Elaine Benes, Christine Campbell comes in at a close second. Most of the humor rises from Christine's awkward encounters with her ex-husband and his new girlfriend, the "New Christine." So, 22 minutes of awkwardness from Julia Louis-Dreyfus. Need I say more?

Much like Seinfeld, 30 Rock was a progressive sitcom. The writing was fast, the characters were always trying to outdo themselves with absurdity, and the dynamics between the cast members were excruciating, but still kind of sweet — reminiscent of those you'd find on Seinfeld.

The parallels are easy to see. Both star stand-up comics as quasi-autobiographical versions of themselves in — what else! — New York city. While Seinfeld was a show about trivialness, Louie confronts pretty serious questions head on, but does so with tinge of dark humor and stand up mixed throughout.

9. It's Always Sunny In Philadelphia

The irreverent comedy about six deplorable friends took what Seinfeld did and then made everything exponentially more inane. Like Seinfeld, Always Sunny was pioneering the sitcom from the beginning.

Another show that made waves in the sitcom world for its originality. Arrested Development is a quirky and uncontrived respite from your typical comedy. Which reminds me of — yeah, you guessed it — Seinfeld.

While Elaine and Selina Meyer are distinctly disparate characters, I like to think of Selina as Elaine's alter ego. And imaging some form of Elaine as the Vice President will always be entertaining.

Unfortunately, Mulaney got the boot after its first season and was never able to truly find its stride. But, if you appreciate the comical banality of Seinfeld plot lines, and the integrated stand up, give Mulaney a watch.

Looks like you Seinfeld fans have some work to do. Better get on it.