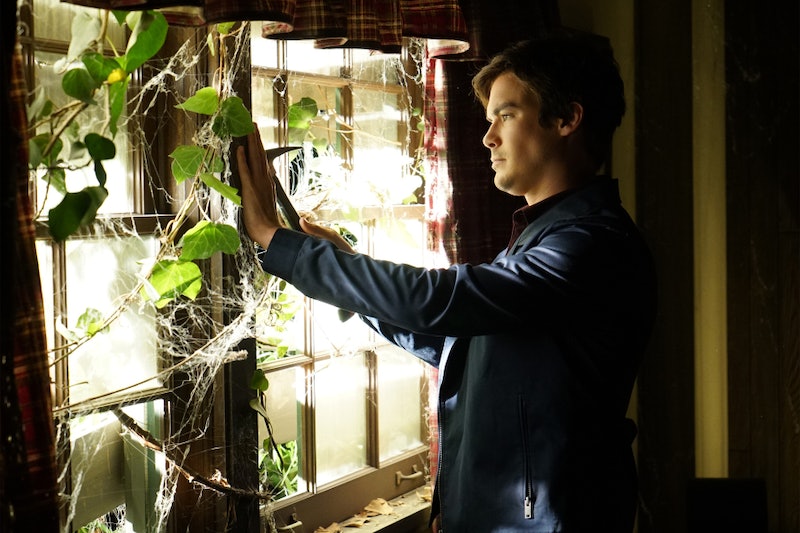 I'm about to utter a question that quite literally sends chills up my spine and makes my heart weep: is it possible that Caleb killed Charlotte on Pretty Little Liars ? The mere thought of it sounds insane, I know. This is Caleb Rivers we're talking about here — loyal friend and ally to the Liars since Day 1. But that's the thing, isn't it? He cares so much about keeping the Liars safe that it may have driven him to take drastic measures. We've been wondering all season about the identity of Charlotte's killer and what their possible motivation could've been. So what if it was done not out of revenge, but out of fear? Fear that Charlotte would revert back to her A-centric ways and make the Liars' lives miserable once again. And given the type of caring person that Caleb is, I could see him going to great length to ensure their safety.

Look, I'm not saying that I want to believe this. Trust me when I say that the idea of Caleb being a murderer brings me no joy. However, I'm also not willing to rule anyone out at this point, including him, especially since I know how protective he is over his friends. After hearing about Charlotte's release, he may have panicked and thought there was no other alternative. Not to mention that he might also secretly blame Charlotte for why he and Hanna are no longer together. Maybe if she hadn't wanted to disassociate herself from all things Rosewood then they wouldn't have drifted apart. Either way, he definitely has a motive for doing it. Plus, he also could've had easy access to the alleged murder weapon.

The bag handle may have belonged to Melissa's suitcase, but Caleb has been living in the Hastings backyard barn-turned-apartment, which could've been where the suitcase was normally stored. And, as Tumblr user prettylittlelrs noticed, Caleb may have come across that paper Spencer wrote while at Georgetown, which described a murder that strangely mirrored what happened to Charlotte. Of course, Spencer immediately thought that Ezra had used it for inspiration to kill Charlotte, but what if it wasn't him? What if Caleb — who is always looking through Hastings files — came across it one day and decided to use that same tactic with Charlotte?

Granted, I should mention that there's also a big part of me that's still very skeptical about this theory. I mean, Caleb's not a killer, right? But at the same time, I can't deny that there are parts of this theory that make a lot of sense. He had the resources to carry it out and we have no idea what he was actually doing the night of the murder. Let's just hope that Uber A never puts these pieces together... for Caleb's sake.

For more PLL theories, check out Bustle's podcast below:

More like this
Everything To Know About The 'Pretty Little Liars' Reboot On HBO Max
By Mary Kate McGrath and Jack Irvin
Everything We Know About When To Expect Money Heist: Korea Part 2
By Kadin Burnett
Viktor Hargreeves’ Coming Out Scenes Are The Sweetest Part Of Umbrella Academy Season 3
By Gretchen Smail
Wait, What’s Going On With Ben In That Umbrella Academy Season 3 Post-Credits Scene?
By Gretchen Smail
Get Even More From Bustle — Sign Up For The Newsletter