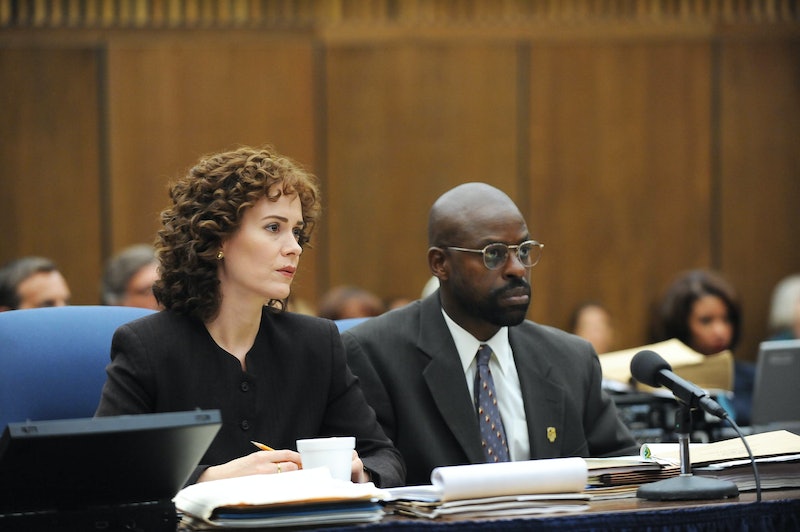 Whenever a real event is portrayed on the small screen (or big screen, for that matter), one of the biggest dilemmas every viewer faces is trying to discern what is real and what's been added for pure entertainment value. That's the struggle The People v. O.J. Simpson: American Crime Story fans grapple with on a weekly basis, not just in regards to O.J.'s actual court case, but the actual relationships of these characters as well. And for me, there's no relationship more intriguing than the one that exists between O.J. Simpson prosecutors Marcia Clark and Chris Darden. From what we've seen so far, these two characters appear to be attracted to one another, which begs the question: did Marcia Clark and Chris Darden date IRL? It kind of depends on who you ask.

Back during the actual trial, there was a lot of speculation surrounding their relationship, which clearly stemmed beyond that of a professional level to at least a friendship. The two of them definitely spent time together outside of the office, but in what capacity? That still remains a little unclear. In Darden's book In Contempt , he admitted that the two of them once went on a weekend getaway together to San Francisco and made it clear that they both had strong feelings for each other, however, he neglected to specify whether or not their intimacy reached a physical level.

"She and I were two passionate people thrown together in a trial that left us exhausted and lonely. She was willing to take off her jewelry and go to jail with me over a ridiculous contempt ruling. I was willing to be at her side during her child custody deposition. We sat up listening to hip-hop and R&B. We danced a few times and drank a few bottles of wine. In my mind, that is a relationship."

So from Darden's perspective, in his mind they were in a relationship together, though it's unclear if they ever acted actually had a physical relationship of any kind. And, in an odd twist of irony, he eventually went on to marry a different woman with the same first name and initials, Marcia Carter. Meanwhile, Clark denied rumors surrounding their relationship. When People magazine reported back in 1995 that Clark and Darden planned on getting married, Clark shot down the rumor, with the Chicago Tribune reporting that she told the New York Post, "No, that's completely false. God knows where that one got started." Clark also spoke about working with Darden more recently, telling Entertainment Tonight last September, "Chris and I were trench mates ... He kept me from just utter depression so many days."

Will we ever know for sure if happened between the two of them, besides a close partnership? Probably not. But considering the chemistry radiating off of Sarah Paulson and Sterling K. Brown's characters in the FX series, I'd say Ryan Murphy has his own opinion about the nature of their relationship.