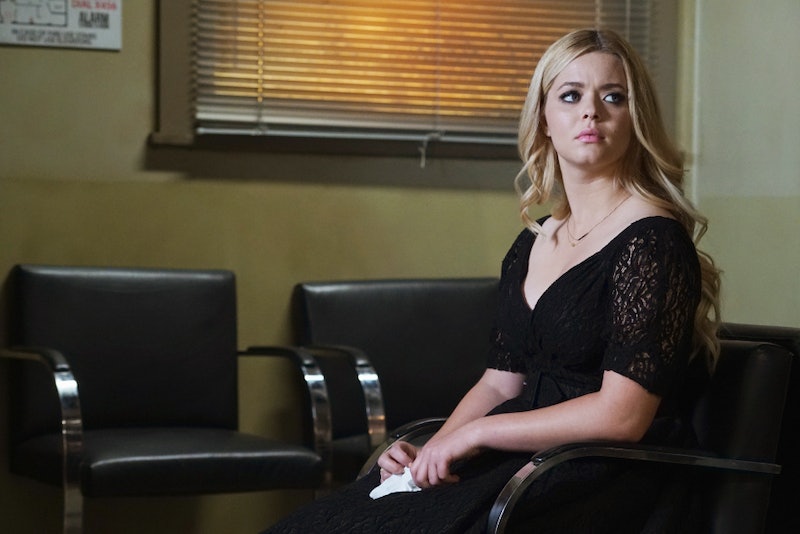 Well, this is certainly a surprise PLL fans may not have seen coming. After I. Marlene King confirmed that someone has a twin on Pretty Little Liars, I've been trying to figure out who it might be — and one of my main suspects was Mrs. DiLaurentis. Sure, she's supposed to be dead, but what if she isn't? On Tuesday night's "Did You Miss Me?" may have confirmed that theory or, at the very least, it suggested that Jessica DiLaurentis might be alive on Pretty Little Liars . And, much like the rest of Season 6b, Jessica's return was a callback to PLL Season 1, which makes it even more likely that she's actually alive.

At the beginning of Tuesday's episode, Ali tripped and fell down a flight of stairs, landing her in the hospital with a concussion. Later on, during what may have been a dream — but, at this point, we know better — Jessica came into Ali's room, waking her up, and telling her that Rollins will take care of her now and that she'll finally be happy. Was it real? Was it a hallucination? I'm almost inclined to believe that Ali was actually seeing her mother because, in Season 1, Ali actually visited Hanna when she was in the hospital after being hit by that car and, well, we all know how that turned out.

There's one detail of Jessica's visit that could really confirm either way whether or not she was really there. In Season 1 when Ali visited Hanna, the entire scene had a dreamy, foggy, bright element to it that left us questioning whether or not it could be real, but Jessica's appearance during Tuesday's episode looked incredibly real. So, really, this detail can go either way. Maybe we're not supposed to question whether or not Jessica is alive because she looked so damn real. Or, maybe, PLL just confirmed that the "dead" Jessica we saw wasn't actually Jessica at all — it was her twin that we've yet to meet.

It'd be kind of great for Ali to have her mother alive and, apparently, Jessica really wasn't as evil of a character as we all may have believed in the past. But I'm not so sure that Jessica having a twin would be the great twist we're all hoping for. Sure, it'd be crazy, but I think I. Marlene King has something bigger up her sleeve.

For more PLL theories, subscribe to Bustle's podcast Taking This One To The Grave:

More like this
Everything To Know About The 'Pretty Little Liars' Reboot On HBO Max
By Mary Kate McGrath and Jack Irvin
What’s New On Netflix: 'Stranger Things' & 'Mean Girls'
By Arya Roshanian
At 14, Kate Berlant Had A Wheelie Backpack & One Line In 'Lizzie McGuire'
By Samantha Rollins
Don't Expect To See Your Fave Modern Royals Depicted On 'The Crown' Season 6
By Jack Irvin
Get Even More From Bustle — Sign Up For The Newsletter