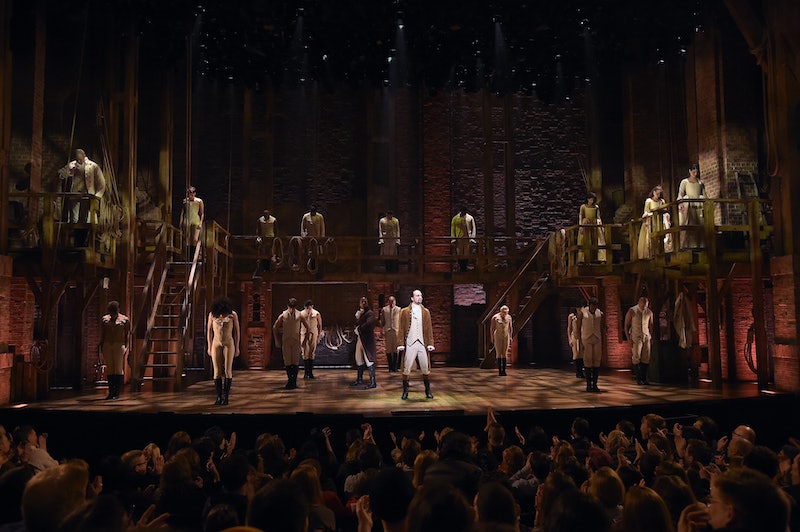 The 2016 primary season is now in full stride, and it seems to be occupying pretty much every TV you glance at. Between the seemingly nightly debates, the wall-to-wall coverage of every primary race, the constant polls, and the many candidates jockeying for media attention, it almost feels like a bad reality TV show. But what if we moved the whole circus to another medium?

What if it were ... a musical! Bernie Sanders crooning to millennials in a sonorous baritone about corporate tax rates. Ted Cruz in classic stage villain attire, complete with swirly mustache, singing out his scheming plans. Hillary Clinton belting out a powerful solo about how she's changed for the better. How much less would Donald Trump talk if all his speeches had to be set to an Andrew Lloyd Webber score? Would any of them have the staying power and excitement of Hamilton?

So if the 2016 presidential candidates were characters from musicals, who would they be?

The Wizard was believed to be so powerful that he could fix nearly anything, and a whole cast of characters put their faith in him. But when someone finally looked behind the curtain, they found a weak fraud using a lot of smoke and mirrors to appear much more impressive. But even once people began to see the truth, he still tried really hard to be important. If you substitute "Ben Carson" in that first sentence, everything else remains true.

Both Newsies and the Sanders campaign are about the little guy (some paperboys / the middle class) taking on some rich, powerful bosses (their newspaper / the one percent). Newsies is the story of labor vs. corporate, only with better choreography. The ringleader of the underdog paperboys is Jack Kelly, who isn't the flashiest or most polished member of the group, but who's a natural at organizing and getting people to rally around a common goal. Heck, Bernie even borrows a page from Jack's playbook — he's bypassing the folks making the headlines to get his message directly to who matters. And let's face it, we can all picture Bernie in a newsboy cap.

One of the things that makes Ted Cruz so terrifying is that he's a true believer. The look in his eyes when he's speaking makes it very clear that he believes to his core every single statement he makes, and nothing could sway him from his pursuits — like overturning gay marriage or repealing Obamacare. Those are the exact same qualities that make Javert such a unnerving villain; his belief that he is right and just is absolute, unshakable, and drives him to obsession. Would anyone be surprised if a shaken, post-loss Ted Cruz declared that he couldn't live in this world and vanished?

Alright, so I'm not sure that Hillary is up for dancing to jazz in a corset, and she didn't actually SHOOT her husband and his mistress, but all the rest adds up:

"What happened to Marco, what happened to his heart, and the ideals he once pursued?" ... You can almost hear the Florida voters singing it. Benny, of course, is a former NYC Bohemian turned sorta scummy capitalist and real estate developer who kind of betrays his friends. In the early days of Rubio's political career in the Florida legislature, he often seemed to be among the more reasonable members of his party, holding some fairly centrist views and often willing to compromise to get things done. But once he became the darling of the national Republican party, every seemed to change, and the current version of Marco Rubio seems like a completely different person. And much like Benny, he doesn't care much for homeless people.

If you aren't familiar, Urinetown is a musical about corporate greed run amok in an era of water shortages, in which all toilets have become expensive, privatized utilities. Caldwell B. Cladwell is the corrupt, power-hungry CEO of the megacorporation which runs the toilets (and which kills the people who dare pee for free). Much like Trump, Cladwell also has a daughter whom he uses mostly as a pawn in his political scheming with seeming little concern for her well-being. He even has an entire song about how rich he is and how much money he makes, declaring that he "brings in bucks by the buckets," which has pretty much been the entire basis of the Trump campaign. Indications are that Trump could meet a bleak fate similar to Mr Cladwell's unfortunate fall should he actually win the election.

Kasich certainly doesn't have the suave nature and singing ability of Grease's romantic lead. But he is often put forth as the likable, reasonable candidate among the immense field of controversial GOP hopefuls. If the GOP was going to have a hero to cheer for, it was supposed to be Kasich. But, much like Danny Zuko, once you look past his amiable, friendly exterior, you find out he's still not the greatest. Oh, and like Danny, his romantic interest completely changed herself to fit in with his narrative.

Love Never Dies was an attempt at a sequel to a the incredibly long-running Phantom of the Opera. It was judged to be poor conceived and poorly executed, and was an expensive, disappointing flop. Enough said.

More like this
It’s Official: The UK Is Hosting Eurovision 2023
By Sam Ramsden and Rachel Mantock
An Ultimate Guide To The Music Of 'Rap Sh!t'
By Brad Witter
How Lady Gaga & Adele Are Closer To The EGOT All Of A Sudden
By Jake Viswanath
Woodstock Co-Founder Michael Lang Faced Several Lawsuits After The 1999 Festival
By Brad Witter
Get Even More From Bustle — Sign Up For The Newsletter