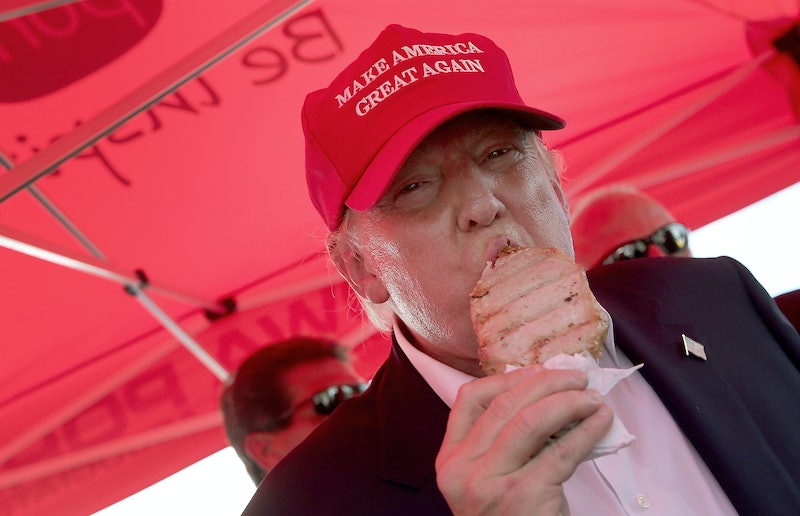 In 2007, The Apprentice star — and, oh yeah, current GOP frontrunner — Donald Trump partnered up with Sharper Image and was featured on their June 2007 catalogue cover. The future presidential candidate was promoting Trump's line of elite steaks, sold exclusively at the electronic gadget store. That fact could actually stand alone as the punchline. Recently, the business added the Trump Steaks ad to its catalogue for kicks and giggles, disclaiming that they're no longer available.

Unfortunately, Trump Steaks are no longer available, but their legacy endures. And, whether you think Donald Trump's candidacy is real steak or just sizzle, we hope you'll enjoy this blast from the past. After all, what other catalog can boast a Presidential candidate on its cover?

Maybe the billionaire's political campaign is the Trump Steak of the decade. It was new and trendy... but now, it's insignificant. Some small part of me thinks that Donald Trump will announce his presidential bid was a hoax if he becomes Republican nominee. His campaign has been consistently congested with inflammatory statements, childish insults, and — oh, how I hate to admit it — pretty hilarious Ted Cruz comebacks. In a lot of ways, Trump's running for president is pretty ridiculous. As is the fact that he defended his penis size during a nationally televised debate on Thursday evening. When events like this occur, one particular question comes to mind: What has the world come to?

That loaded question can be approached humorously or grimly, similarly to the way I wanted to laugh at and then cry for America's declining reputation after British parliament members publicly called Trump a "buffoon" and "wazzock" in January. In light of the fact that Trump won Mississippi and Michigan on Tuesday and is currently leading the race by a margin of 99 delegates, a more lighthearted approach might be the answer to our inner grief. Trump's unsuccessful steak selling endeavors are the perfect place to start. Here are some of the best jokes about what Trump dubbed the "world's greatest steaks."

1) Trump Even Lies About His Steaks

More than anything, this is a humorous scenario. According to various Tweets, Trump displayed and served what seemed to be all Trump products at a Press Conference on Tuesday. Soon, word got out that the steaks had a Bush Brothers logo on the packaging.

2) "When it comes to great steaks, I've just raised the stakes."

That actually comes straight from Trump's promotional video for his steaks. When Trump's not being vicious, he's pretty cheesy.

3) Trump Attack Ad: "Don't have buyer's remorse. The Steaks are too high in this election."

In December a super PAC called New Day for America aired a web ad that attacked Trump by dubbing his bragging with customer complaints about steaks. The super PAC also pioneered an accompanying website, putasteakintrump.com.

A man at a South Carolina Rally just couldn't get past the steak jokes. The sign was apparently referring to an earlier instance in a New Hampshire restaurant when Trump went into detail describing a well-done steak. The man seemed to be putting Trump down for his preference of steak that's cooked all the way through. Live on the edge a little, Trump.

Perhaps the most clever yet.

With one bite of steak, Trump allegedly ruined his reputation.

Not a bad slogan.

Now we just need some hats with that slogan.