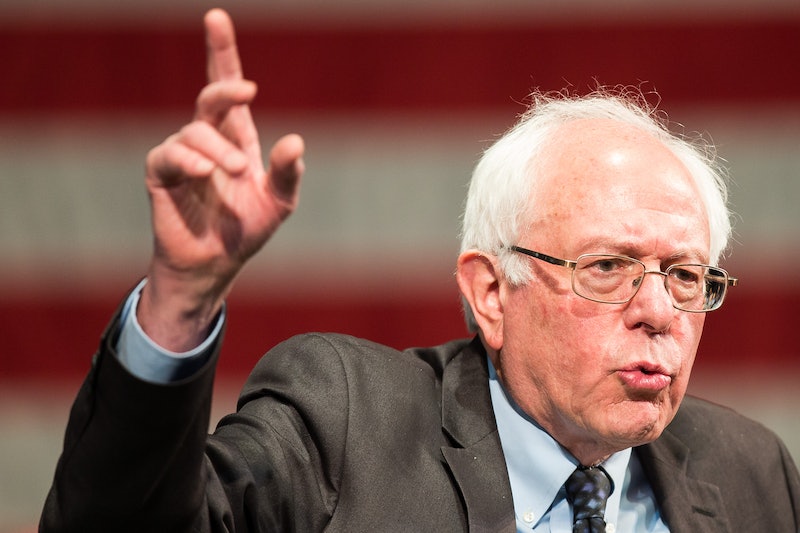 The pollsters and pundits predicted otherwise, but Bernie Sanders went on to snag an upset in Michigan Tuesday night. Sanders was able to win the state, though by a small margin of just a little under 20,000 votes. But his win isn't remarkable for its margin — it's remarkable because the polls told a completely different story. RealClearPolitics polling average had him going into Tuesday trailing Hillary Clinton by 21 points. Sanders' win in Michigan is a huge upset when comparing the final poll numbers and the election results. It even caught stats genius Nate Silver by surprise.

As of 3:43 p.m. ET Tuesday, Silver's FiveThirtyEight gave Clinton a 99 percent chance of winning the state of Michigan. Silver said in a post on his site later in the day that he thought Sanders might outperform the polls, but not to the degree that he actually did. The last candidate with such a huge lead that went on to lose a race was Walter Mondale. He led in the New Hampshire primary by 17 points in 1984, but proceeded to lose to Gary Hart. Did Sanders some how bend the laws of statistics in the Mitten State?

Sanders' win does not bring him up to Clinton's total number of pledged delegates, but it nearly keeps him on track with Silver's "Bernie Sanders's Path to the Nomination," which had him winning Michigan if Clinton and Sanders walked into Tuesday tied nationally overall. According to Silver, Sanders needed to win Michigan by 11 points, which he didn't do. But, he is hanging in there.

As for delegate specifics, Sanders won 65 to Clinton's 58 in Michigan. But Clinton lead the night because she trounced Sanders in Mississippi. taking home 87 to Sanders' 69. (That's right, he took home just four delegates in Mississippi.) As a result, Clinton's beating her delegate targets, while Sanders remains at just 86 percent of his. In no small part that comes from the Mississippi loss; he underperformed there, earning just over the minimum of 15 percent threshold to be assigned delegates.

The problem is that Sanders has already run well behind his overall delegate targets. That means he needs to be doing even better than them to really have a shot. This doesn't mean it wasn't a good night for Sanders — it definitely was. But the road ahead is long even if he pulls off what would be a shocking victory.

In a record-breaking Michigan primary, nearly 1.2 million Democrats voted, which underlines the small margin by which Sanders won. Silver suggested that perhaps the polls were wrong to begin with, but, he added, that could have been compounded by some Clinton voters staying home after seeing how her win was almost assured — or they may have even voted in the GOP primary.

What will be interesting to see is how this translates into other states in the Midwest. We'll know in a week, on Super Tuesday 3, with elections in both Illinois and Ohio.

More like this
35 Mistakes You Don't Realize You're Making In Your Backyard & Garage
By Veronika Kero
Are John Legend & Kanye West Still Friends? The Singer’s Latest Update Is Candid
By Brad Witter
Christina Aguilera Took A Powerful Stand At Brighton Pride
By Sam Ramsden
'Scream’s Courteney Cox Has Broken A Major Horror Record
By Sophie McEvoy
Get Even More From Bustle — Sign Up For The Newsletter