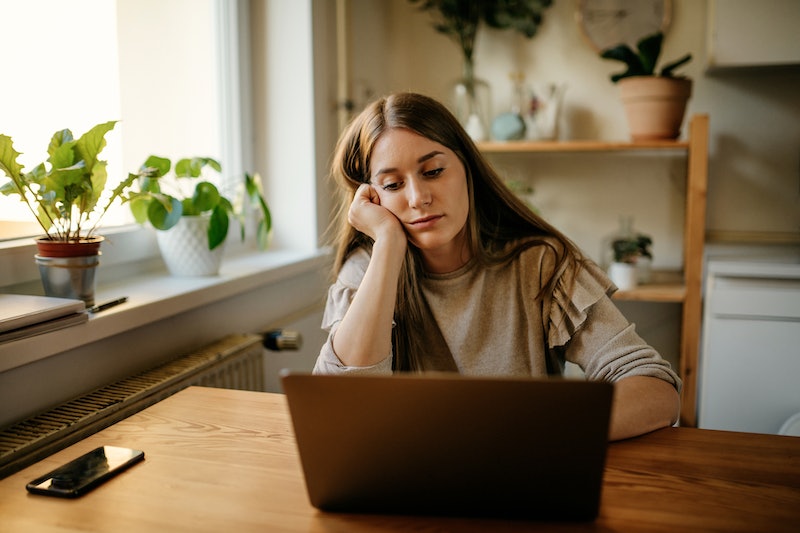 We all occasionally get a very small amount of sleep (because a party is good, because you just need to finish that book or that box set immediately, whatever). But it may be difficult to notice if this sort of thing is happening long-term. Fortunately, there are many scientific signs that you're not getting enough sleep, from Everything Is Awful emotional over-reactions to a dampened libido and a poor memory. Sleep isn't just the body replenishing its energy: it has a big regulatory role in brain function, hormonal levels, and other essential elements of normal bodily existence. Without it, you may start to bump into things, forget important appointments, and be that weird person sleeping on a stranger's shoulder on the train.

If you notice a combination of these seven signs happening to you, whether from a series of late nights or a creeping tendency to skip on a few hours to catch up on Netflix, you need to get yourself back into a regular rhythm of good unbroken slumber. As you'll probably guess from the seven symptoms of insufficient sleep, not getting enough is definitely not good for you, and will have long-term health consequences that will be trickier to undo than just sleeping in.

Here are seven signs that you definitely need to hit the snooze button, go to bed earlier, or stop fiddling with your iPhone until 2 a.m.

1. You're Not Showing Interest In Sex

If you're feeling about as keen to hit the sack as you are to bungee-jump, it may be a sign of sleep deprivation. Libido drops are definitely linked to lower sleep levels; WebMD has a host of different causes, from general fatigue to something called "tension tiredness," where sleep deprivation causes anxiety and annoyance. But there's a further reason: levels of testosterone, the hormone that's linked to both aggression and the libidos of both sexes, have been shown to drop in the sleep-deprived, at least in men. A University of Chicago study found that testosterone levels in men who were sleep deprived were significantly lower than those with normal sleep cycles.

2. Your Reaction Times Are Slow

This is one of the primary signs of sleep deprivation, and it's one of the reasons that people who haven't had sufficient rest are actively discouraged from driving or operating heavy machinery. The body's innate "reaction time" is its ability to respond to sudden stimuli, from loud noises to a bike bell sounding from behind. A study by the University of Texas measured the reaction times of subjects after a period of 24-hour disturbed sleep, and found that just one night meant their reaction times were 2.4 percent slower, which could be the difference between a safe trip and a car accident.

3. Your Emotions Are Out Of Whack

If you're sobbing because your socks don't match, it may well be a sign of poor sleep. Our ability to keep our emotions on an even keel and in proportion to events is known as emotional regulation, and that's what sleep messes with. We've known for ages that sleep disruption messes with our emotions (a 1999 study found that insufficient sleep particularly upsets the emotional equilibrium of teenagers), but a 2015 study revealed in New Scientist pinpointed what happens to our emotions when we're badly rested. It turns out that sleep deprivation renders the emotional centers of our brains incapable of ranking emotional stimuli; in other words, they make everything, even tiny events, a big distracting emotional deal.

4. You Have Sensations Of Fatigue

Fatigue is a particular kind of tiredness, more extreme than just "a bit fuzzy". The Mayo Clinic defines it as "a nearly constant state of weariness that develops over time and reduces your energy, motivation and concentration," and it has very real physical affects on your body. For one, it significantly impacts your ability to balance; for another, it interferes with your body's proprioception, or sense of itself in the world in relation to other objects. That's why people with jet lag, for instance, bump into things and don't seem particularly aware of where they're putting their limbs; they genuinely don't.

Yes, you can officially blame forgetting your best friend's birthday on your lack of sleep lately. Sleep has a direct relationship with the establishment of memories in the brain; a 2013 study found that a bit of sleep deprivation interferes with the pathway that embeds memories long-term. It turns out that particular brain waves work while we're in very deep sleep to "store" memories in the prefrontal cortex, and that without that sleep they're far less likely to lodge.

A lack of sleep may also, according to a study with mice, lead to a build-up of a particular protein in the brain called beta amyloid. In sleep-deprived mice, the levels of beta amyloid in the brain were much higher, and that particular deposit pattern in humans seems tied to memory problems.

6. You Can Doze Off Even While In A Stimulating Environment

The more sleep deprived you are, the more capable your body becomes at ignoring external stimuli and slipping into sleep. Effectively, tiredness makes your body able to tune out things that would otherwise keep it awake: bright lights, loud noise, your cat jumping on and off your bladder every 30 seconds. This is why some people are encouraged to have a bit of sleep deprivation if they need to sleep on a long-haul flight; many find it tricky to sleep on planes due to the invasive noise of the engines, but sleep deprivation lowers that threshold and makes sleep in a noisy environment easier.

This is an interesting one: if you're gaining weight and can't really pinpoint a reason why, it may be down to poor sleep. Various studies have tied poor sleep habits to factors that increase the risk of weight gain, from lowered levels of appetite-suppressing chemicals in the body to a higher propensity to pick calorie-rich food. It appears the body reacts to bad sleep by packing on weight. The Mayo Clinic reported in 2015 that a study showed women who slept fewer than five hours per night were more likely to gain 11 pounds than women who had the proper amount (nine hours). Interestingly, the women who over-indulged in sleep had the same weight gain likelihood, so too much sleep can indeed be bad for you too.

More like this
Why Experts Say Sleeping With A Fan On Isn’t Totally Risk-Free
By Sophie McEvoy
The 3 Most Calm Zodiac Signs, According To Astrologers
By Kristine Fellizar
I Tried TikTok’s Favorite Menstrual Cup & Here Are My Honest Thoughts
By Meguire Hennes
Here's Why Your Nose Runs When You Eat
By Carolyn Steber
Get Even More From Bustle — Sign Up For The Newsletter