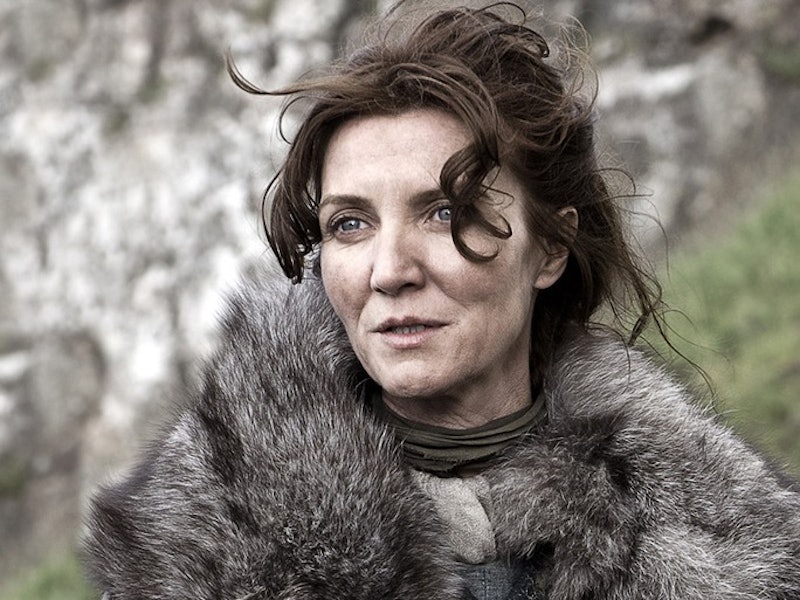 Game of Thrones has managed to produce some truly monumental character deaths throughout the years that will be seared into my subconscious from now until the end of time. I'm talking tragedy-level type of stuff here. However, if I had to narrow my grief down to one particular place and person, it would probably be Catelyn Stark's Red Wedding death. Whether you knew this massacre was coming or not, it left us all emotionally devastated and served as a catalyst for everything else that was to come. But is that really where this character's story is meant to end or will Lady Stoneheart finally appear in Game of Thrones Season 6?

For those of you who have no idea what I'm talking about, let me take a moment to clarify things. (Book spoilers ahead!) In George R.R. Martin's novel series A Song of Ice and Fire, Catelyn Stark is eventually resurrected as a corpse after her Red Wedding death and becomes known as Lady Stoneheart, hellbent on seeking retribution on those who have wronged her. Sounds pretty exciting, right? The only problem is that this is one major aspect of the books that the producers seem unwilling to explore. In fact, showrunners David Benioff and D.B. Weiss have come right out and admitted to Entertainment Weekly that it's not something they're interested in doing. But is that really the case or are they just messing with us?

The introduction of Lady Stoneheart would be a huge plot development for the series and not one that the producers would necessarily want their audience to know about in advance. So really, they could just be lying through their teeth and waiting for the perfect moment to shock us with this character return. And something tells me that Season 6 would be the perfect opportunity for Lady Stoneheart to make her debut. Why? Because she's already been placed front and center of the latest promotional posters.

OK, so technically this could just represent an image of characters who have died since the posters also show deceased iterations of Robert and Joffrey Baratheon, Ned Stark, and even Jon Snow. But therein lies the genius of it all. The posters also feature the very dead looking faces of Cersei, Tyrion, Sansa, etc. — all of whom are still alive. By incorporating all of these characters together, it blurs the line between the living and the dead. And since we already suspect that Jon Snow won't stay dead for long, why can't the same be said for Catelyn Stark as well? After all, she does have quite a bit of unfinished business to be getting on with.

To be betrayed in such a way and forced to watch as your eldest son is murdered, with no means to stop it, can only be described as a mother's worst nightmare. Never mind the fact that she had already lost her husband and hadn't seen the rest of her children for quite some time. This woman knows what it means to suffer and she deserves the chance to finally get her revenge.

But just in case the poster alone isn't a big enough hint, how about the fact that Clive Russell, who plays Catelyn's uncle Brynden "Blackfish" Tully, will be returning to the show in Season 6, according to WatchersOnTheWall.com, for a battle with the Lannisters at Riverrun. This offers up the perfect opportunity for Lady Stoneheart to make her debut, otherwise why bother including this particular storyline at all? So come on, GoT writers — it's time to give the people what they so desperately want.

More like this
Netflix Shut Down 'Bridgerton' S3 Rumours About A “Very Dark” Storyline
By Bustle
'GoT' Star Emilia Clarke Says She "Just Can't" Watch 'House Of The Dragon'
By Brad Witter
'The Last Of Us' Episode 4 Put Twitter Into An Emotional Spiral
By Alyssa Lapid
Bill & Frank’s 'The Last Of Us' Episode Has Twitter Emotionally Wrecked
By Alyssa Lapid
Get Even More From Bustle — Sign Up For The Newsletter
From hair trends to relationship advice, our daily newsletter has everything you need to sound like a person who’s on TikTok, even if you aren’t.