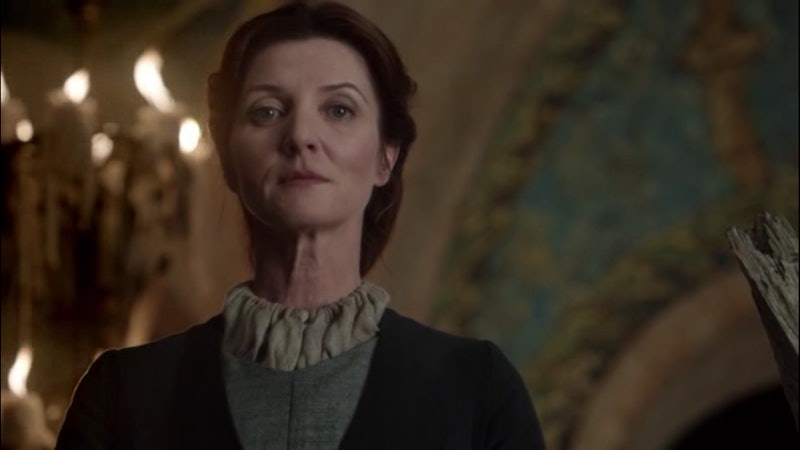 Few could forget Catelyn Stark's horrible, gruesome, and incredibly depressing death in Season 3 of Game of Thrones. Regardless of feelings towards the Stark matriarch, watching her mourn the death of her son, daughter-in-law, unborn grandchild, and all of the Stark bannerman — and watching her be murdered herself immediately afterwards — was tough for any fan to take. Hadn't the woman already been through enough? Was the Red Wedding really all that necessary, George R.R. Martin? Was it?! Anyway, my personal feelings of rage about this scene aside, I'm beginning to wonder if — despite denial from producers — there's the possibility Catelyn Stark could come back in Season 6 of Game of Thrones. Why? None other than the new Game Of Thrones posters have given me reason to question if the Stark matriarch will be alive-ish come Season 6, if not kicking her undead heels.

Though the HBO series has left a few things from the Song of Ice and Fire books out — as well as changed some plotlines — I have to wonder if Lady Stoneheart, aka the resurrected Mrs. Stark, will really be one of them, considering she features prominently in the storyline of the books. And the posters have given me more reason to wonder: Despite having been killed off on the series, she's featured on a poster! WHAT DOES IT MEAN?!

I can only hope that she's going to eventually get her moment in the sun — so why not in Season 6(coming to your tv screens and HBO Go accounts April 24th!)? There have been a few other hints, too:

In HBO's latest bid to increase anticipation for the series, new Game of Thrones promotional posters featuring whole bunch of characters' sleeping faces hit the web in February 2016. A lot of our favorites, alive and dead, are featured — live characters ranging from Arya to Daenerys to Cersei, and dead characters ranging from Catelyn to Joffrey to even Ned. But, what does this mean? Are all of these live characters going to join the dead in the House of Black and White's Hall of Faces, or are these dead characters going to join the living in Westeros?

2.The Existence Of Lady Stoneheart In The ASOIAF Series

In the ASOIAF books, Beric Dondarrion hooks Catelyn Stark up with the kiss of life and she comes back as Lady Stoneheart. And all this Lady Stoneheart wants to do is get vengeance for all the people in her family who have been murdered, so she takes over leadership of the Brotherhood Without Banners, a group of ragtag outlaws. Though even Michelle Fairley implied in a 2014 interview with EW that Lady Stoneheart won't be part of the series, according to Watchers on the Wall, a casting call went up in June 2015 for members of an "outlaw band" — so like... does that mean Lady Stoneheart's army is being gathered? What band of outlaws is complete without a leader?

In an interview with The Telegraph, Michelle Fairley let slip she wouldn't be under contract for Season 6 — but that doesn't mean she won't appear at all. She wouldn't need to be under contract if she was only appearing in one or two episodes. It wouldn't surprise me if this contract information she dropped is just to throw us off the scent as Game of Thrones stars are wont to do (I'm looking at you, Maisie Williams, with your hinting about the life/death of our beloved Jon Snow).

4. Brienne's Storyline Is At A Standstill

Just as Catelyn Stark and Brienne are directly linked in the books, so are Brienne and Lady Stoneheart. In fact, Stoneheart goes as far as to use Brienne to trap Jaime Lannister. Since both Brienne and Jaime's storyline slowed down at the end of Season 5, wouldn't it make sense that the showrunners use Season 6 to really make everything explode? The addition of Lady Stoneheart might be the only thing that puts Brienne of Tarth back on track.

Just as with all the storylines of Game of Thrones characters, we are all completely unsure of what's going to happen in Season 6. There's only one way to find out, and that is to wait until the premiere date of Season 6 on April 24. Until then, GoT fans, may I suggest stocking up on tissue boxes? Winter is assuredly coming, and that always means the sniffles. And heaving sobs.