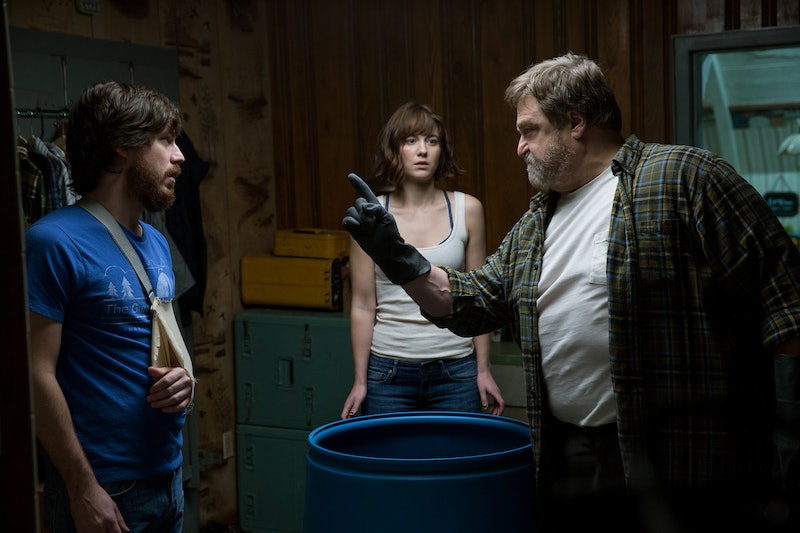 It's almost time for 10 Cloverfield Lane to be released in theaters, and fans are going crazy with anticipation. Every day that goes by without a new detail or online hunt for spoilers is a day where we are left wondering, what the hell is this movie even about? As a follow up, or close relative, of the 2008 monster movie hit Cloverfield, 10 Cloverfield Lane is, by definition a mystery. When the film was announced and the first trailer was released, a few details were revealed. For example, clearly showcased in the trailer were stars Mary Elizabeth Winstead, John Gallagher Jr. and John Goodman. Snippets of dialogue let slip that they were stuck in a bunker, with Winstead's character apparently being kept against her will, and that, according to Goodman, everyone else is dead. Other than the information already given away in the trailers for the film, little to no information has been leaked, which has left fans like myself with some big questions about 10 Cloverfield Lane .

Director Dan Trachtenberg, producer J.J. Abrams, and the main cast have all kept their mouths shut when it comes to potential spoilers. Every answer in the press has been vague at best, every clue hard to spot. And, while Winstead did spill some spoilers when she spoke to Bustle, the actor made sure not to divulge too much, leaving fans with nine big questions about 10 Cloverfield Lane fans still need answered.

1. What Is 10 Cloverfield Lane About?

Cloverfield was about monsters who invade New York and, essentially, kill everyone, but there are no such monsters seen in the trailers for 10 Cloverfield Lane. Moreover, the clips all appear to take place inside the bunker, suggesting that the characters never go outside. If 10 Cloverfield Lane isn't about people trying to outrun a monster like in Cloverfield, what is it about?

The trailers boast that "Monsters Come In Many Forms," suggesting that the monster in 10 Cloverfield Lane is not the same monster as in Cloverfield. In fact, it might not be the same kind of monster. Could the monster be human? And, in that case, who is it?

3. Can We Trust John Goodman?

John Goodman's character, Howard, says he saved Michelle (Winstead) in the trailers, but he also looks creepy as hell. Other clips show him fighting with Michelle, which makes it look like he's a bad guy. But, why would a bad guy save her?

4. What Is The Connection To Cloverfield?

Seriously. WHAT. If it's not the monster, and it's not necessarily even the same event, then what connects the two?

5. What's Up With All The Eiffel Towers?

Shots of the bunker in the trailer reveal that the walls are covered in Eiffel Tower posters and images. Michelle is even wearing a shirt with the landmark on it. Why is Paris so present in the bunker?

6. Why Is Mary Elizabeth Winstead Chained Up?

If Howard really wanted to save Michelle, couldn't he just, I don't know, not handcuff her to a creepy cell wall? Something else is definitely going on here. And whatever it is, it definitely isn't for her safety.

If you've seen Cloverfield, then you know that the likelihood of leaving the theater after 10 Cloverfield Lane with all questions answered is basically zero. Still, a girl can't help but wonder whether any of the three characters shown in the trailer will actually survive the movie.

8. What's Up With John Gallagher Jr.?

Most of the 10 Cloverfield Lane buzz has been about John Goodman and Mary Elizabeth Winstead, as they are more heavily featured in the trailers, but what's up with John Gallagher Jr.'s character? Why is his arm in a sling? Is he good, bad, or somewhere in between, and why is he even in the bunker?

9. What If It Has Nothing To Do With Cloverfield?

So, hear me out on this one. I've been thinking about all the secrecy and theories about 10 Cloverfield Lane, and it occurred to me: what if the movie has absolutely nothing to do with Cloverfield? What if the title is the MacGuffin — just something catchy to draw us in and make us think we're seeing one thing when we're really seeing another?

Who knows if 10 Cloverfield Lane will answer all of these questions, but one thing I do know for sure is none of them will be answered before the film's release on March 11.