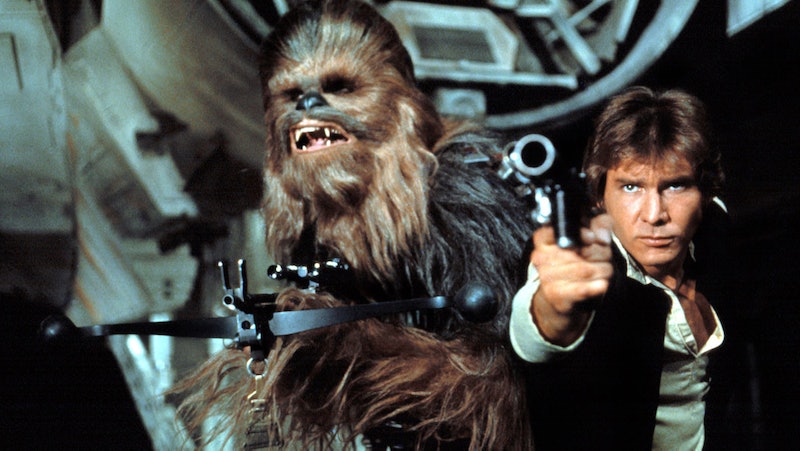 Long before the Chewbacca and Han Solo were rescuing Ray and Finn from the dreaded Empire, they were co-pilots, smugglers searching the galaxy aboard the Millennium Falcon for the next best exchange. But, ever wondered what these two besties were up to before that? Good news: You don't have to anymore. A new standalone Star Wars movie is going to answer that question by exploring the long-standing and thick-as-thieves friendship between the duo — an origin story about Han Solo and Chewbacca’s friendship, if you will. And while most plot details beyond that are being kept secret, according to Variety, the new film is scheduled to be released after Star Wars VIII in 2018. And, you know what? That’s enough for me to look forward to, because Chewie and Han have one of the best friendships in cinematic history. In fact, over the course of the Star Wars franchise, there have been so many times when Han Solo and Chewbacca were totally #FriendshipGoals.

And doesn’t hearing that their relationship goes way, way back, make you even more inclined to celebrate their long-standing friendship and the loyalty that they have for each other? Of course it does — nobody does friendship like these two, not in all of the galaxies, and all of our friendships could benefit from learning a thing or two from them.

1. When They Stuck Together In Spite Of The Bounty On Their Heads

Most people would have split up, but these besties are there for each other until the end.

2. When They Struck Out On Their Own Instead Of Following The Tide

When everyone else went off to fight the rebellion, these two stuck together and stayed out of some serious trouble.

3. When They Had Each Other’s Backs

Even though they didn’t join the rebellion, they stuck together and fought next to each other in the Battle of Yavin. Never let your best friend fight alone. These two prove that.

4. When They Made Sure Nobody Got Left Behind

In any number of engagements against the Empire, these two always made sure that the other one was safe and made it out alive. Which is basically like best friend code.

5. When Chewie Followed Han To The Ends Of The Universe

When Solo was taken by Boba Fett to Jabba the Hutt, you better believe Chewbacca was the first one to go after him. Real friends are the first to jump to their BFF's defense.

6. When They Accomplished So Much More Together

Some of the biggest coups against the Empire have been at the hands of Chewbacca and Han Solo — like the time they destroyed the Death Star and the Death Star II. Make no mistake about it, these two are so much stronger when they work together.

7. When They Came Back Together And It Was Like No Time Had Passed

After Endor, Chewie went back to Kashyyyk to be with his family. But, he couldn’t stay away for long: Eventually he returned to Han’s side, and it was like no time had passed at all. Kind of like when you go three months without talking to your best friend and then, when you finally do, it’s as if nothing has changed.

8. When Chewie Chokes Out Lando Calrissian For Betraying The Group

Just like your best friend would do if anyone ever put you in danger.

9. When They Understand Each Other Without Even Talking

With your best friends, you don’t even need words to know what they’re saying.

10. Because They've Been Through So Much Together

Sometimes, you can't remember life without your best friend. And for these two, it's exactly the same. They've been through so much together that it seems like they've never been apart.

11. When They Pulled Fast Ones To Get Each Other Out Of Trouble

Kind of like that time you told your best friend's parents you were really at your house the whole time. Works every time.

12. When They Provided A United Front

Because you never let your best friend handle important things alone, and neither do Chewbacca and Han Solo.

13. When They Were Each Other's Wingmen

While Han Solo went off to try and rescue the girl (who was perfectly capable of rescuing herself, but OK, besides the point), Chewbacca always had impeccable timing, hanging back and letting him have his moment.

So take a lesson from these two if your friendships are feeling at all stuck. Their relationship has stood the test of time.