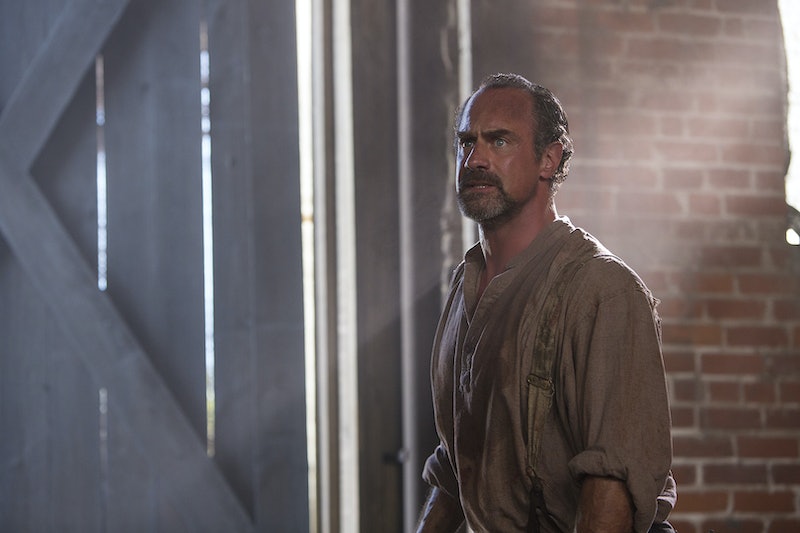 Underground deals in one of the most troubling periods in American history, a time that many Americans would likely sooner forget than revisit. And Underground 's portrayal of slavery isn't shying away from showing the time period in an honest, brutal fashion, not just in the physical actions of its characters, but also in the emotional duality that some embody. At the beginning of the premiere episode, it seems that August Pullman — played by Christopher Meloni who you likely recognize from Law & Order: SVU and Wet Hot American Summer — is one of the "good" white characters that appears in many Hollywood depictions of slavery, a character that viewers can get behind and root for as he risks his own life to help slaves escape. However, instead of playing into this trope, Underground uses August to completely subvert it.

August is seen, early in the episode, assisting an escaped slave on the run from her plantation. He offers some advice, tells her how to clean herself to avoid those trying to catch her, and hides the woman in the back of his cart. It seems like an awfully risky move for a white man in the south to help a random slave hide. At this point, many viewers were likely thinking, "surely this is a kind-hearted man, who will be helping slaves escape along the titular Underground Railroad." Those viewers ended up being very disappointed.

By the end of the episode, the audience is instilled with a strong sense of distrust that will carry on through future installments of Underground, as it is revealed that August isn't the helpful man he appears to be. In the closing scenes of the premiere, August is revealed to actually be a slave catcher who uses kindness as a trap to bring escaped slaves back to their plantations for profit.

While this reveal is shocking and shows that August is nothing like his kind façade, in a world where villains in slave narratives are often over-the-top and cartoonishly evil, he is frighteningly normal. But that dissonance drives home the point of the character — the people who profited off of slavery weren't always cackling supervillains, some were average people who did terrible things to profit from a horrific culture. If Underground continues to show villains as complex as August, it may become one of the most emotionally challenging and important series on TV.