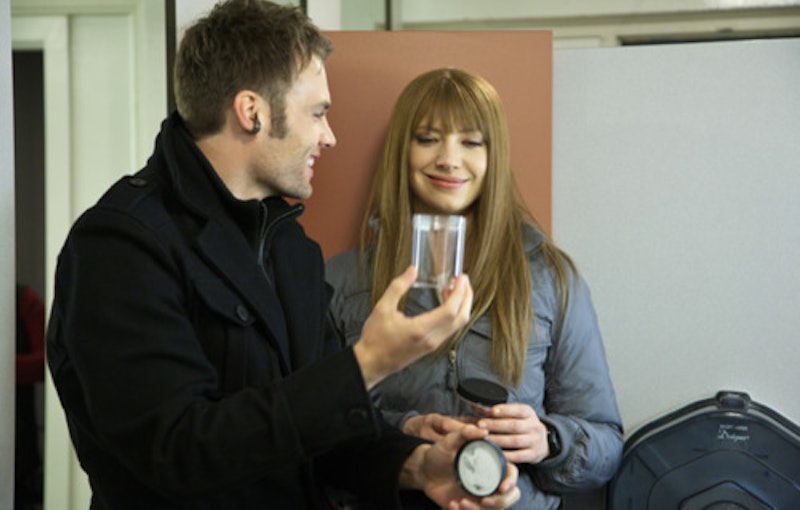 In the world of Fringe, a lot of emphasis was placed on the relationship between the star-crossed lovers that were Peter and Olivia. However, another relationship deserved just as much attention, too — and that would be the one between Lincoln and Olivia. The reasoning is simple: Their partnership transcended time and space, and was both beautiful and heartbreaking. For me, Lincoln and Olivia were Fringe 's OTP. No matter how many versions of Lincoln and Olivia the show could conjure — there were roughly four — they always had each other's backs, and Lincoln Lee loved Olivia in every universe. Excuse me, I need a second to swoon.

As Fringe's dimension-hopping became more and more unintelligible, Lincoln and Olivia became a constant for the fans to hold onto. Yes, the Olivias seemed destined to carry a torch for Peter, even when Peter was blinked out of existence — but Lincoln was there to help Olivia solve cases, deal with her losses, and just generally be the best partner he could possibly be. As for Olivia, there is no denying her life was always better with a version of Lincoln in it. She may not have fallen as hard for Lincoln as he did for her, but she valued his friendship and his willingness to tell what she needed to hear rather than what she wanted to hear.

Every version of Lincoln and Olivia could have had it all (and at least one of them did), and here are 11 reasons why they were Fringe 's best couple.

In the first alternate universe introduced on the show, Lincoln and Olivia were best friends. They teased each other, they laughed at each other's corny jokes, and they knew each other on a level no one else could — and it was mesmerizing.

2. They Trusted Each Other Implicitly

When Alt!Olivia was giving birth to her son with Peter, she trusted Lincoln to choose to save the baby if it came down to it. She asked him to be the one to tell her mother if she didn't make it through the delivery. The trust these two shared was unwavering, and it spilled over into the prime versions of the characters as well.

3. In Every Universe, They Found Each Other

There was not one single universe in which Lincoln and Olivia were not part of each other's lives in some capacity. I'm not a big believer in destiny, but it's hard to ignore something when every universe makes it happen.

4. They Balanced Each Other Out

Whenever Olivia or Lincoln went too far, the other one was there to make them see reason. Lincoln was always just a little bit calmer and less emotional than Olivia, and Olivia was always there to push Lincoln out of his comfort zone. No matter how different their personalities were in other ways, this one facet of who they were remained constant — no matter which Olivia and Lincoln the show paired up.

5. They Kicked Butt Together

The couple that kicks butt together stays together. That's an actual rule of romance.

6. Lincoln Chose To Be In A Universe Where Olivia Needed Him

When Alt!Olivia lost her Lincoln, the Lincoln from the prime universe chose to stay with her. He found a purpose by her side and helped her process her loss.

The prime Olivia ultimately found Peter again, but she didn't regret the time she spent with Lincoln. He was a valuable part of her life, just as much as she was an essential part of his.

8. Lincoln Thought Every Olivia He Met Was Remarkable

There was no version of Olivia Dunham that Lincoln Lee did not think was a brilliant, amazing woman. Just the fact that he valued and cared about every Olivia he met, speaks volumes about their connection.

9. They Had A Beautiful Family Together

While prime Olivia was busy averting apocalypses and what have you with Peter, Alt!Olivia was building a stable, exciting, and rewarding life with Lincoln and their son. They proved to be a couple that could stand the test of time.

10. They Grew Old Together

They defied the odds, and crossed over to other universes just so at least one version of them could grow old together. I'm sorry, but I am only human and that is beautiful.

11. Every Version Of Them Was In Love To Some Degree

Platonic love, romantic love, unrequited love — Lincoln and Olivia were connected on a level that transcended all logic. They were each other's person, and they were at their best when they were together.

I will never get over the perfection of Lincoln and Olivia. They may not have been Fringe's primary love story, but in my universe their love was the star of the show.