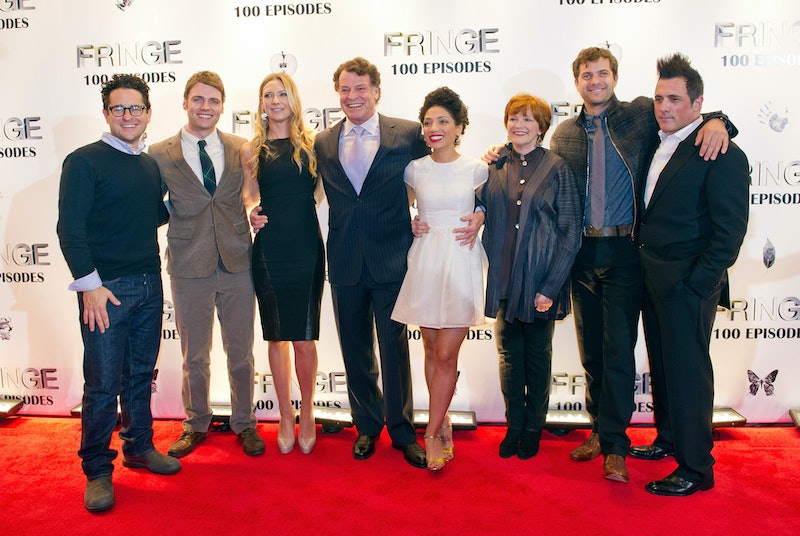 Perhaps the hardest part of watching a favorite, long-running television series come to an end is bidding farewell to the beloved cast of characters. Whatever the series is, saying goodbye is definitely the hardest thing to do. Sometimes the only solace you can find is in watching that beloved cast pop up in other movies and TV shows over the ensuing years. So, that in mind — if you, like me, are still mourning the series finale of Fox's terrific sci-fi series Fringe , take comfort in the fact that its cast and crew are up to great things, even if those great things are not Fringe. Take what we can get, right?

When Fringe aired its pilot in the fall of 2008, Anna Torv was just an unknown Australian actress; Joshua Jackson was trying hard to shed his image as Dawson Creek's Pacey; John Noble was Boromir's crazy dad in The Lord Of The Rings. Little did we all suspect on that fateful September day that these three actors — and the rest of the show's terrific cast — would go on to craft some of the most complex and memorable characters in sci-fi history.

Here's where they have all ended up, two-and-a-half years after Fringe took its final bow in Jan. 2013:

Torv starred in Ryan Murphy's 2014 drama pilot Open for HBO, which, as Deadline detailed, was meant to be a "provocative exploration of human sexuality and relationships." Torv would have played a yoga instructor named Windsor, alongside Jennifer Jason Leigh as her partner Holly, Michelle Monaghan as her crush Grace, Scott Speedman as Grace's husband Jonathan, and Wes Bentley and Jaimie Alexander as another married couple. Sadly, HBO passed on Open , and announced last fall that the pilot wouldn't be proceeding to series. This year, Torv stars with Geoffrey Rush, Sam Neill, and John Noble's LOTR cast mate Miranda Otto in an Australian film called The Daughter , an adaptation of Henrik Ibsen's The Wild Duck that will premiere at the Toronto International Film Festival this September. Additionally, she's slated to star in next year's fantasy/horror movie Stephanie , by Fringe writer/director Akiva Goldsman and co-starring Captain America baddie Frank Grillo.

Jackson didn't waste any time finding his next television project. One year after Fringe wrapped, he was starring on Showtime's new acclaimed drama, The Affair. He plays jilted husband Cole, whose wife Alison (Ruth Wilson) is off canoodling with Dominic West's Noah. Thankfully, things are looking up for him in Season 2: Oscar nominee Catalina Sandino Moreno was recently cast as Cole's new love interest.

Over the past couple of years, Noble has guest starred on a handful of shows, including The Good Wife, Rake, and Forever. He segued a recurring part on Sleepy Hollow's freshman season as "sin eater" Henry Parrish into a full-blown series regular role in Season 2. Henry may have been killed in the finale, but Noble will already be back on your screen this fall: he was added to the main cast of CBS's Elementary as Sherlock's imposing father.

After Walter's Harvard lab closed its doors, Nicole ventured over to the creepy town of Night Vale; she has voiced the character Intern Dana on five episodes of the popular sci-fi podcast Welcome To Night Vale. You may also have caught her on the past two seasons of Scandal in a recurring role as Huck's estranged wife Kim.

Since Fringe wrapped, Reddick has appeared in six films — including the Channing Tatum action movie White House Down and the Keanu Reeves thriller John Wick — and has guest starred on a number of TV shows — including The Blacklist, Castle, and American Horror Story, on which he played demonic Papa Legba in Season 3's Coven.

Brown, an Emmy nominee for her own '80s NBC sitcom The Days And Nights Of Molly Dodd, has continued to guest star on TV shows like Forever, The Affair, and Person Of Interest. Most recently, she had a recurring arc on Season 3 of Orange Is The New Black as Judy King, a new Martha Stewart-esque inmate at Litchfield.

In 2013, Acevedo recurred on The Walking Dead as Mitch, one of The Governor's loyal followers. Last year, he appeared in Dawn Of The Planet Of The Apes as Carver, the human who instigates the conflict between man and ape by accidentally shooting one of Caesar's tribe. And earlier this year, he recurred on Marvel's Agents Of S.H.I.E.L.D. as Thomas Calderon, one of the leaders of "real S.H.I.E.L.D."

The chrome domed Observer recently recurred on Season 6 of CBS's The Good Wife as villainous State's Attorney James Castro. Two months ago, he won his second Tony Award for his lead role in the new Broadway musical Fun Home. (He previously won in 2004 for Stephen Sondheim's Assassins.)

While you may have caught him at your local cinema in films like Lincoln, The Mortal Instruments: City Of Bones, Pompeii, Poltergeist, or this summer's The Man From U.N.C.L.E., this Fringe baddie is most famous for his role as Lane Pryce on Mad Men, a role which won him an Emmy nomination... and the most memorable exit from the AMC drama.

Altlivia's hunky husband starred for four seasons on Cinemax's action series Strike Back, which just wrapped its run last month. Last year, he appeared in several episodes of the Fox limited series event 24: Live Another Day. This fall, he will star in his own NBC drama The Player, alongside Wesley Snipes.

Abrams, who not only co-created the show and executive produced it through its run, but also composed Fringe's iconic theme music, will soon be taking moviegoers to a galaxy far, far away. The Star Trek director has taken the leap from one geek franchise to another, and will be delivering Star Wars: Episode VII — The Force Awakens to theaters this December. May the Force be with him.