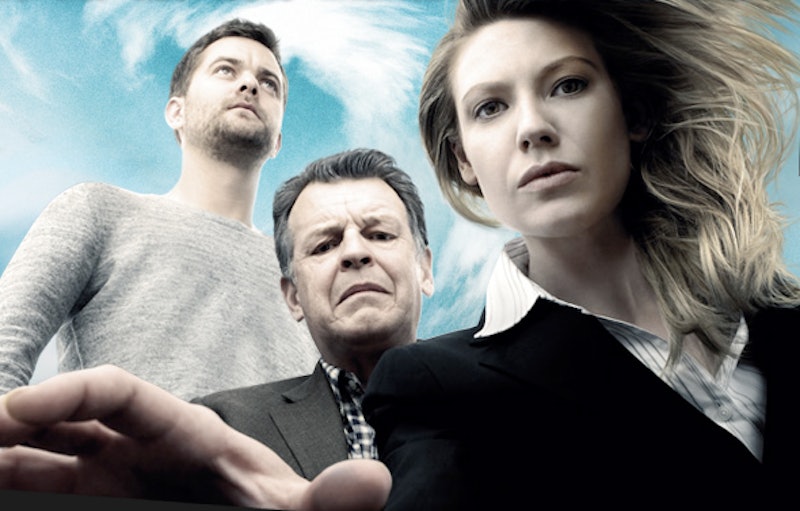 In the years following the ferociously successful debut of ABC's Lost , pretty much every network on television attempted to get in on the soapy-serialized-mystery-sci-fi game. Think FlashForward and V on ABC, Alcatraz and Terra Nova on FOX, or The Event and Persons Unknown on NBC. Pretty much the only one that was successful — both in terms of ratings and critical accolades — was FOX's Fringe , created by Lost maven J.J. Abrams himself. (Coincidence? Maybe, considering how big of a flop Abrams' Alcatraz was.) Ratings may have dwindled from the series' Season 1 highs, but the show still lasted five years and often out-did FOX's own seminal sci-fi series The X-Files when it came to supremely weird cases.

Most Fringe fans agree that the show became better as the seasons grew increasingly less procedural and more serialized. Most of the generally agreed-upon "best" episodes of the show are the ones that most feed into its universe-spanning mythology: "There's More Than One Of Everything," "Peter," "White Tulip," "Over There," "Entrada," and obviously the series finale, "An Enemy Of Fate." Eventually, the show went full-serial in Season 5, focused on the team's all-out war with the invading Observers. But in the earlier years, the monster-of-the-week episodes were just as integral to Fringe's DNA, and they gave viewers some of the freakiest mysteries in TV history.

Here are 13 of the weirdest cases Olivia Dunham, Peter & Walter Bishop, and Astrid Farnsworth encountered in their time together:

The case: A flight from Germany to Boston lands with every soul on board dead, their corpses melted into piles of goo.

The one that started them all. Fringe's first episode was a super-sized, action-packed affair that set the wonderfully bizarre tone for everything that was to come. Not only was there the aforementioned afflicted plane, but there was also the iconic scene where FBI Agent Olivia Dunham, doped up on Walter's homemade cocktail of drugs, slips into a sensory deprivation tank to psychically link with her comatose partner/lover. This was the case that introduced viewers to The Pattern, the ominously named phenomenon that would give rise to countless monster, murder, and mayhem over the course of 100 episodes.

The case: A newspaper vendor suddenly dies when every orifice in his body is overgrown by skin, suffocating him.

Midway through the show's freshman season, hints of the underlying mythology began to peek through the seams of the procedural format. This standout episode started the same as all the others, with a series of unexplainable deaths, but the hour's conclusion — which saw Olivia avert disaster thanks to her previously latent supernatural abilities — blew the possibilities of Fringe wide open. This was no longer the story of an ordinary woman in extraordinary circumstances... it was the story of an extraordinary woman finding her place in an increasingly dangerous world.

Majority opinion holds that Season 1 is hit-or-miss, with some viewers going so far as to recommend new audiences to skip the freshman year entirely. But that's doing a disservice to the exploratory inaugural batch of episodes, which lay a lot of groundwork for the characters — and introduce viewers to a veritable menagerie of monsters, to boot. There are plenty of highlights to choose from: a woman who gives birth to an infant that dies of old age within hours; imaginary butterflies whose wings cut like razors; a viral video that liquefies brains; a man who turns into a monster in an airplane bathroom; and a child found in an underground room that had been sealed for 70 years. But this episode, which revolves around an empath whose abilities are so powerful he drives those around him to suicide, is especially memorable. His unexpected childhood connection to "Olive" gives the hour an extra boost of potency.

The case: A man walks into an office building and collapses, his veins spewing blood into the air and infecting everyone around him.

Ah, the classic "quarantine" case. In the closest thing to a bottle episode Fringe ever had, the team is forced to quarantine a building after a diseased man infects its inhabitants. And of course Olivia and Peter get trapped inside. And of course Peter starts exhibiting symptoms. And of course the disease turns out to be a resurrected virus that wiped out the Ice Age mammals 75,000 years ago. And of course it turns out the disease has such a strong desire to propagate that it forces its victims to find ways outside, including flinging themselves through plate glass windows and crashing to the ground below. Nasty stuff.

The case: An extremely localized earthquake strikes an office building in Manhattan, killing everyone inside — including a man who suddenly appears to have sprouted two extra legs, two extra arms... and an extra head.

With the Season 1 finale having conclusively revealed the existence of a parallel universe, Season 2 started to witness the first crossovers between the two realities, including this episode, in which a building is pulled from the other universe into ours, without warning, merging the architecture — and everyone inside it — into a sort of Frankenstein-esque hodgepodge of horror. (Hence the two-headed man, natch.)

OK, so this episode didn't technically feature a "case," but no list of the show's weirdest moments would be complete without mention of this strange-even-for-Fringe episode. Some scoffed at the idea of a sci-fi show attempting a musical episode, but the story that unspooled from Walter's drug-addled brain resonated in surprisingly emotional ways. The manner in which Walter dealt with his son's absence by concocting a fairy tale about him (and not hesitating to cast himself in an unfavorable light in the process) was unexpectedly poignant.

The case: A brilliant man is able to kill his victims using only a ball-point pen, by setting up elaborate, Rube Goldberg-ian chain reactions.

Season 3, which started with Olivia trapped in the parallel universe, is widely considered the strongest in Fringe history. This early episode, in which Olivia has been brainwashed to believe she belongs on the other side, sees Agent Dunham help her over-there team crack a case involving a man whose IQ has been boosted beyond genius levels by an experimental drug. (Think Limitlesss or Lucy.) The way in which the killer is able to predict all possible outcomes of the tiniest action is visualized creatively. And bonus points for Hannibal's Kacey Rohl (Abigail Hobbs) guest starring as the killer's sister.

The case: A man tracks down the donated organs of a ballerina who committed suicide in order to piece her back together into a macabre marionette.

The first eight episodes of Season 3, with Olivia and Fauxlivia existing in each other's universes, were Fringe at its most critically acclaimed. Coming off the high of that powerful string of episodes, the season's ninth episode could have easily disappointed. Instead, "Marionette" is one of the show's strongest — and creepiest — hours. The story of a mourning murderer and a grieving Olivia dovetailed beautifully. This is the perfect example of how a typically "procedural" episode can still pack a powerful punch, with themes echoing through multiple layers, all the way into viewers' hearts.

The case: A thief shot dead during the robbery of a metal depository defies the laws of gravity by floating up, up, and away like a balloon.

Time for something a bit lighter — literally! The episode's central conceit that combining osmium (the densest known element) and lutetium (a rare metal found in meteorites) would result in a material lighter than air is perhaps one of Fringe's shakier suppositions. But the resulting cases involving levitation meteor thieves is a memorable one. And any episode that guest stars Lost's Jorge Garcia (aka Hurley) as Walter's partner-in-bong-hitting friend is a winner in my book.

The case: Walter and Peter take LSD in order to enter Olivia's mind, which has been possessed by William Bell. Animated adventures ensue.

Like "Brown Betty," this episode named after Walter's favorite hallucinogenic drug doesn't exactly contain a "case" per se, but it is one of the show's weirdest outings. Christopher Nolan goes inside the mind with the use of Escher-like architecture and blaring trombones. Pixar goes inside the mind with colorful, personified emotions. Fringe goes inside Olivia's mind with the use of motion-captured animation. Not only is it a refreshing departure from the show's mold and a rollicking 45 minutes of adventure, it's also the most ambitious episode in the show's history: it took a full eight weeks to produce the 16 minutes of animation, the most hours spent on a single episode of Fringe.

The case: A series of time displacements start popping up all over the city, causing trains to speed by where there are no tracks, buildings to revert to their conditions from four years ago, and people to disintegrate into ash.

Season 3 climaxed with Peter stepping into the machine to save both parallel universes... and erasing himself from the timeline in the process. This tremendous hour, which picks up only a few episodes after Peter has made his sudden reentry into our timeline, focuses on an electrical engineer trying to harness his theoretical physicist wife's incomplete research to build a time machine in order to return to a moment before she succumbed to early-onset Alzheimer's. Of course, his experiments have far-reaching effects and the Fringe team has to shut him down. When Peter catches him in the middle of a time bubble with his lucid wife, the husband agrees to turn it off if his wife finishes her work so he can build a stable time machine far away from civilization. The ending, in which the husband realizes his wife has instead blacked out all of her equations and left him with a note imploring him to "Just love me and live your life"? Heartbreaking. The fact that the pair is played by real-life husband and wife Stephen Root and Romy Rosemont makes it even more poignant.

The case: People are found murdered, their skin and hair bleached of all pigment; all killed by a man who has been rendered practically invisible by scientific experiments.

The season's most emotional hour was followed immediately by its most suspenseful. In "U. Gene," Fringe found one of its most memorable villains... or anti-villain, I should say, as it turned out his only motive was to absorb enough pigment so that he could finally be seen by someone. (Specifically Julie, the crush-worthy girl next door.) That's Fringe at its best: simultaneously terrifying and tear-jerking.

The case: A man scarred by a horrific skin disease murders men so he can extract their pheromones in order to seduce their widowed wives into falling in love with him.

Like "Marionette," this innocuously titled episode is one of the show's creepiest efforts. Like U. Gene, the killer played by recognizable character actor Michael Massee was committing gruesome crimes for noble intentions. In his own twisted way, he simply wanted to discover what love was so that he could share it with the world in synthesized vials of perfume. (The fact that said perfume was made from the dehydrated corpses of men he'd murdered seemed incidental to him.) The fact that this memorable case-of-the-week coincides with Olivia and Peter's long-awaited emotional reunion makes this one of Fringe's most oddly romantic hours.