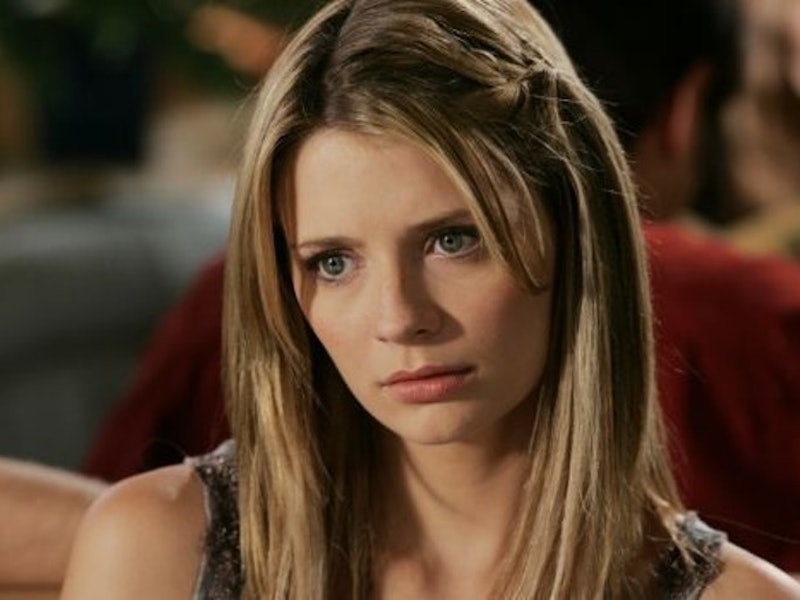 Unless the show in reference is called Grey's Anatomy or Game Of Thrones — aka, a show where characters' lives are perpetually at risk of getting snuffed out — it's a total shock when a series' writers decides to kill off one of the most major characters. It certainly was a shock when The O.C. took a main character's life, after spending three seasons building the lives and relationships of four Newport Beach teens. The series followed Seth, Summer, Ryan and Marissa as they waded through the drama of their upper-class lives and made one terrible decision after another. That said, it was still a huge surprise that the show's queen of bad decisions, Marissa, didn't actually live long enough to see the series through. Marissa died in the Season 3 finale of The O.C. in the arms of her on-again/off-again love Ryan, in a moment that shocked fans everywhere. (Well, it would have, had Mischa Barton not announced Marissa's death on Access Hollywood prior to the episode airing.) Marissa's tragic demise was one of the most iconic moments from The O.C., which should make fans wonder: What if it never happened at all?

Obviously, The O.C. — or at least, the last season of The O.C. — would have been a completely different show. That's because Marissa's death was a huge turning point for all of the characters: who would they be in Marissa never died in that car accident?

Here are just a few major things that would have went down differently.

1. Summer Wouldn't Have Found A Passion For Saving The Environment

Summer was devastated when Marissa died, but it was more than just grief she was dealing with: she also lost a piece of her identity. Being Coop's BFF was an integral part of who she was, and without Marissa, she felt distanced from the carefree California girl she once was. When she went to Brown, she channeled all of that energy into environmental causes — but had Marissa survived, it might not have worked out like that. Instead, Summer might have been content pursuing passions more akin to the high school version of Summer, like fashion.

2. Ryan Would Have Gone To College Sooner

Ryan eventually did go to UC Berkeley, and he achieved his dream of becoming an architect. However, after Marissa died, Ryan traded in his dorm room for a storage closet in a bar, determined to self-destruct. Had Marissa lived, Ryan likely would have gone to Berkeley immediately after graduating from Newport — and perhaps Marissa would have joined him.

3. Taylor Would Have Stayed On The Fringe

Taylor was a fairly minor side character in the earlier seasons of The O.C. — but when Marissa died, Taylor took over as both Ryan's love interest and Summer's BFF. Had Marissa stuck around Newport, it's likely that Taylor would have gone to Paris and popped up only on occasion.

4. Marissa, Not Taylor, Would Have Been Summer's Maid Of Honor

Well, this one is just obvious. Maaaaybe Taylor could have wiggled her way into a bridesmaid role?

5. Marissa May Have Walked Down The Aisle Herself

Marissa's letter to Ryan, which Julie found after Marissa's death, hinted that there could be a possible future for them when both were older and wiser. Unfortunately, Marissa didn't get to find that out — but had she lived, it's likely that she and Ryan would have ultimately been endgame. Would a joint wedding with Seth and Summer be a little too weird? Err, maybe, but I can still dream.

6. We Would Never Have To See Ryan Look So Sad

Rewatching Season 4 of The O.C. is tough for Ryan fans, if only because Ryan was at his lowest point ever. Had Marissa lived, Ryan would have dealt with his fair share of drama, but the deep depression he sank into would have been avoided completely.

7. Volchok Would Have Been Way Less Of A Thing

Just because I could stare at Cam Gigandet forever doesn't mean that I wanted yet another destructive male who was obsessed with Marissa to be an integral part of the plot. Had Volchok not ultimately been the instrument of Marissa's death, the show might have cooled it on his plot points... something I, personally, would have been eternally grateful for.

Alas, all we have left is to imagine what The O.C. would have been with a little more Marissa. At least she'll live on in reruns.