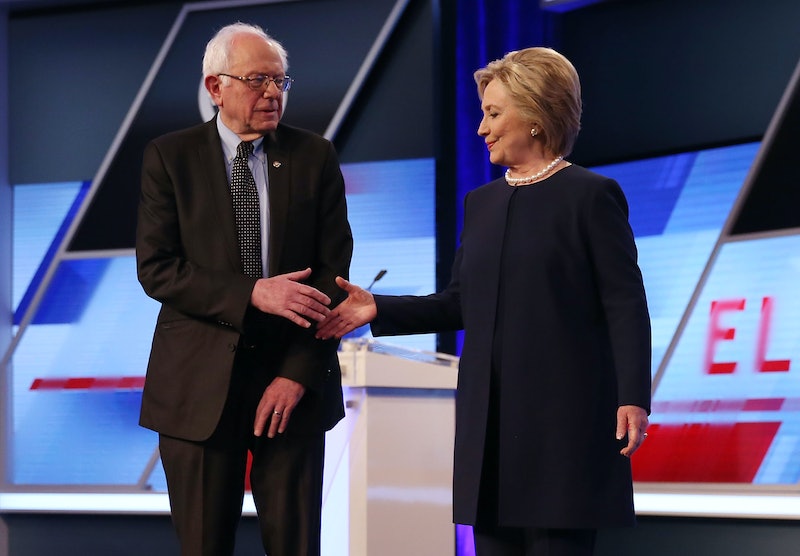 Wednesday night, Hillary Clinton and Bernie Sanders went head to head on the debate stage for the eighth time in Miami (although it feels like the 100th time). The Sunshine State will hold its primary election for the Democratic candidates March 15, and Wednesday night was their chance to win over voters in the state. After Sanders pulled off a surprise victory in Michigan the day before, tensions were high and Clinton needed to re-establish her confident lead over the Vermont senator. The winner of the eighth Democratic debate was a tough call, but ultimately Clinton had a stronger performance on key issues like immigration.

In the latest CNN/ORC poll, Clinton has a strong lead over Sanders in Florida, with 61 percent of the state's support compared to his 34 percent. Florida has 246 Democratic delegates up for grabs next week, which will be divided proportionally based on the election results, like all 2016 Democratic primaries and caucuses. Sanders currently trails behind the former secretary of state by 214 delegates, not including superdelegates who have already pledged their support for either candidate (but mostly Clinton). The presidential hopefuls need a total of 2,383 delegates to win the party's nomination, and a large victory in Florida could give one of them a major boost closer to that magic number.

Further solidifying her lead in the Sunshine State, Clinton scraped by with a slight victory in Wednesday night's debate. Neither candidate had an obvious advantage or a completely floundering performance, but Clinton outshone Sanders in a few important moments.

One such moment was when a Guatemalan immigrant and mother of five addressed the candidates in Spanish, asking what they would do to stop deportations and reunite families, as her husband was deported three years ago. Sanders' answer was less substantial than Clinton's, saying not much more than, "I will do everything that I can to unite your family." Clinton went into a little more detail than her opponent, explaining that she'll defend current immigration policies and pass more. "And I will do everything I can to pass laws that would bring families back together," Clinton said. "And I hope that your children are all either citizens born in this country or eligible for the programs that President Obama has put into place, DACA and DAPA, because I will defend those and I will absolutely protect your children, yourself, and try to bring your family back together."

Clinton performed well when it came to all immigration and race questions. When asked whether or not Donald Trump is racist, neither Clinton nor Sanders wanted to directly call him that, but pointed out some of his more racist statements. However, Clinton brought up that she was one of the first candidates to call him out for it, saying: "When he was engaging in rhetoric that I found deeply offensive. I said, 'Basta.'" While some feel that she's been pandering for the Latino vote ("hispandering" as the moderators put it), her answers were strong on Wednesday, and her use of Spanish words like "basta" could also been seen as embracing Hispanic Americans.

The former secretary of state exuded power when she didn't allow Sanders to cut her answers short. The Vermont senator attempted to interrupt her, and she forcefully said, "Excuse me," until he quieted down and she could complete her thought. Sanders had done the same thing to her in the last Democratic debate, so you could call it payback.

Nevertheless, the fact that there wasn't an outstanding winner mimics the actual race for the Democratic nomination. Clinton and Sanders have kept up a pretty close competition despite Clinton maintaining an overall lead. Sanders' surprise victory in Michigan's primary Tuesday reaffirmed that it's still a two-person race and no one is definitively the nominee yet, which the debate further proved.