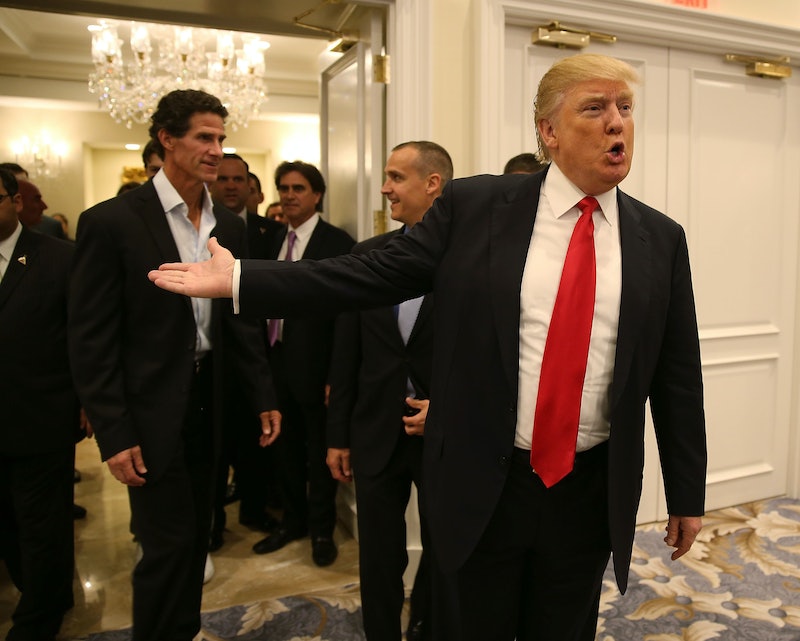 At this point in the presidential race, Republican frontrunner Donald Trump isn't too keen on the idea of a brokered convention. In an interview with CNN's Anderson Cooper that aired Wednesday night, Trump talked about the convention, which will take place in July, brokered or not. His thoughts aren't particularly surprising, considering Trump currently leads the rest of the Republicans by nearly 100 delegates.

In the interview, Cooper asked Trump about his trade plan, his vision for the Republican party, and the upcoming convention, among other things. True to his style, Trump reiterated his confidence in his campaign, predicting that he'd garner more than the 1,237 delegates needed to win the party's nomination. In doing so, though, Trump also managed to throw some shade the GOP establishment's way.

If you go to the convention ... and you're leading by a lot of delegates, I think you should get the nomination.

In other words, Trump does not want to see his large lead crushed by a brokered convention. But he also doesn't really understand why he's working toward that 1,237-delegate threshold either, calling it an "artificial number."

Whether or not I get to that artificial number, I don't know. But I think I will.

There's been talk of a brokered convention since even before this year's primaries and caucuses began. Typically, nominating conventions are little more than ceremonious events for each political party to rally behind its presidential nominee. That could change this summer, though, if no Republican candidate claims 1,237 delegates — or if the higher-ups of the Republican Party decide not to support Trump's bid for president.

It's hard to tell just what a brokered convention would look like in 2016, in part because one hasn't occurred in decades. It would likely involve a lot of behind-the-scenes negotiating and scheming, though, and it could result in a nominee who does not have the support of the majority of Republican primary voters. That's a result that Trump seems set on avoiding.

At several points during Wednesday night's interview, Trump expressed confidence in the race. He called himself the frontrunner and said that if he wins both Ohio and Florida, two of the next states to head to the polls, then his opponents' chances are pretty much over. That might not be the case, though. In order to accumulate 1,237 delegates, Trump still has to win more than 50 percent of the remaining delegates up for grabs. As he knows, it's not really over until the convention — and he's clearly hoping that no surprises take place there.