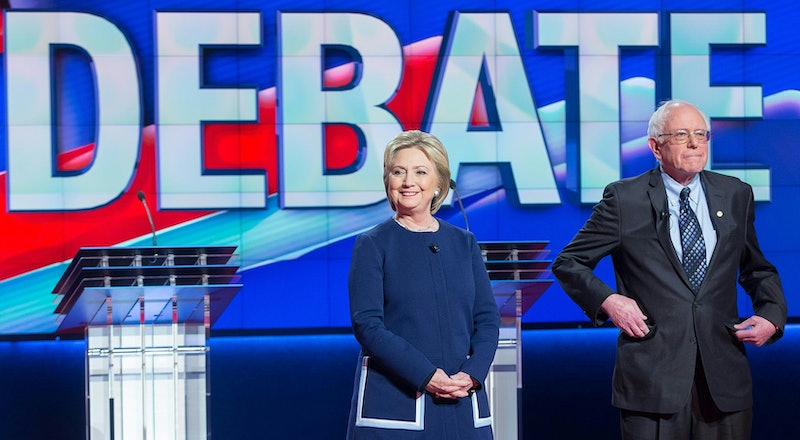 What may have felt like the millionth debate of the election season took place on Wednesday night. Two Democratic candidates remain, both of whom took the stage at Miami Dade College shortly following their previous debate on Sunday. In between both events, frontrunner Hillary Clinton suffered a shocking loss in the state of Michigan. Bernie Sanders won by less than two percent. The race to nab the presidential nomination has been tight between the two yet viewers are beginning to get debate fatigue. The funny Democratic debate memes and jokes emerging during this latest event highlight that exhaustion while poking fun at the very political process we all can't seem to look away from.

Viewers were treated to a surprisingly engaging event, which was put on by Univision and The Washington Post. Moderators Jorge Ramos and Karen Tumulty heavily touched upon issues of immigration in ways that hadn't previously been brought up in past debates. Having such an event in which an overarching issue takes precedent felt refreshing to voters, who are seeking more information on candidates' platforms as well as what sets Clinton and Sanders apart. For all its seriousness, the debate still managed to offer plenty of opportunities to poke fun at what was unfolding in Miami. Sanders' side eye returned, as did his finger waving. Needless to say, the Internet was armed and ready.

The debate included many emotional moments, which made it a little more difficult for the more sardonic viewers to get their snark on. Props were key in keeping a steady stream of memes and jokes this Democratic debate it seems. The previous joke of the Dem Debate going back to the 90s was even touched upon on social media, as candidates brought up their policies from the decade. What unfolded in real time was just as bizarre. The color of Bernie Sanders' suit came under fire, as did the rather odd debate response from former GOP presidential hopeful Rand Paul. The Kentucky senator decided to play DJ rather than provide any nuanced debate commentary.

A wild Democratic debate afterparty would certainly be par for the course in Miami, a city known for its incredible offering of live music and EDM clubs. Imagine Sanders and Clinton getting down to some Avicii as they party their way towards the Florida primary. As yet another debate ends, it's up to social media to carry the torch of my wild meme dreams and make some killer Sanders and Clinton EDM gifs for the world to enjoy until the next debate.