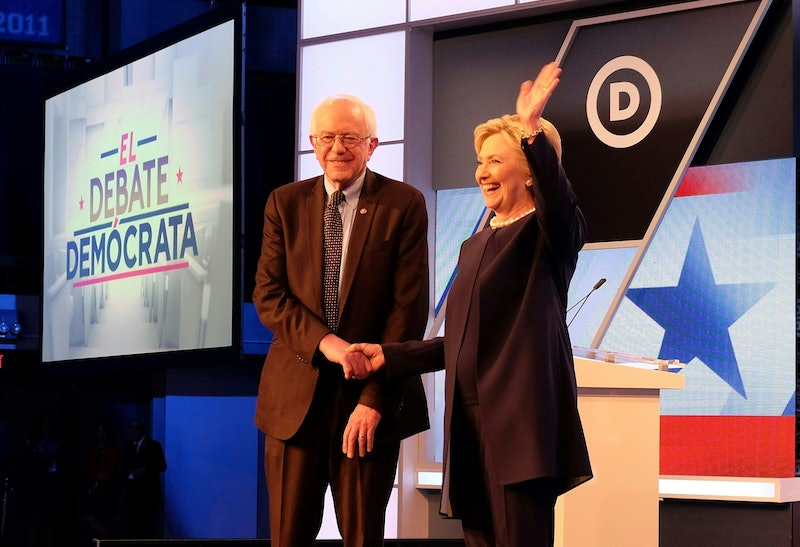 Wednesday's Democratic debate stands as the only major political event to highlight the pitfalls of ineffective immigration policies. Moderators Jorge Ramos and Maria Salinas asked candidates the hard questions about their stance on finding more effective paths to citizenship. Over the course of the debate, an audience member had the opportunity to address both candidates. Lucia Quiej's Democratic debate question is powerful, pointing to the tragic human toll rampant deportation has taken. Quiej sadly hasn't seen her husband, Andres Jimenez, in years. He was pulled over in 2011 for driving with an expired license, which set about a series of events that ultimately culminated in his deportation back to Guatemala. Jimenez was denied political asylum and thus had few opportunities to legally look towards becoming an American citizen.

Quiej is the mother of five children, all of whom attended the debate. She has thus been made the primary breadwinner for a household already mired in the stresses of making their way in a foreign country. She lives in nearby Homestead, Florida, just 21 miles out from where the debate had taken place. In a 2014 interview with Progreso Weekly, Quiej had this to say about the circumstances surrounding her husband's deportation:

I was one month pregnant and they deported him only because he didn’t have a driver’s license. There’s a lot of people here with ankle monitors, many children whose parents were taken away by Immigration. In Homestead, there’s nothing; only despair.

She bravely addressed both candidates in asking what they would do to reunite families and finally lift the despair plaguing so many families across the country.

Viewers have applauded Quiej for her courage as well as partner network CNN for broadcasting such a visceral moment, thrusting the issue of immigration firmly into the public conscience. The woman spoke in Spanish and her questions were translated by Univision journalist Enrique Acevedo to the candidates. Clinton took the time to praise Quiej for appearing at the debate and addressing the two Democratic presidential hopefuls in the face of a subject that has caused the mother of five considerable grief.

The deeply personal question marked perhaps the most emotional moment of the debate. Sanders had this to say when addressed by Quiej:

The essence of what we are trying to do is to unite families, not to divide families. The idea that a mother is living here and her children are on the other side of the border is wrong and immoral... That is beyond comprehension and policies that should not be allowed to exist. So, ma'am, I will do everything that I can to unite your family.

In an interview prior to the debate, Quiej's daughter, Elena, spoke of how much she missed her father. The 16-year-old hopes to see him before her high school graduation. Both vowed to do everything in their power to unite Quiej's husband with her family in the United States and make that moment a reality.