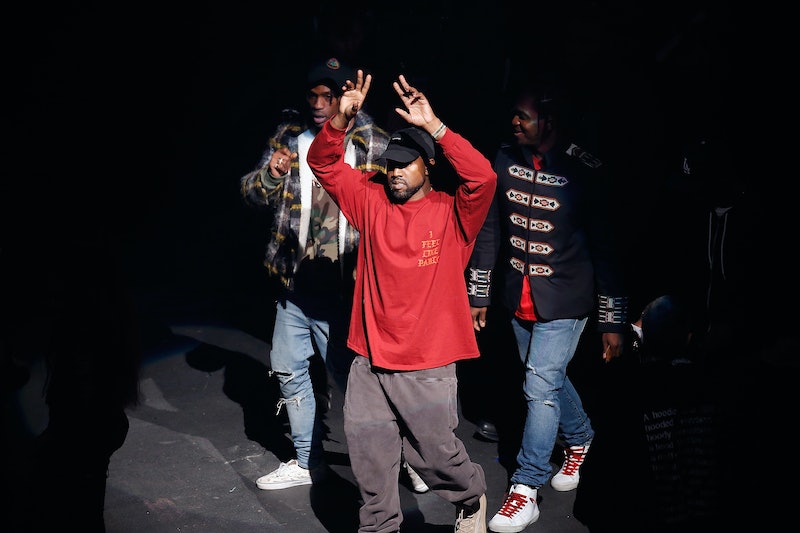 He's baaaack! Well, it's not like he ever really left. But Kanye West ranted about fakeness in fashion on Twitter. He also waxed about yoga pants, his own ripped "homeless" sweaters, and his friendship with Olivier Rousteing of Balmain, who co-designed the kustom Kardashian outfits at the Yeezy Season 3 NYFW show last month, in a series of rapid-fire tweets. The torrent of tweets certainly transported me to his antics before the Season 3 showing, when he was firing off messages and images from fittings in non-linear fashion. With things relatively quiet in regards to Yeezy Season 3 for a hot second, West sparked a new conversation in and with the Twitterverse. But his rant while defending his sweaters and dragging suit jackets did offer some insight into his brain and what we can never expect to see on future Yeezy runways.

Based on the tweet content, he could have been responding to negative commentary about Season 3, but of course we can't be certain.

Also, his wife Kim Kardashian West is currently receiving both flack and support for a series of body positive social media nudes she posted. Could the rapper and designer be looking to deflect interest and take the heat off KKW? Or is he doing so because he wants all eyes on him instead? Either scenario is possible.

That's the theoretical why. Now how about the "what?" That's much less about theory and is actually insightful.

He is not about the "what's old is new" concept.

This is his crew.

He switched gears a bit to talk about fashion critics and that suggests he read a negative review and it set him off. He did design a torn and tattered sweater that his wife wore at NYFW.

He is fed up with fakeness in fashion.

A no go with faux.

He is speaking his mind.

This was his last transmission in the series.

After a whole lot of hype and near-constant conversations about the athleisure looks of Yeezey Season 3, discussion paused a bit. The Season 3 conversation has gone a bit quiet while we wait for it to become available. Was West carefully and calculatedly reigniting the conversation about Season 3 by being inflammatory in the digital space? Could be.

Also, he is infinitely protective of the ripped, ribbed sweaters he designed, and he should be. That's his aesthetic, his design, and his vibe. He believes in what he created so much that he put it on his wife to wear on a grand stage. If he doesn't back a design, despite criticism, then it will fade from view. He has to believe in his creations and that he does. You cannot and should not fault him for that. He is not acquiescing to critics.

Now, about the suit jacket stuff.

Maybe he just doesn't dig suit jackets because he doesn't view them as a fresh take on fashion? He seems to think fashion needs to be game changing and groundbreaking. Yes, trends are cyclical and what is old is often new, but he is clearly not feeling suit jackets paired with yoga pants — or anything else!

So, yeah, don't expect to see any suit jackets on future Yeezy runways.