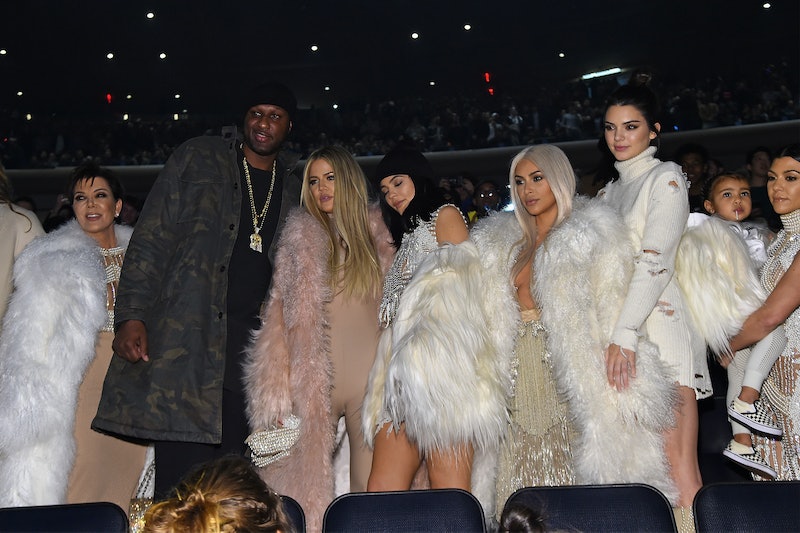 Two heads, hands, and designer perspectives are better than one. Kim Kardashian's Yeezy outfit, worn at her husband's Season 3 NYFW show, was quite the attention-getter. The decorated, white ensemble boasted a tattered, ribbed top, a fringed bottom, and fluffy fur. West revealed this "wifey look" during his fast and furious barrage of fitting tweets leading up to the show. But the rapper and designer had some assistance with creating the Kardashian family klothes and it came from an unsurprising source. Who co-designed Kardashian's outfit, which was also special since it marked her return to public view after spending the past several months nesting with newborn son Saint?

It was actually Olivier Rousteing from her beloved Balmain brand. Rousteing and Yeezy co-designed all of the family's outfits for the NYFW event. Kardashian posted a photo of their coordinated looks on Instagram, revealing that the pieces were "Yeezy x Balmain." Of course these were custom pieces. It's pretty exciting that West and Rousteing collaborated. Perhaps a capsule collection is coming down the pike. This is just a sampling of what these two minds can do.

Kardashian also noted that her husband flew to Paris in a mad dash a week prior to the NYFW show and that Rousteing made the pieces happen in just five days. Wow. That's some fashion quickness right there.

Here are the matching Kardashians and Jenners or "Kardashianners" in Yeezy x Balmain. These outfits may very well be one-offs designed expressly for the event, with no plans to reproduce them commercially or for purchase as part of Yeezy Season 3.

These items were also a more designed and, well, fluffier contrast to the militaristic looks presented in the show. There appeared to be more color in Yeezy Season 3, so West didn't completely distance himself from Seasons 1 & 2 styles. He did switch stylistic lanes, though, with Kim and ko.'s outfits, so change is definitely afoot overall for West as a designer.

You know, it's pretty cool to see that West was able to work in tandem with a luminary like Olivier Rousteing and combine their visions. Notice his wife labeled the pieces "Balmain for Yeezy," which indicates Rousteing guesting for West even though Balmain has a much longer, stronger history as an upscale brand. Even so, West is growing as a designer in so many ways.