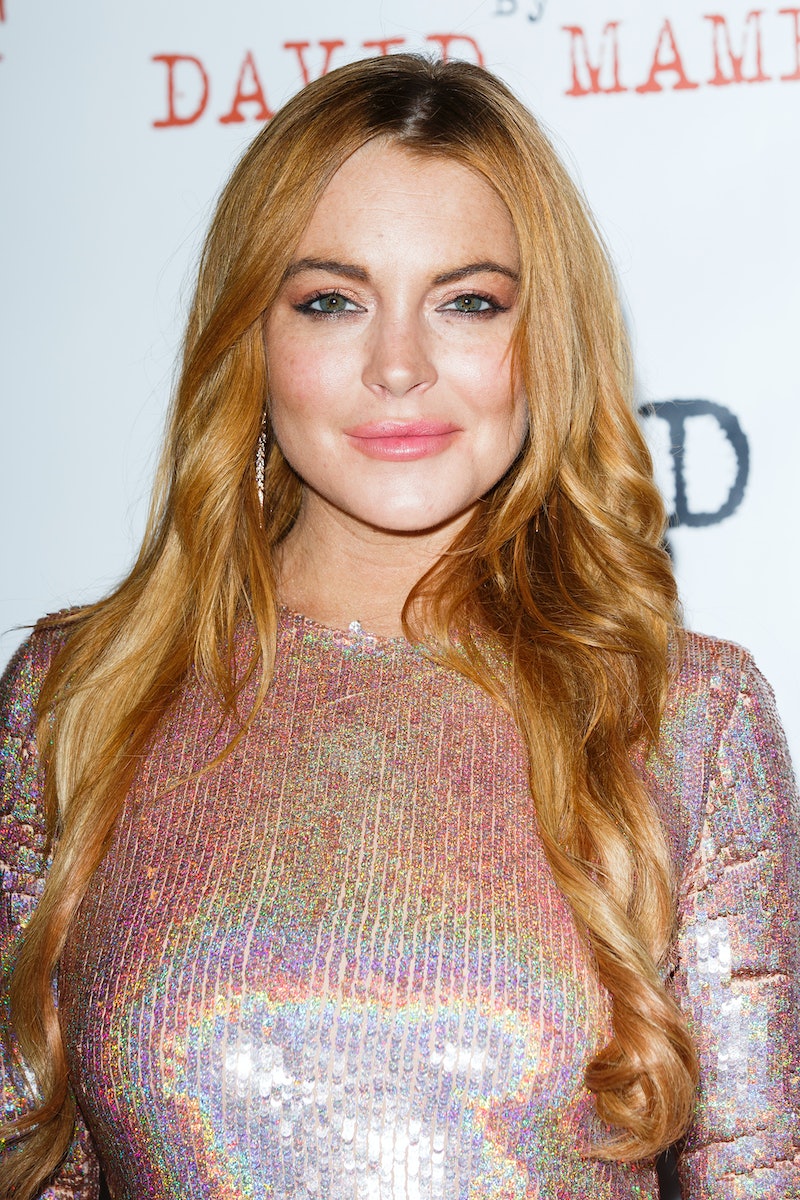 Picture this. A former childhood star and a One Direction singer could've been your favorite celebrity couple to ship — or one that you just couldn't wrap your head around. While chatting with The Sun, Lindsay Lohan said she once turned down Harry Styles. No word on when this exactly took place, but it's as dumbfounding as it sounds.

Per the 29-year-old actor, Styles once showed up outside of her hotel room late one night (around 2 a.m.), according to The Sun, because his two friends told him Lohan was having an after-party. Anyways, upon opening her door, as Lohan described to the publication, "He was in a suit. I said, 'Well, you’re very good-looking — can I help you?' That was it."

She continued her story and said, "He was like, 'I’m Harry. Gavin and Michael sent me here.' I was in bed. I was like, 'I’m going to bed but it was nice to meet you.'" She added, "It was 2 a.m., I had just come back from an AA meeting. I looked like sh*t too. I was wearing a big hotel robe, I had a slip under it. It was not a good look. I was watching some really cheesy movie too. You could totally hear it in the background."

Eventually, it did dawn on her that the man who she said randomly showed up at her door was heartthrob Harry Styles. "It didn’t click who he was at the time," she confessed. "I told my sister the next day and she was like, 'Wait, are you kidding me? Do you understand? Do you have his number? Can I have it?'" Now that is how someone should react upon seeing him, but, hey, maybe not everyone is in love with Styles' hair like a good part of the population.

Really, how the heck did Lohan not know who the 1D singer was? How do you not know Harry Styles? I guess not everyone is a One Direction fan, plus it was late at night, so she could've just been tired. Whatever the case, being in the spotlight and in the world of Hollywood, one would think LiLo would've recognized one of the most famous boy band singers ever.

Lohan said she actually saw Styles in Los Angeles "recently," and said that "it's probably awkward on both our parts now."

Anyone else dying to hear Styles' side of this story?

More like this
20 Celebrity Couples Who You Forgot Dated In 2002
By Jake Viswanath
Is Megan Fox Pregnant? MGK Gave A Shout-Out To Their “Unborn Child” Onstage
By Hugh McIntyre
Harry Styles Opened Up About Olivia Wilde With A Rare Comment About "Trust"
By Sophie McEvoy
Britney Spears Set A Wedding Date With Fiancé Sam Asghari & Previewed Her Dress
By Bustle Editors
Get Even More From Bustle — Sign Up For The Newsletter