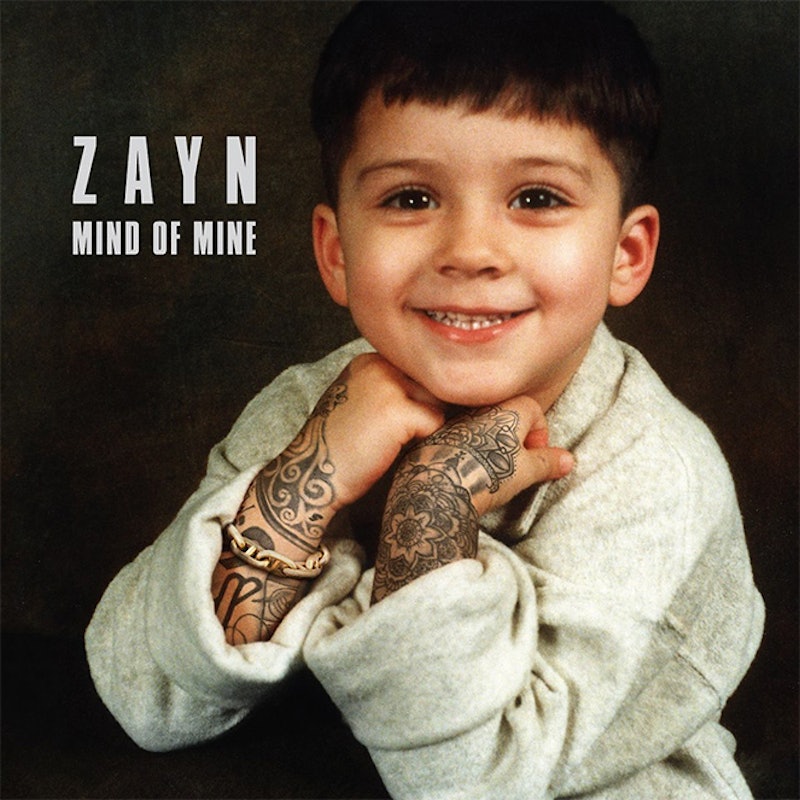 I need to get real for a second. I'm super excited about Zayn's new album, Mind Of Mine. And, believe me, if you told me I would be excited for Zayn Malik's solo career a few years back, I would have looked at you like you were crazy. But with super catchy singles like "Pillowtalk," "It's You," and "Like I Would," there's no denying that this dude has got talent. However, there's also one thing that is seriously throwing me off when it comes to my feelings about the new album: the Mind of Mine album cover art. And no, I'm not referring to the fact that his photo choice is pretty similar to Lil' Wayne's 2008 album, Tha Carter III. With the cover showing a picture of a young, toddler-aged Zayn with older-Zayn representative arm tattoos, it just doesn't totally match the vibe I'm getting so far from the album. Basically, Mind of Mine having a baby photo on its cover is off-putting in relation to the album's seemingly sexual theme.

Based on the songs (and music videos) released from the debut album up until this point, the central theme of the album is one thing: sex. Zayn is determined to not only share a little too much about his love life, but he's also proving his maturity... in the bedroom. With "Pillowtalk" being the most blatant example (the lyrics literally say, "Be in the bed all day, bed all day, bed all day. F***ing in, fighting on."), "It's You" also strongly relates to his love life, and the chorus of "Like I Would" says things like, "He won't touch you like I do. He won't love you like I would." And I'm pretty sure that none of those themes would be well-equated with a baby photo, no?

If you don't feel uncomfortable just yet, allow me to put things into a different perspective: What type of music would allow this album cover to be acceptable? Well, for one, if the rest of the track list for Mind Of Mine remained heavily focused on Zayn's childhood and his journey growing up, the cover art would certainly fit right in. However, with Zayn's overall edgy vibe, his rollercoaster of a love life, and the need to breakout from the One Direction stigma, I highly doubt the released track list gives us much hope of songs that aren't directly related to the kind of mature relationships you can't imagine this actual toddler on the album cover having.

I'm just going to have to ignore the photo I'm looking at when the album is playing on loop (as it probably will be). And, so far, it seems as if I'm not the only one who is going to have to turn my eyes from how adorable Zayn was as a wee lad...

But, really, though, prepare for some awkward moments of jamming out to a super sultry song — and then having a glimpse of baby Zayn ruin the mood.

More like this
Harry Styles Addresses The Theory That His New Song "Daylight" Is About Taylor Swift
By Jake Viswanath
'Harry’s House' Is Inspired By A Japanese ‘70s Pop Icon & TikTok Fave
By El Hunt
9 Of The Thirstiest Lyrics From Harry Styles' New Album
By El Hunt
Becky G Once Had A Fear Of Speaking Spanish. Now She's Topping The Latin Charts.
By Tess Garcia
Get Even More From Bustle — Sign Up For The Newsletter