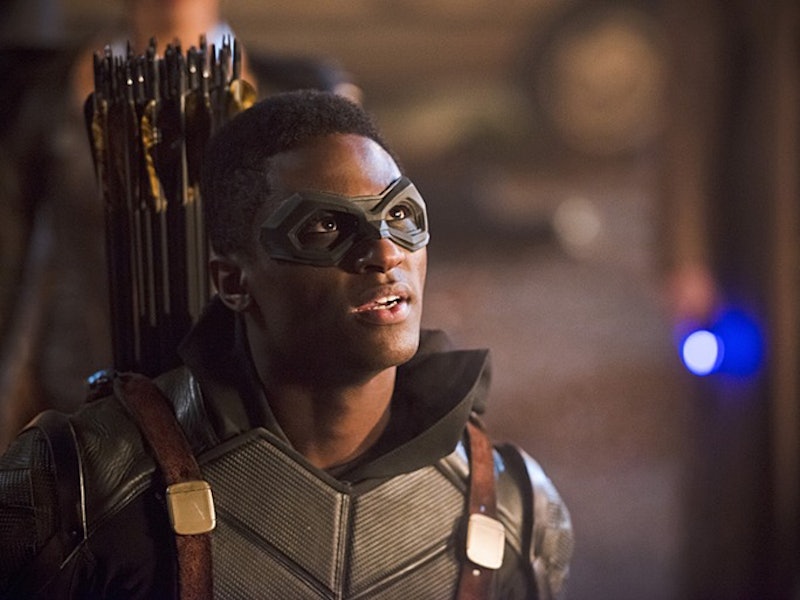 When you're dealing with a time-traveling series like Legends of Tomorrow, you're bound to come across some pretty interesting discoveries, but I don't think anyone was prepared for what these Legends found during their trip to Star City 2046. Not only did we get a glimpse of an elderly version of Oliver Queen, but we also were introduced to Diggle's son, Connor Hawke, who took up the Green Arrow mantle when Oliver called it quits. And even though the Legends have since moved on from that timeline, I wouldn't rule out the possibility of seeing Diggle Jr. again at some point in the future (or maybe even in the past). Bustle recently spoke with the actor himself, Joseph David-Jones, about Connor Hawke's possible return to Legends of Tomorrow and what the existence of his character means for Diggle's future.

"We're in talks with the writers, but nothing's been solidified or concrete," David-Jones says about his potential Legends return. "So we'll just have to wait and see." But, of course, Legends isn't the only CW series the actor's character could venture to. In fact, considering how all of the network's superhero shows appear to be from the same universe (hence all the amazing crossover episodes), there's a chance Connor Hawke could also eventually pop up on The Flash, Supergirl, and, obviously, Arrow, in order to see dear old dad. So is that a possibility that David-Jones is open to? "Oh yeah, definitely," he tells us. "I mean, on Arrow my father is still alive."

Speaking of which, let's discuss what we learned about Diggle during this little jaunt to the future. We know that he died (*weeps uncontrollably into pillow*), however, it happened quite a while after Connor was born since it was clear in the episode that he was both close to and admired his father very much. Knowing this, many fans could make the reasonable assumption that Diggle won't be the one to end up in that future Arrow grave, given that Connor hasn't even been born yet. However, David-Jones warns viewers not to be too fast in making that assumption and remember what Rip Hunter said about that particular moment in time not being a fixed point.

"That's the thing, I don't know," David-Jones explains. "I don't want to say this completely takes all of the risks and all of the stakes out, particularly for Diggle. Because this could all be a different timeline." Time is constantly in a state of flux on this show, which is why Rip told Sara not to worry too much about Star City's fate because if they're successful in their mission to kill Vandal Savage, then the odds are this horrific future will never come to pass. But that also means that Diggle's death is just as likely to change and perhaps be moved up to an earlier period in time.

It's a devastating thought to consider, especially since I was hopeful we were finally able to factor Diggle out of the grave equation. But thanks to the murkiness of time travel, we seem to be back at square one. Anything can happen. However, in the meantime, David-Jones suggests we "just keep your fingers crossed that it's not him." And hey, if it really does turn out to be Diggle in that grave, maybe Connor Hawke could go back in time and rectify the situation. (Please?) After all, anything's possible when you've got the option of time-travel on your side.