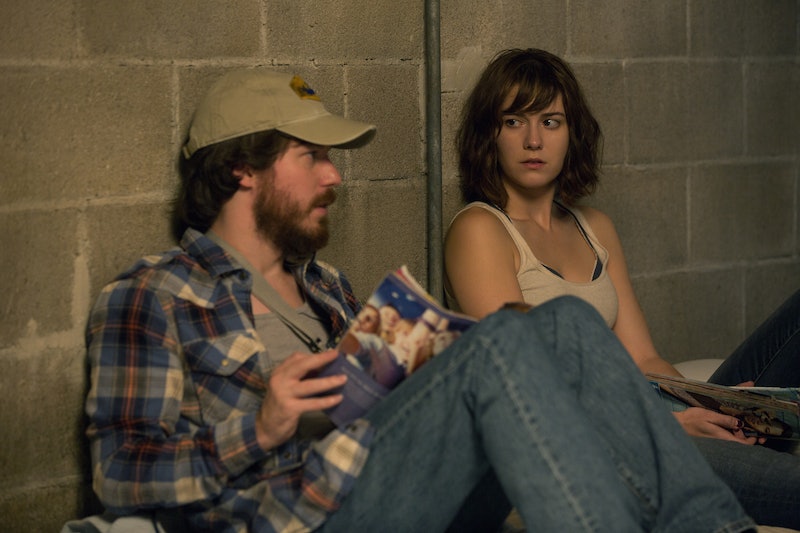 If you're a lover of the monster movie genre, then 10 Cloverfield Lane is pretty much all that exists in your life right now. The new movie from producer J.J. Abrams has a lot to live up to. After all, it's title connects it to the 2008 smash hit, Cloverfield, which set the bar for surprise releases and monster films. The found-footage extravaganza has only gained fans in the past eight years, in part because of the many questions the film left unanswered. What exactly is the Cloverfield monster, and what does it want? Did any of the main characters survive? What is happening to the world outside New York City? Those questions tortured fans for years, and now, instead of answering those questions, 10 Cloverfield Lane has just presented a whole new set. Like Cloverfield before it, the new movie ends on a bit of a cliffhanger (and that's putting it mildly). But what does the ending of 10 Cloverfield Lane mean?

Before we get into what the conclusion of the new movie could signify, we should probably describe it. So, if you haven't seen 10 Cloverfield Lane, then I'd stop reading now, unless you want major spoilers. At the end of the film, Michelle (Mary Elizabeth Winstead) escapes the bunker where she was being held by her captor, Howard (John Goodman), only to find that the planet has been invaded by some kind of alien force that has killed a large portion of the population, and perhaps infected more. She is able to defeat two aliens before getting into a car and driving away to look for safety. While driving, she hears a broadcast over the radio that survivors have taken refuge in Houston, where they are looking for more abled bodies willing to help in the fight against the invasion. The movie ends with Michelle turning her car around and heading to Houston. As for what this means, here are a few suggestions.

By ending the movie with Michelle very much alive, filmmakers have left the door wide open for a sequel to 10 Cloverfield Lane. This time, a third Cloverfield film could be a more traditional follow up, picking up with our protagonist and seeing the rest of her journey.

Michelle not only survives her encounter with the monster, she ends up driving to Houston, where survivors are looking for volunteers to fight. So, if there is a sequel to 10 Cloverfield Lane, maybe we'll get to see Michelle continue to fight and become a badass warrior.

The ending of 10 Cloverfield Lane implies that the entire country, if not planet, has been decimated by these alien monsters. Even though the monsters aren't identical to the ones in Cloverfield, could the two movies take place at the same time? Multiple species exist here on Earth, so it makes sense that an alien invasion could include different species of monsters.

In Cloverfield, the monster itself was a mystery conspiracy. Was it an alien? Was it, somehow, man made or provoked? What was it's end game? In 10 Cloverfield Lane, however, the final monster appears as just one of many. The (supposed) space ships in the sky at the end of the film suggest that this is a strategic and planned invasion — an attack.

Odds are we'll never get to find out what exactly the ending of 10 Cloverfield Lane means, but that only leaves more room for theories.