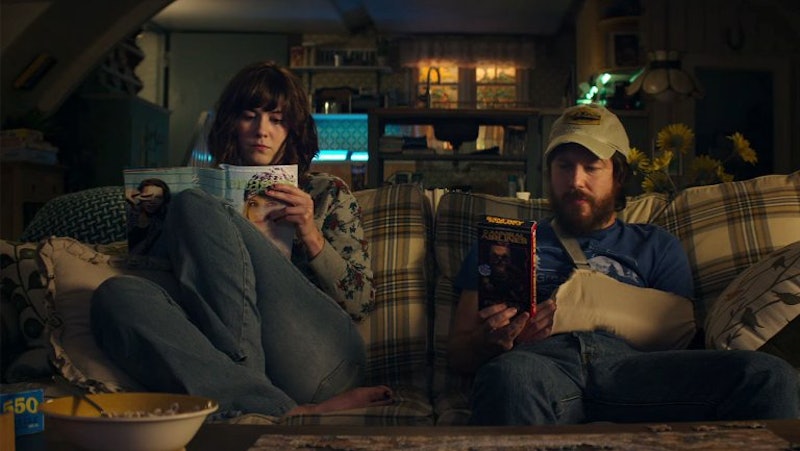 In January, fans were shocked to find out that a sequel to the 2007 horror movie Cloverfield was happening. But what was most surprising wasn't that the cult classic movie would get a sequel, but that said sequel was already made, and would be premiering a mere two months after it was first announced. Well, the premiere of 10 Cloverfield Lane is almost here, and so far the movie looks far different from its predecessor. So just how close is the plot of 10 Cloverfield Lane compared to Cloverfield ?

The two films share a tenuous connection at best. Cloverfield was as large scale as a horror movie can get. It was about the destruction of New York City by a giant, rampaging monster. 10 Cloverfield Lane is decidedly small scale, taking place almost entirely in an underground bunker with just three characters. Cloverfield was filmed found footage style on a handheld camera; 10 Cloverfield Lane is filmed like a traditional Hollywood movie. No characters from Cloverfield are set to appear in 10 Cloverfield Lane, not even the monster from the first film, and producer J.J. Abrams has stated that the new film is more of a "spiritual successor" to the first movie than a direct sequel. So while it's understood that there will be some sort of tangential connection between the films, it's probably going to be of the "blink or you'll miss it" variety.

But 10 Cloverfield Lane is not the first sequel that's barely connected to a previous series installment — far from it. A number of these "sequels" started out as completely different movies, and then were linked to an already popular film later in production. That's what happened with 10 Cloverfield Lane, which was originally a movie called The Cellar that had nothing to do with Cloverfield. So take a look at these other movie sequels that share very little in common with what came before them.

This film stars Mila Kunis as a murderous high schooler, and started out as a movie known as The Girl Who Wouldn't Die. It was then loosely connected to American Psycho by way of a flashback at the beginning where Kunis's character, as a child, kills Patrick Bateman (not played by Christian Bale) when he attacks her babysitter. The rest of the movie is unrelated to American Psycho.

This Cuban-set film began as a script called Cuba Mine, and was then turned into a "sequel" to Dirty Dancing that is really more of a remake.

Before the Fast & Furious franchise became the box office monster it is today, it was trying to stay alive with this entry, which moved the action to Japan and featured none of the original cast, save for a cameo by Vin Diesel at the end.

4. Halloween 3: Season Of The Witch

After two movies featuring Michael Myers, the decision was made to turn the Halloween franchise into an anthology series, so this supernatural witch-themed movie was released as Halloween 3. Unfortunately, it flopped, and Myers was brought back for Halloween 4 and every other film in the series thereafter.

The Wayans Brothers were not involved in this film as they had been in the previous two, and it shows. Just two actors returned from the first two movies, but more importantly, the comedic tone changed dramatically, becoming more zany and less raunchy (it was rated PG-13). After the similar Scary Movie 4, the franchise rebooted again with Scary Movie 5.

Dark Territory was going to be an action movie about terrorists on a train, but when Steven Seagal came on board, the decision was made to make it a sequel to the actor's successful Navy film, Under Siege. He plays the same character, pretty much in name only, as he's now retired from the Navy and finds himself on a train.

The fourth Bourne movie was supposed to feature Jason Bourne, but after star Matt Damon dropped out, the decision was made to carry on with a new character rather than recast. That's how Jeremy Renner's similar Aaron Cross came to be, and despite the film's title, Bourne is not in the film.

Sandra Bullock returned as the same character, but Keanu Reeves decided not to come back. Bullock finds herself on a boat that terrorists plan to crash into an oil tanker, which is a far cry from the fast-paced bus plot of Speed.

This pseudo-sequel to Knocked Up follows the family of Paul Rudd's and Leslie Mann's characters from that film. Neither Seth Rogen nor Katherine Heigl appear, and the events of that film are not referenced.

No Kevin McCallister here. Instead, a new kid named Alex Pruitt has to defend his home from four terrorists looking for a missile-cloaking computer chip. Uh, what?

The mother of unrelated sequels, this movie literally only shares a name with the movie Troll. It doesn't even pretend to be a sequel in any other way, sharing none of the same characters or plot. It's also considered to be one of the worst movies ever made, but without a doubt has one of the best scenes ever put to film (see above).

10 Cloverfield Lane definitely isn't the first sequel to share very little with its predecessor. Hollywood loves a sure thing, and if a studio can find a way to connect an original movie to something that came before it, they're going to do it.