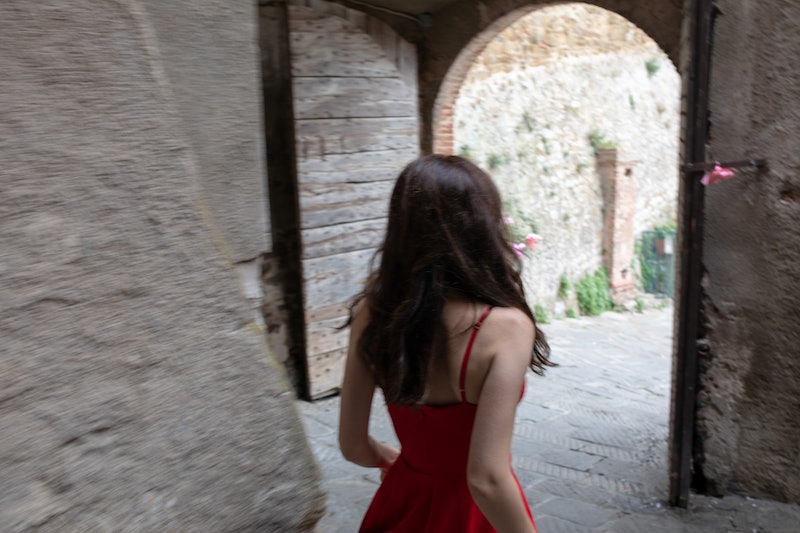 You know that feeling when you walk into a room and have no idea what you're doing in there? This phenomena is often referred to as the "doorway effect" which, in layman's terms, refers to how we compartmentalize things in our brains. It's like when you go into your bathroom positive you're finally going to scrub your tub, only to walk out a few minutes later holding your mouthwash, ready to watch Netflix for the night — then find yourself feeling frustrated in the morning because lo and behold, your tub is still dirty. Because somehow, again, you forgot why you went into the bathroom last night in the first place: To clean your tub.

Luckily, this sort of forgetfulness isn't laziness or apathy, and it's more common than you probably think. While few people actually enjoy doing chores (and if you do, you're probably the best roommate ever), studies show that when we go from one room to another and immediately forget our purpose, there's a scientific explanation beyond our dislike of dirt and grime. As Melissa Dahl at Science of Us puts it, "What happens in the kitchen, stays in the kitchen," referring to how we'll so easily walk into the kitchen intending to do the dishes or clean the oven, only to forget why we walked in to begin with, then leave the kitchen with a snack, leaving the dirty dishes and oven behind us.

What causes this strange phenomena? There's a lot of interesting research on the subject, and it primarily connects to one component of our brains: Memory. For example, a 2014 study on memory showed that when participants walked through a door, they literally experienced a divide in their memory. That's right: Crossing from one side of a door to the other (say, from your living room to your kitchen, where you are positive you are going to clean that oven) causes you to put up a literal mental block in your brain.

Why Does It Happen?

Our memories are episodic in general, so this actually makes sense from a psychology stand point. If you think back on, well, anything, you'll probably quickly realize our memories don't function as clear, linear narratives. Instead, they're more episodic and split into segments. So when we pass from one side of a door to the other, our brain signals to our memory that we're entering a new space, and our brain adjusts accordingly.

As Ira Hyman explains at Psychology Today, we tend to construct situational models based on our surroundings and when we enter a new environment (after crossing through the door), our brain erases the old model to make room for a new one. So in your living room, you're totally about to clean your kitchen, and when you're in your kitchen, you're all about grabbing a snack and getting back to the living room to watch another episode of your current Netflix obsession.

In terms of neurology and brain function, other scientists refer to this experience as the "location-updating effect." Researchers (in layman's terms) look at the impact of crossing from one room to another and how much time it takes us to remember tasks or items if we cross into another room, versus if we don't make the same transition. Interestingly, some studies show that this happens even when we cross into new rooms on a virtual level, like in a video game.

What Can We Do About It?

First of all, if you majorly relate to what's described in these studies, don't beat yourself up over it. It says nothing about your intelligence, passion, or reliability, because this seems to happen to pretty much everybody. There are plenty of tips for improving your memory and staying organized, but beyond that, I wouldn't stress about this phenomenon too much. Just don't let your dirty dishes stay in your sink for too long, no matter how many times you walk in and out of your kitchen in a day.