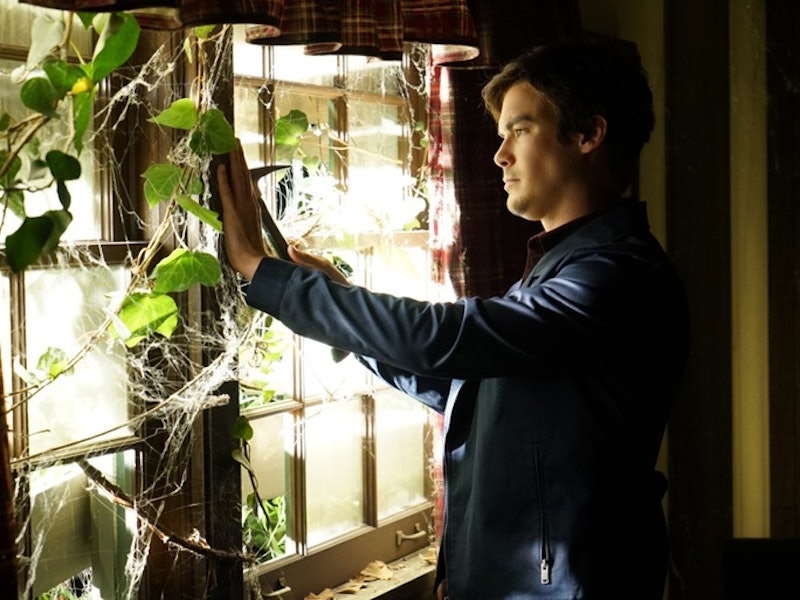 As hard as it is to believe, the Pretty Little Liars Season 6 finale is almost upon us, which means we should all start preparing ourselves for a few jaw-dropping twists. However, while a majority of the speculation is centered around the upcoming twin reveal, some fans are growing more and more worried about the repercussions that are bound to come with Hanna's false murder confession to Uber A. This person now thinks that Hanna killed Charlotte, and whether that turns out to be true or not (which I highly doubt it will), that may end up putting Caleb in serious danger. In fact, I daresay it's even possible that Caleb could die in the PLL Season 6 finale.

Believing me, just typing those words made me hate myself for even fathoming such an idea. I mean, PLL has made us endure some truly terrible things throughout the years, but killing Caleb off would be taking it one step too far... right? And yet, he could prove to be the perfect way for this new Big Bad to get revenge on Hanna for Charlotte's death. Think of it as an eye for an eye type of deal — Hanna killed Charlotte, so Uber A will kill Caleb. The hosts of Bustle's Pretty Little Liars podcast, Taking This One To The Grave, also have some thoughts on Caleb's future, the twins theory, Mrs. D's return, and more, which you can listen to below.

Anyone with eyes can see how much Hanna still cares about Caleb, and given that both she and Spencer have yet to incur this A's wrath — as that creepy faux get well soon card to Alison made plainly evident — attacking Caleb would be a way of killing two birds with one stone. After all, if these two Liars share one major thing in common, it's how deeply they love Caleb and how devastated they would be if something were to happen to him.

Look, I don't want this to be true. In fact, I've never wanted to be proven more wrong about something in my entire life. Thanks to Ravenswood, we know firsthand what life in Rosewood is like without Caleb and it's something that I'd rather not repeat in any way, shape, or form. This show wouldn't be the same without him and would create a massive uproar in the PLL-verse.

But if the past six seasons have taught us anything, it's that no one is safe from harm, regardless of their popularity. And as well intentioned as Haleb's plan is to catch Uber A, it would be foolish to think it won't come with severe consequences. Let's just hope that Caleb isn't the one who ends up paying the price.

For more PLL theories, check out previous episodes of Taking This One To The Grave below.