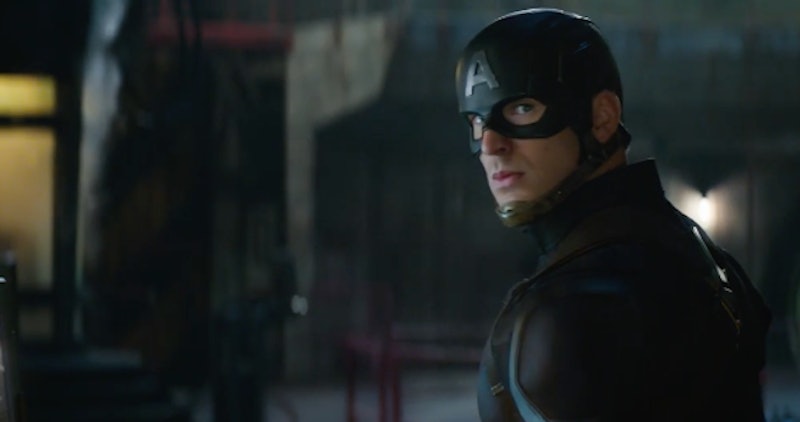 With the ceremonious thump of a shield being caught by a webslinger, the new trailer for Captain America: Civil War dropped Thursday, and it is something to behold. Not only are we seeing the usually unbreakable Avengers torn apart at the seams, but we're also witness to a new addition to the family: Tom Holland as Spider-Man makes his very first appearance. Ah yes, the Marvel universe is pulling out the big guns, sending the Internet into a fangirlish tizzy. In fact, if you scroll down Twitter's reaction to Captain America: Civil War, plenty of people are busy freaking out over the new trailer, while others... well, others are turning up the lolz.

It's not that the latest Marvel installment is particularly hilarious, it very much depicts friends becoming enemies among a world gone crazy. Buuuuut, truth be told, Spider-Man has divided the masses in an amusing way, and, well, you know how the Internet gets when it comes to Marvel and memes. I still get giggly when I see the OG Captain America Versus Iron Man Civil War meme, so there was bound to be a new crop of jokes. So, for your consideration, here is the best, most lolz-worthy Twitter reactions to the new Civil War trailer.

And then show it to everyone you know in the same calm, collected fashion.

When All You Can Do Is Cry... Hard

When The Feels Are So Intense You Need An Ambulance

And you have to ask the paramedic if they can play the trailer off their iPhone in the ride to the hospital.

Batman v. Superman is pretty lucky that it's debuting two months before this, because it would be almost embarrassing.

But Then The Moment You Find Spider-Man And Everything Changes

Have you just been hiding here the entire time?

When You Need A Moment To Recover From The Reveal

And You Can't Wait For The Big Iron Man Vs. Spider-Man Twerk Off

Because that's how this civil war is going to be settled, right?

Think of all the Oscar nods.

Except... Doesn't He Seem A Trifle Young?

Maybe in the... voice area?

That is the cadence of a toddler.

Although All Jokes Aside, A Moment Of Silence For The Spider-Men We Have Lost In This Battle

Gone, but not forgotten.

Captain America: Civil War doesn't hit theaters until May 6, but until then you can endlessly loop the trailer below... I think you're adequately prepared for it.