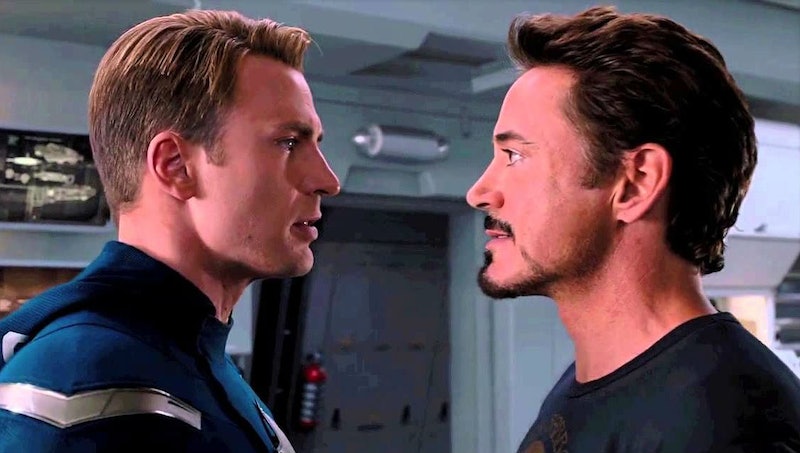 2016 is going to be all about superheroes fighting each other. Batman v Superman: Dawn of Justice, out in March, is going to kick off Warner Bros' and DC Comics' attempt to create a cinematic universe to rival the likes of Disney and Marvel, while the latter has their own battle in the works with Captain America: Civil War. That film, out this May, is set to feature Iron Man and Captain America going head to head, but they won't be alone. Here's who's on each side in Captain America: Civil War.

In case you didn't know, the movie is going to feature a cast with more heroes than any Marvel movie up to this point, and they're all joining in on the fight. This is not some kind of mano a mano skirmish like Batman v Superman; and it's way more complicated than Tony Stark having a problem with Steve Rogers. These two guys are going to drag basically the entire Marvel Cinematic Universe into their fight, and everyone's going to get caught up in the brawl. Friendships will be shattered, alliances will be broken, and some characters will probably even die. For real, this is a big deal. But what will the sides of the battle look like? Here's the rundown of the two opposing teams' lineups for Captain America: Civil War.

Obviously, Stark is leading his own team against Cap in a battle over superheroes registering with the government. Iron Man thinks heroes should be registered for accountability, while Captain America believes registration is a violation of superheroes' freedoms. This disagreement will eventually cause the heroes to come to blows, and thanks to Stark's high-tech suit of armor, he'll be pretty tough to beat.

Probably the most surprising member of Stark's team, given how closely she's worked with Rogers in the past (see: Captain America: The Winter Soldier), Black Widow appears to have chosen to be more loyal to her employer (the government) than to her friend. Her skills as a spy may come in handy in the battle to come, and she's certainly no slouch when it comes to hand-to-hand combat, either.

If there's one person you could count on for Stark's team, it has to be his BFF James Rhodes, who essentially acts as a second Iron Man on the team. As War Machine, Rhodes wears a version of Stark's Iron Man suit that is outfitted with loads more weaponry. While the suit may lack the high-tech doodads present in whatever updated version Stark is wearing these days, it makes up for it with sheer firepower.

Speaking of firepower, Vision is arguably the most powerful character on Iron Man's side, so it's a major coup that Stark was able to nab him to fight for his already stacked team. Vision is an artificially created human who sports a ton of powers, including flight, super strength, and the ability to blast solar beams from his forehead. He can also change his density at will, making himself as hard as diamond or completely intangible. In other words, he's pretty tough.

Making his debut in the film is T'Challa, King of Wakanda. Thanks to the combination of a special herb he consumes, he has enhanced physical attributes on a level that's similar to Steve Rogers, giving him super strength, speed, and agility. His country is also the most technologically-advanced on the planet, thanks in part to its abundance of vibranium. Black Panther wears a suit made out of the substance — the same material that makes up Captain America's shield — making him an ideal match for Cap.

The ultimate freedom fighter will clearly have his hands full against Iron Man's ridiculously overpowered team, as his power set is lower than nearly everyone fighting against him. What Cap lacks in powers and technology, though, he more than makes up for in heart, grit, and determination. He could do this all day.

Another low-powered individual, Hawkeye doesn't have any superhuman attributes — he's just really good with a bow and arrow. One of the most interesting dynamics will be between him and Black Widow, as the two have long been partners and are also best friends, but now find themselves on opposing sides. As she also doesn't have any superpowers, the two should be pretty evenly matched should they go toe-to-toe.

Basically Cap's War Machine equivalent in terms of being best buds, Falcon always has Cap's back no matter what. He's also the only member of Cap's team who can fly, but since he has fairly light weapons and no other powers, he'll probably have his hands full in the sky dealing with the likes of Iron Man, War Machine, and Vision.

If you watched Captain America: Winter Soldier, then you know that Bucky was Cap's best friend from the '40s who became a brainwashed supervillain. He gets his memory back in Civil War, and his renewed friendship with Cap is part of what sets Iron Man and Cap at odds. He brings enhanced physical attributes to the table, as well as a super strong metal arm and tons of experience in warfare.

The biggest weapon in Cap's arsenal, and perhaps the strongest fighter on either side, Wanda's powers don't seem to have a limit. Her abilities aren't that well defined, but she seems to at least be able to manipulate matter in whichever way she pleases. If the fight starts turning in Team Iron Man's favor — and judging from their team, it should — look for Scarlet Witch to turn the tide.

The shrinking hero joins the larger Marvel Universe probably thanks to Falcon, who was looking to make him an Avenger in Ant-Man. As his name suggests, Scott Lang has the ability to shrink to the size of an ant thanks to his Pym particles, but he may have another ace in his sleeve. In the comics, Ant-Man later becomes Giant Man, and if Scott decides to grow rather than shrink during the battle it could really help get Team Cap out of a jam.

This former S.H.I.E.L.D. agent hasn't been seen in action much yet in the MCU, but if she's anything like her great aunt Peggy, AKA Agent Carter, then Cap will be happy to have her on his side. She's highly-trained and has briefly shown herself to be a formidable fighter in The Winter Soldier, and frankly, Cap needs all the help he can get.

So that's how the teams stack up, and while Cap has the numbers, Iron Man definitely has more firepower. Of course, there are still a few questions that haven't been answered yet. Like whether or not Spider-Man is joining the fight (he's in the movie) or if the Red Hulk will make an appearance (his alter ego, Thunderbolt Ross, is also in the film). But as it stands now, the way the teams have shaped up makes it look like Captain America: Civil War will definitely feature a battle for the ages.