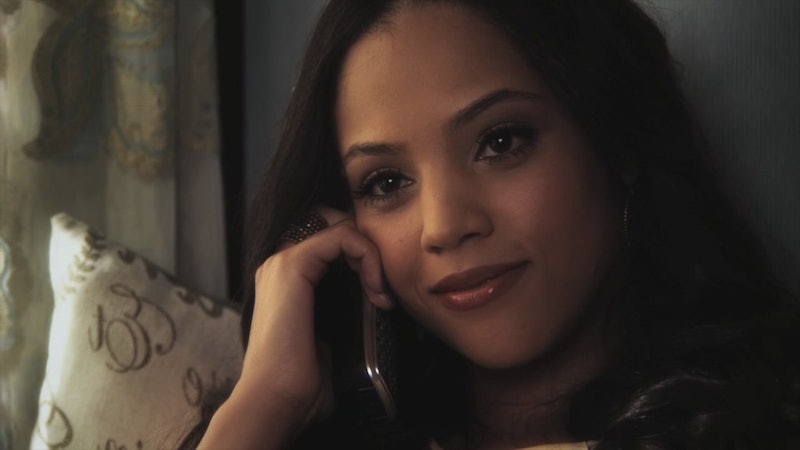 There are some characters that continue to fascinate Pretty Little Liars fans, even after their storylines are seemingly over. Despite the amount of clues that pointed to Wren being A, it seems that the British doctor is nothing more than a red herring in the story. Bethany, who held such a fascination during Season 5, might really just be the girl who killed Toby's mom and ended up in Ali's would-be grave. Of course, even if these storylines have come to their conclusion, you can't blame fans for thinking otherwise: Pretty Little Liars taught us to never stop questioning things, because there's almost always more to the story on this show. That might just be the case for one murdered PLL character, according to showrunner I. Marlene King's recent tweet. Could Maya return to Pretty Little Liars after all?

First, a refresher on what exactly happened to Maya, since she hasn't made an appearance on the series since Season 3. After running away from home midway through Season 2, it was revealed in the Season 2 finale that Maya had been killed. Naturally, that led the Liars to spend the first half of Season 3 searching for answers about her death, which they got only when Emily was nearly killed by Maya's murderer: her stalker from rehab, Lyndon, who posed as Maya's cousin Nate. PLL writer Bryan Holdman later confirmed on Twitter that Lyndon/Nate really did kill Maya because he was angry that she broke up with him — obviously, this made it seem like Maya's story was completely over.

That's why it was pretty jaw-dropping when Pretty Little Liars showrunner King tweeted this cryptic statement about Maya:

It may seem completely out of the blue for this story to come back into play, especially now that Maya's death is nearly seven years in the past on the Pretty Little Liars timeline — but maybe there's an important reason for it. We know that the Uber A storyline will wrap up with the conclusion of Season 7 — perhaps King is tying up all of her loose ends , including Maya.

If there really is a bit more to Maya's storyline, it's plausible that maybe, just maybe, Maya didn't actually die by Nate's hands. It's possible that Maya, knowing Nate was coming after her, faked her own death and went to live on the road — which could possibly leave room for a Maya/Emily reunion down the line. Then, there's the other big possibility: that Maya is the one with a twin in the Season 6B finale, which means we could see either Maya or "Maya's twin" very soon.

Still, I'm not so sure that Pretty Little Liars really will bring Maya back in the flesh — though there might be a little bit more to Maya's storyline, no one has confirmed that she is actually alive. In fact, in August of 2015, King said that Maya's death was already explained:

Still, King's tweet has to mean something. Could we get a glimpse of Maya in a flashback? Find out that her death really did have something to do with A? This tweet is just too juicy not to freak out about.