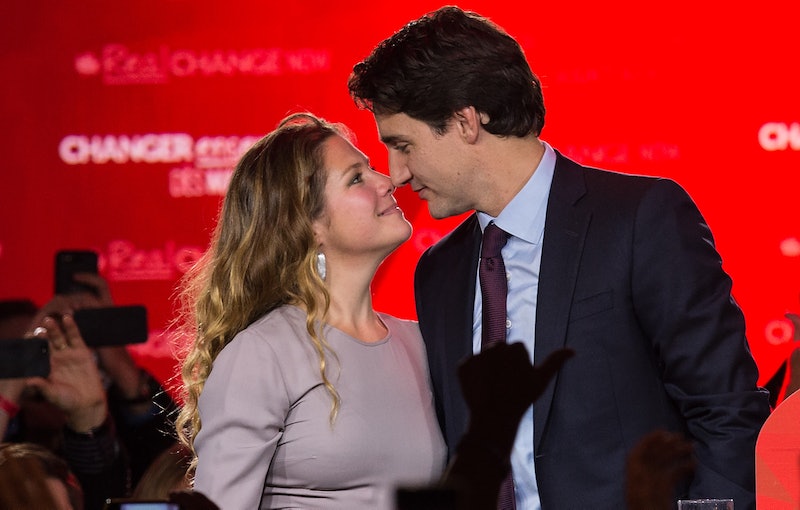 There aren't many who can compete with the near-perfect pairing that is President Barack Obama and FLOTUS Michelle Obama. There also aren't many activities that beat out daydreaming about the couple's meeting at a Chicago law firm and imagining their shared disbelief at the fact they never met while attending Harvard Law School at the same time. But with the start of Canadian Prime Minister Justin Trudeau's visit to the United States on Thursday, Americans are quickly learning that there's a new *couple goals* duo from North America in the form of Trudeau and his wife. So how did Justin Trudeau and Sophie Grégoire meet?

The first couple of Canada have actually known each other since childhood. Grégoire, during her younger years, was a friend and classmate of the late Michel Trudeau, Justin's youngest brother. Grégoire told Maclean magazine in 2005 that she remembered spending time at the Trudeau family home. “They had a really cool pool with a trapeze and ropes and we could play Tarzan for hours,” Grégoire said.

Grégoire then re-met Justin when they co-hosted a fundraising event for the Starlight Children's Foundation in 2003. According to Grégoire, the two hit it off, but she never received a response to the email she sent Trudeau following the event.

Trudeau told the magazine that he received the email, but decided he was "better off not starting anything that [he wasn't] willing to go through with." That's when Grégoire made a decision of her own — that Trudeau was a man of "no class." Fast forward a few months and Grégoire was still thinking of that email when the two happened to pass each other on the street. Trudeau asked if he could take Grégoire on a date and take down her number, but Grégoire told the now prime minister that "if he'd saved her email, he'd have no problem getting in touch with her," Maclean reported.

After the encounter, Trudeau got around to sending an email of his own, and Grégoire agreed to go out. Trudeau said that it was on that same night of their first date that he announced to her that they would "be spending the rest of [their] lives together."

After a year of dating, Trudeau proposed to Grégoire. The two were married in the spring of 2005. Becoming Trudeau's significant other required somewhat of a lifestyle adjustment, Grégoire told Maclean. The transition, however, was probably not as substantial as the one that comes with becoming a nation's first lady.

Maybe MObama is using her time with Grégoire — when they're not busy promoting girls' education — to teach a bit on keeping the love alive while taking care of an entire country.