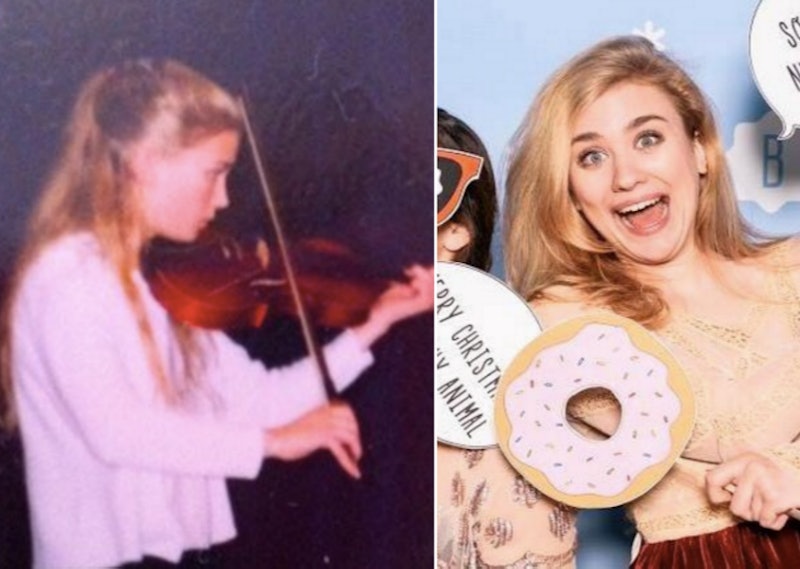 If you were a former goody-two shoes, you remember the awkwardness of high school well. You were paralyzed with fear at the mere thought of leaving campus to grab lunch with your friends. You didn't realize your peers even were making out until one day someone (gasp!) dropped a condom. Your high school yearbook quote was either "sorry, my mom said no" or "are you sure we're not going to get in trouble for this"? The only edge you lived on was the edge of your desk, front row and center, painfully taking notes on stuff that wasn't going to ever come up again in your whole human life, let alone next week's quiz.

And then, slowly and painfully, you molted. You went to college, or you moved away, or you just felt that subtle shift in the wind whispering sweet YOLOs into your ear. You found things you were passionate about, and stopped worrying so much about what other people thought. You found out that not all risks were bad ones, and stopped worrying so much about derailing your ~master plans~ every time you took one. You grew up and grew out of yourself, and before you knew it, you were ... well, balanced. Not all good, not all bad, but a decent enough mix of both.

The problem, though, with being a former goody-two shoes, is that you never quite leave that persistent little ghost of yourself behind. If you grew up hugging the sidewalk and openly weeping over bad math grades and are still reconciling it with your supposedly much chiller adult self, then you will recognize these struggles all too well:

Your Old Friends Are Still Shocked By The “New You”

You have yet to attend a single reunion of your high school squad without someone exclaiming, "Whoa, you drink now?" or something to that effect.

They're like, "Oh, yeah, that makes sense," while you're all, "NO, I'm basically a modern day James Dean, be more surprised by my teenage obedience."

When that old dude needs to pee at the coffee shop, you're the one he asks to watch his laptop. When there's a baby screaming in the line at Whole Foods, you're the one everyone low key glances at expecting to help the poor strung out parent with a patented goody-two grin. And don't even think about getting cray while you're out with your friends — you might as well have "Designated Driver" tattooed to your forehead.

All the kegers, the hookey-playing, the midnight parties in some kids' garage while his parents were out of town. It was all happening in the periphery, and you were blinded by your Goody Goggles for years. Yes, it was probably all for the best, because if you had gone you probs would have wet yourself in fear that your parents would cosmically find out through a ripple in the Good Kid Gone Bad Force. But it doesn't make it any less awk when everyone's reminiscing about a gloriously terrible joint mistake that YOU CAN'T REMEMBER.

Every Now And Then You Have Weird, Inexplicable Guilt For Things You Haven’t Had In A Long Time

You don't know exactly what triggers it, but one second you can be comfortable expressing yourself at whatever level you usually operate at, and then BOOM — there is weird, conditioned, external guilt for things that you know, deep down, you shouldn't have ever felt guilt for in the first place. It doesn't make the feeling any less valid, but it does make it annoying AF.

There is a diary entry from my 18th year of human life where I freak out, torn to exhausting, beautiful, maddening shreds because — wait for it — a boy hugged me on the quad. And no, "hugging" was not a metaphor. Good Lord.

Like, you don't need their permission. You're a grown ass human being who can backpack to Europe and move to a new city and pierce whatever the hell you want. But maybe just run it past the 'rents first because reasons, don't look at us, we CAN'T HELP IT.

You Have Realized That Your Goody-Two Shoesing Was Borne From A Desire To People Please, But You're Still Not Quite Sure How To Turn That Off

Every time you think you've evolved past that excruciating and unrealistic need to be liked by everyone on this planet, so help me God, the mailman gives you a funny look and boom, existential crisis. The next phase of your goody-twovolution is hopefully acknowledging that you can only do your best and stop giving a crap about the background noise, but unforch you're not ~quite~ there yet.

You’re Still Catching Up To Your More Adventurous Peers

If you're somewhat of a late bloomer, it feels like the middle ground of where all your peers are at — physically, emotionally, sexually, what have you — is like a finish line that keeps creeping forward every time you get close to it. Most days you will be reasonable with yourself and remember there is no "normal" and we all get to where we need to be in our own time, but other days it is frustration central. But part of respecting your own hustle is knowing that it's not a race against anyone else. You do you, whether you're a goody-two shoes, a ne'er-do-well, or in that murky place in between.

More like this
These Are The 3 Most Mellow Zodiac Signs
By Kristine Fellizar
20 Christmas Movie Quotes That'll Get You In The Holiday Spirit
By Alexis Morillo
Emily Ratajkowski & Pete Davidson's Astrological Compatibility, Revealed
By Nina Kahn
Lily Collins Has Pretty Strong Opinions About Being A ‘Nepo Baby’
By Darshita Goyal
Get Even More From Bustle — Sign Up For The Newsletter