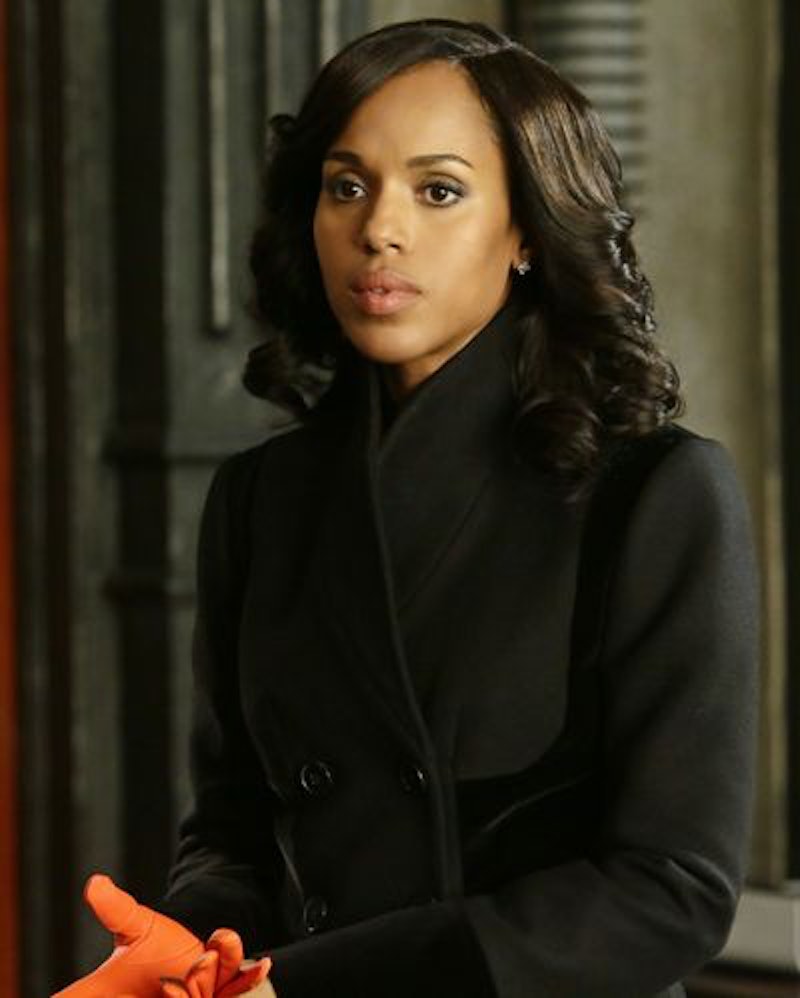 In the entire history of Scandal, I don't think there's ever been a time when Olivia Pope's love life hasn't been in shambles — not that she needs a love life, of course. But lately, things have been worse than ever. She finally ditched Fitz and Jake, but it's clear that she still has feelings for both men, and on Thursday night's episode, those feelings got stirred up even more. Not only is Fitz making a habit of sowing his wild, presidential oats, but Jake is still with his girlfriend, and things are getting pretty serious. So serious, in fact, that Jake announced he's engaged on Scandal , and it's definitely freaking Olivia out.

So how did this happen? Earlier this season, after Jake and Olivia officially parted ways, he told her that he's dating a woman named Vanessa... despite the fact that he was still sleeping with Olivia at the time. Um, not cool, Jake! Hearing this news made Olivia cut that relationship off, but Jake is still with Vanessa. How do we know that? Oh, because Olivia's been stalking him (with Abby's help) so she knows everything about Jake's relationship without actually having to talk to him to find out.

This is all well and good, until one night when Jake creepily appears in Olivia's bedroom. OK, listen, I wouldn't kick Jake Ballard out of bed, but if he appeared in my room in the middle of the night after letting himself into my apartment? That's a little much.

Jake fills Olivia in on the fact that he knows she's been following him — since, you know, he's the head of the NSA, no big deal — and then, he tries to tempt her to take him back, which almost works, because seriously, have you seen him? But then Olivia tells him to leave, and that's where everything falls apart.

Olivia goes to her dad's house for her weekly family dinners (which I still don't understand), and since he wasn't expecting her, he already had company over. Yep, it's Jake and Vanessa, sitting around the table with grins on their faces like any relationships in this room are actually healthy and functional, and announce their big news: They're getting married. And judging by the look on Jake's face, this is a direct response to Olivia turning Jake away. I don't know Vanessa, but she seems lovely, and if Jake's using her to make Olivia jealous, she definitely doesn't deserve that.

Will this be the catalyst for Olivia to choose Jake, for once and for all, or will it be the reason they're done for good? Knowing Scandal, I have a feeling that the Jake/Olivia relationship won't be dying anytime soon, but this definitely isn't helping things. And maybe this girl will finally stop hanging out with her sketchy dad?! Nah, probably not.

More like this
Kaley Cuoco & Tom Pelphrey Just Made Their First Public Appearance As A Couple
By Hugh McIntyre
What Does Michael Peterson’s Family Think Of 'The Staircase'?
By Arya Roshanian
Everything To Know About ‘The Handmaid’s Tale’ Season 5
By Amanda Whiting
The 'Grey’s Anatomy' Season 18 Finale Might Have Had A Sneaky April Easter Egg
By Grace Wehniainen
Get Even More From Bustle — Sign Up For The Newsletter