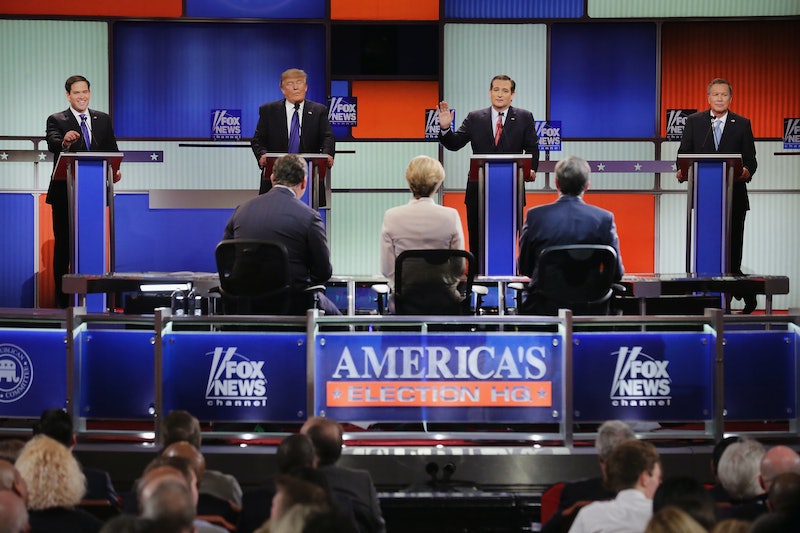 The seemingly millionth GOP debate took place on Thursday night. The event came just one day after a Democratic debate was held in the very same city at the nearby Miami Dade College. Republican candidates took the stage at the University of Miami rather late, as the CNN event was reportedly set to start at 8:30 p.m. but began at 9 p.m. instead, allowing for remarks to be made by RNC Chairman Reince Preibus as well as for continued political analysis. The delay certainly set the tone of the evening. GOP debate memes and jokes began emerging well before the event had even started.

Candidates appeared rather subdued as they took the stage, and then promptly observed a moment of silence for former First Lady Nancy Reagan, whose funeral is set to take place on Friday at her husband's presidential library in Simi Valley. Following a performance of the national anthem, John Kasich, Marco Rubio, Ted Cruz, and Donald Trump all gave opening statements that appeared far less caustic than language heard in the previous debate. Though there have been far fewer verbal fireworks erupting, social media nonetheless had plenty of fodder to poke fun at the debate the whole night through.

We've all spent over a day of our lives watching all 12 GOP debates, so those who tweet, use Facebook, or Instagram their debate-watching experiences have become well-oiled machines when it comes to turning these routine events into more humorous experiences. Even the sheer fact that this final GOP debate has been subdued has warranted its own series of jokes and memes. If there is anything to take away from the war of words between Republican candidates, it's that the American public has found incredibly clever ways to make this necessary part of the election season all the more bearable.

As candidates prepare to embark on more campaign stops and their many debates fade with time, those aching for more political events can take comfort in the fact that we still have eight months until the general election in November. That's a whole lot of memes and jokes to compile from now until the final votes have been tallied and a new president has been named. Give yourselves a pat on the back, politically minded social media users, and prepare your best GIFs, Photoshop fails, and wisecracks for a whole lot more political madness.