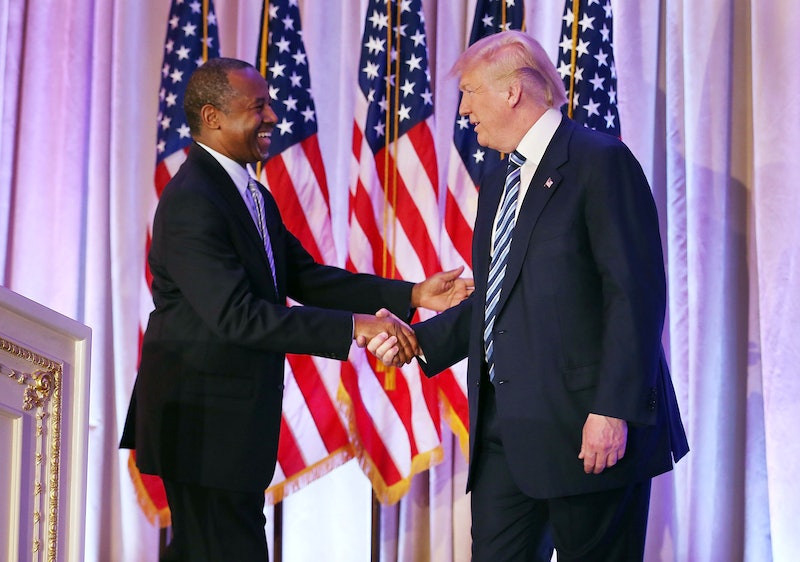 Former Republican presidential candidate Ben Carson has officially endorsed Republican front-runner Donald Trump. Trump responded to the endorsement at a press conference in West Palm Beach Florida Friday morning, stating, "Perhaps there are two Donald Trumps," and, "I'm a big thinker." He continued by discussing the states he's won so far in the primaries and the states to come, saying, "I will get states that are unbelievable, that are unthinkable for the Republican party and we should embrace it."

Ben Carson's endorsement comes just a day before D.C. and Wyoming's primaries. It will be particularly important to see how D.C. votes on Saturday, considering that Trump has run his campaign as an anti-establishment political outsider. The registered Republican voter population in D.C. is small, making up just 6 percent of voters. But it will be an important city to win this time around. Carson took to Twitter early Friday morning to suggest that Trump is just the person to "fight for change in DC," as a "leader with an outsider's perspective & the vision, guts, & energy to get it done."

And so, the Republican presidential race heats up with a doctor endorsing a businessman — what a strange election this is in 2016. Carson published a full statement of his endorsement to his Facebook page Friday morning that reads:

Our country is at a crossroads and in the midst of a moral crisis. We must be careful not to continue our current path, which is littered with uncertainty at best and ruination at worst. We can make changes to our system and that change starts now with, “We the People.”

It is with that in mind that I endorse Donald Trump for President. I have known Donald for many years. He is a successful businessman who has built a recognizable global brand that no one can question. His experience as a businessman is exactly what we need to move our economic engine in the right direction and empower those who have been left out of the American dream for far too long.

With our support, I am sure that we can help restore America's values and faith.

I know there will be some who want to underscore our differences and others will wish to return to statements he has made about me in the past, but that is politics. As a man of faith, all is forgiven and we have moved beyond the past, as the future is now.

Join me in supporting and rallying around the only candidate the GOP has that can defeat Hillary Clinton in 2016 and return America to that shining city on a hill.