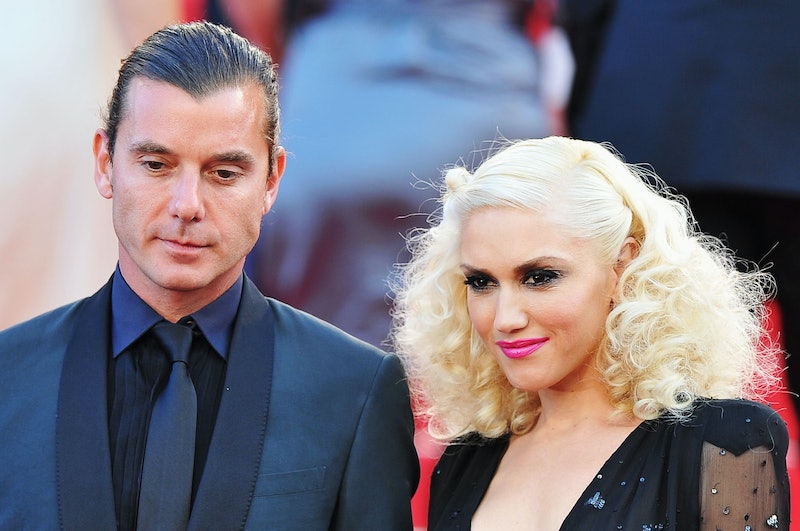 I'm sure I've mentioned this before, but one of my favorite things in the pop culture world is when celebrities let me be a fly on the wall in their personal lives. So imagine my delight to find that Gwen Stefani's "Misery" lyrics indicate that she is singing about her relationship with ex Gavin Rossdale. Now, don't get me wrong. I'm not glad that Stefani is miserable, by any means, or that her relationship collapsed; what I'm glad about is that she feels empowered enough to put what she's feeling into a song and share it with the world. That, for, me is proof that she's processing her emotions and moving forward. (As is the fact that she's in a seemingly-serious relationship with Blake Shelton already. If you wanna sing about that too, girl, I am all ears.)

But divorce is a huge huge thing, and if Stefani is brave enough to write down how it feels from the inside, the least we can do is give that courage the respect it deserves by taking the song ultra-seriously from the outside. And the best way I know of to do that is to take a super close look at Gwen Stefani's lyrics, to make sure we really hear what she's trying to say with "Misery." And also to say a quick thank you, because she does a stellar job of laying out her cards really clearly on the table. Let's take a look at some of these truth-bombs.

Oh, man, this feels so familiar, that sensation of trying to be smart about it, but just missing the physical presence of the other person. And I'm talking about people I dated for a year or less; meanwhile, Stefani and Rossdale were married for 13 years and have three kids together, Kingston, Zuma, and Apollo.

I feel like it's super brave of Stefani to include this portion, because she's acknowledging the very strong feelings she still has for her ex-husband. Not a lot of people would have the balls to admit to that, instead hiding behind all the angry emotions and pretending they don't care, like Stefani acknowledged being tempted by earlier.

This. This is exactly how it feels to have broken up with someone for cause. You want nothing to do with them, but you also kind of can't wait to see them again. It's the worst, and she exemplifies it perfectly.

And, finally, there's that weird thing where you still feel partially responsible to punish your partner, even when the relationship is totally ended. Like, because they're no longer together, Gwen Stefani has relinquished the claim to be able to say anything about Gavin Rossdale's flaws, but I'm sure she still feels it. Even though the worst has already happened, there's a phantom limb there almost, still expecting apologies and groveling.

Part of me was worried that this song would be a real downer, considering its subject matter, but I feel like Stefani did a really killer job getting her feelings out in a clear, confident way packaged up in a song that's actually pretty enjoyable to listen to, even beyond all the wise words about the end of a relationship. So well done, Gwen Stefani! Way to find that silver lining in your divorce.