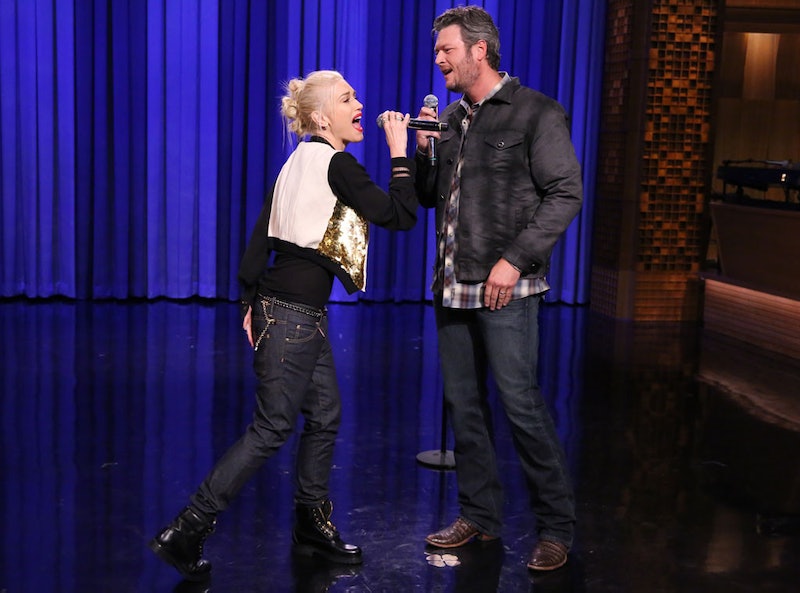 As if you couldn't tell already, the fantastical romance that many fans of The Voice have been speculating about between Gwen Stefani and Blake Shelton for a little while now has been officially confirmed by Stefani's rep in Us Weekly. That's right: Stefani and Shelton are in fact DATING. According to Stefani's rep: "Blake and Gwen are longtime friends who have very recently started dating." The pair were allegedly seen "getting cozy with each other at multiple Halloween parties in LA over the weekend," which also gives me desperate hope that somewhere out there is a hella cute couples costume picture of the two of them getting their spook on in style.

The adorable twosome have been flirting up a storm on the set of The Voice, so it comes as little surprise that they're taking the next step. It's also great news for heartbreak! Though Stefani has only recently filed for divorce from husband Gavin Rossdale (to whom she was married for 13 years), it's great to see her wasting no time in getting herself back out there and enjoying the company of a fine-looking gentleman. Country musician Shelton has also recently split from his wife of four years, Miranda Lambert, so yay for him, too. (Though I'm totally more excited for Stefani in this coupling. Can't lie.)

While it was more than a little tough to witness our girl Stefani going through every one of the major stages of heartbreak that we all do when we separate from someone we think is the love of our life (including the "miming of powerful, emotional songs in the bathroom mirror whilst crying uncontrollably" phase), it's always inspiring to see people pick themselves up again afterwards and finally find the strength to move on. Because that can be tough.

Most importantly, what are we daring to call this new couple? Stefelton? Sheltani? Figure it out and let me know.