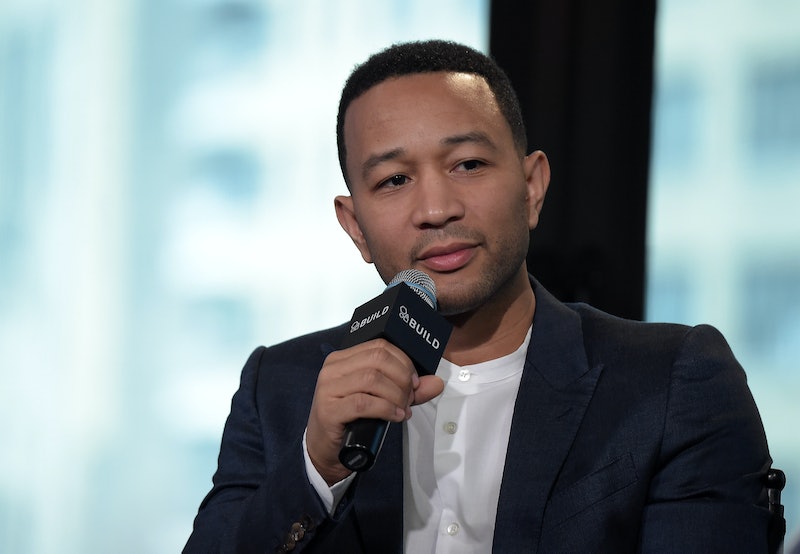 Protestors looking to shut down GOP frontrunner Donald Trump finally got their wish when a Chicago rally was canceled due to security threats on Friday. Demonstrators were reportedly violent well after the event had been announced as postponed, unfortunately. As pundits and political junkies alike clamored to assess the damages, a surprise Twitter feud appears to have erupted from the scuffle. John Legend and Donald Trump Jr. are feuding, and the singer is certainly making wife Chrissy Teigen proud with his takedown of the GOP frontrunner's son.

The war of words began when Trump Jr. tweeted about protestors, mocking five students who he reportedly stated were unsure as to why they were even demonstrating in the first place. Trump Jr. failed to cite a single source in that claim, and reports from major media outlets like CNN, USA Today, and the Chicago Tribune contain not a single quote in which a protestor was interviewed and articulated similarly.

Legend responded with something thousands of demonstrators who have protested Trump rallies were undoubtedly thinking — that the Donald's problematic view of race was what ultimately moved protestors to take action. The feud attracted the interest of Trump supporters, who tweeted their ire at the crooner, suggesting he was simply "uneducated." Legend was quick to correct, unleashing quite the fun fact: Both he and Trump Jr. are alums of the University of Pennsylvania.

Trump Jr. responded in a surprisingly subdued fashion — especially compared to his father. Prior to announcing his candidacy, the GOP front-runner and real estate magnate was better known for his Twitter feuds than his political aspirations. That spirit of conflict apparently is an inherited trait, though less so with Trump Jr. The younger Trump turned Legend's response back onto him, implying that he was guilty of the same microaggressions the presidential hopeful's son had called out in his initial tweet. "That's why the country is so divided now!" Trump Jr. tweeted. The Donald has yet to respond to his son's statements or Legend's, though he has previously feuded on the social media site with Teigen. Understandably, Teigen was overjoyed with her husband.

What Trump had to say about the canceled Chicago rally certainly isn't helping bolster his son's point of view, however. The Donald referred to protestors as "thugs" — a racially charged word that carries with it a whole host of negative connotations. Since tweeting an article by The Daily Beast indicating that Trump engaged in racist business tactics, Legend has stayed fairly silent, though in far better standing than Trump Jr. in terms of accountability. Whereas Trump Jr. was either unable or unwilling to cite sources for his claim, Legend has an entire Department of Justice file apparently on his side, from a 1973 lawsuit against the Trump organization regarding Fair Housing Act violations. As stunning of a spectacle an ongoing Trump Jr.-Legend Twitter feud may be, the acclaimed singer may very well have quieted the Donald's son once and for all.

More like this
Zendaya Shut Down Those Viral Pregnancy Rumours
By El Hunt
How To Fight For Reproductive Rights, Based On How Much Time You Have
By Courtney Young
How 5 People Upended Their Lives To Fight For Abortion Rights
By Hannah Smothers
Boris Johnson’s Leadership Is In Question – Again
By Bustle UK
Get Even More From Bustle — Sign Up For The Newsletter