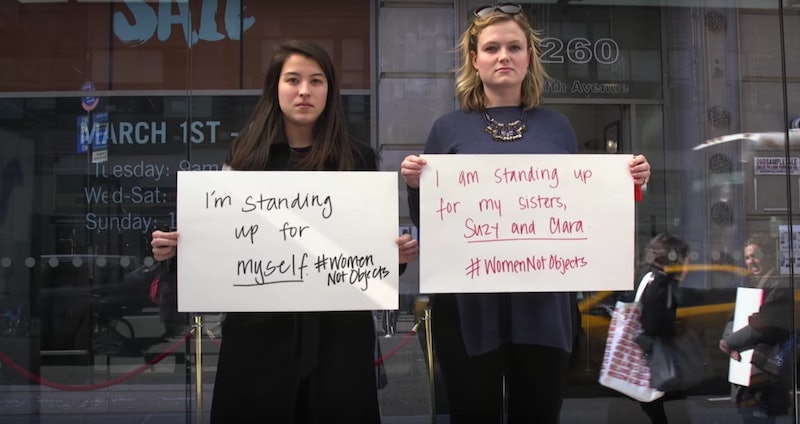 "The harm caused by the objectification of women in pop culture is not theoretical," reads the video "#IStandUp Against the Harm Caused By Objectification of Women in Advertising" by Women Not Objects. The video is part of a campaign to show what exactly objectification looks like — and how it harms women. Though there's a lot of debate about where the line is between depicting women as sexual beings and objectifying them, it's clear that there's a big difference between showing women in control of their own sexuality and depicting women in submissive positions or literally as objects, which is how the media often depicts us.

Women Not Objects's video shows not only media depictions in which women's bodies are used to advertise products but also the consequences of these images. Between plastic surgery and dangerous beauty procedures like Kylie Jenner's "lip challenge," women learn to objectify themselves by putting how they look before their physical comfort and emotional well being. As Capital University's Kacey D. Greening puts it, "women are conditioned to view their faces as masks and their bodies as objects."

To remind the world that they are people, not objects, women are using the hashtag #IStandUp. Learn more about objectification and its most dire consequences in the video below:

More like this
Iran Has Issued A Death Sentence Over Mahsa Amini Protests
By Catharina Cheung, Darshita Goyal and Maxine Harrison
10 Thanksgiving Alternatives You Can Celebrate This Month
By Katie Mitchell
Amanda Gorman Shared A Powerful Message On Meghan Markle’s Penultimate Podcast
By Darshita Goyal
Kim Kardashian Fans Are Calling On Her To Condemn Balenciaga’s Latest Campaign
By El Hunt
Get Even More From Bustle — Sign Up For The Newsletter