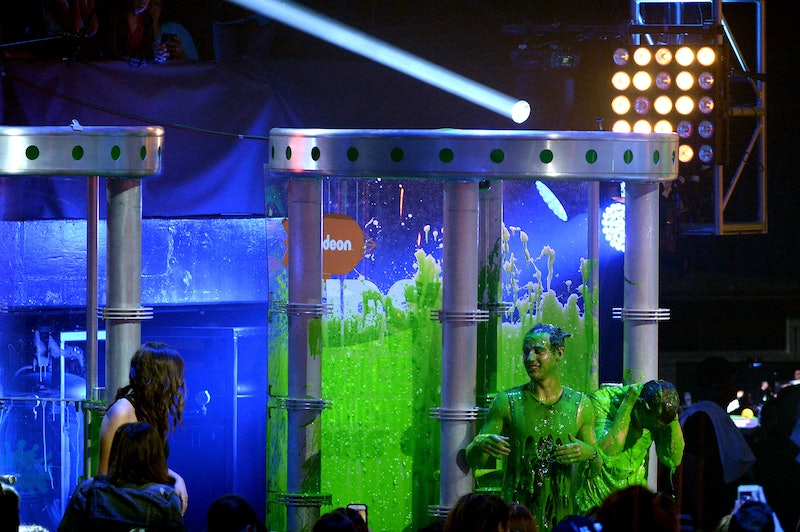 It's a wonder that anyone who attends The Kids Choice Awards bothers dressing up, what with all that green goop flying around. This year, recipients of Nickelodeon's famous slime included everyone from John Stamos, an innocent audience member, to Blake Shelton, the host of the evening. One couldn't even debut a new clip of an upcoming movie, like Jason Sudeikis and Josh Gad did for Angry Birds, without getting slimed. Not that it was unusual — you can't go 10 minutes at any Kids Choice Awards without a star getting covered in the unnaturally colored stuff. This green goop has been getting flung around Nickelodeon's live shows since the '80s, but where did slime come from, and how did it take hold?

According to Mental Floss, slime made its first appearance on a Canadian sketch comedy show that ran for 11 years (1979-1990), You Can't Do That On Television. Apparently, the show's prop masters were asked to make a slime-like substance, but weren't told it'd be dumped on a child, so they created something that included green latex paint and other gross, unhealthy substances. Once they learned what the slime's use would be, they changed the formula so they wouldn't be pouring something on a child that would make him or her sick. Instead, they used a mixture of green jello and flour, and since then, slime has evolved to have various different components, possibly based on how quickly the mixture needs to made or what's in a show's budget. Summer Sanders, host of Figure It Out, told MTV News that in her time on the show from 1997-2000, the slime used was actually pretty tasty:

"The slime was really cold. They kept it refrigerated, because it was vanilla pudding and green food coloring,” So half of the reaction from the panelists was the fact they were getting slimed, but the other half was that it was so freezing that it just shocked you. But that's why [Danny Tamberelli] would eat it all the time, because it was just vanilla pudding."

Soon, because kids seemingly couldn't get enough slime, the green concoction oozed on to other shows like Double Dare, Wild and Crazy Kids, and Figure It Out. It was so popular that Nickelodeon also went on to create toys that piggybacked off kids' intense desire to get slimed, like slime shampoo and the gooey material Floam.

Back in the '90s and early '00s, a kid who wanted to get slimed IRL could head to the now defunct Nickelodeon Studios in Orlando, where some of your favorite shows, including the daily game show Slime Time Live, were filmed with live studio audiences. Even if they weren't on the show, a kid touring the studio could get slimed at any moment — how cool is that? Now, sadly, that isn't the case, as the area is home to the Nickelodeon Hotel. The hotel does host a Double Dare Live! show where one can get slimed, but it's not quite the same.

These days, Nickelodeon slime is kept mostly to awards shows like the Kids Choice. It makes me nostalgic for the good ole days, when slime fell from the heavens in bucket loads on all of our favorite Nickelodeon stars, but alas, things have changed and presenting at an awards show is the closest any of us will ever get to re-living that dream.