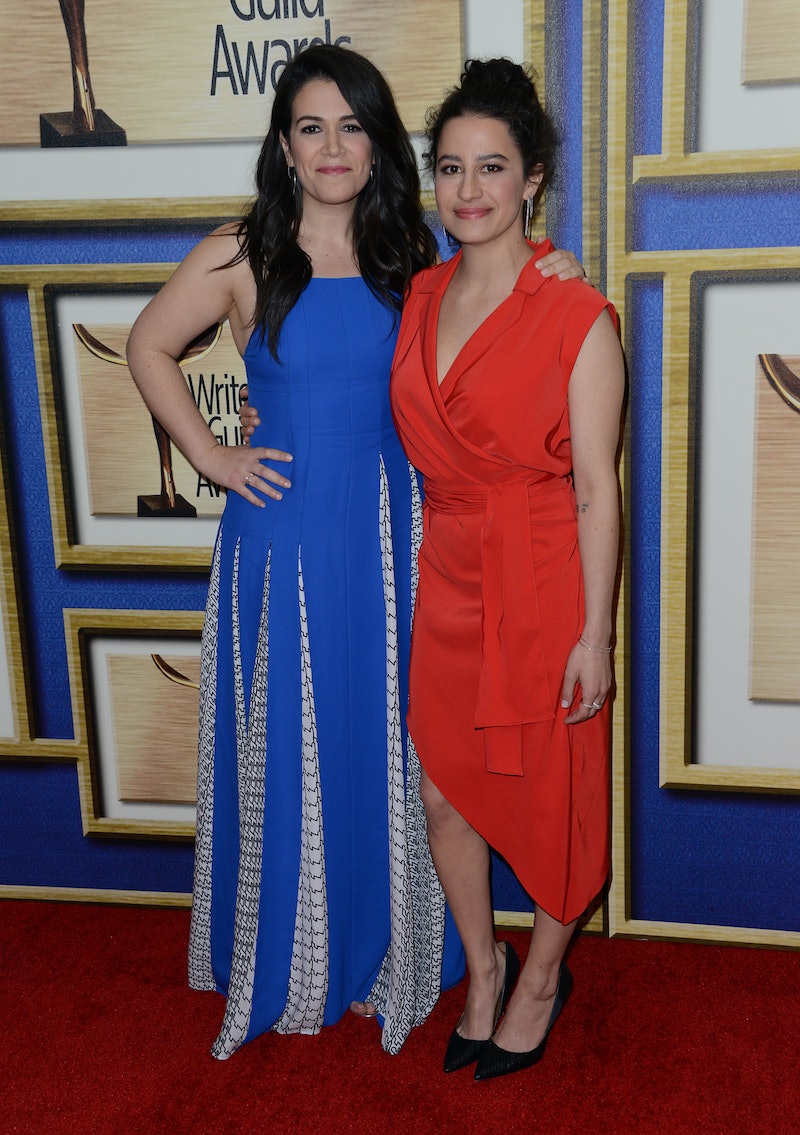 Although they're only a few episodes in, Broad City's third season proves week after week why it's one of the best shows on TV right now. And guess what? It's only getting better, since there's a Hillary Clinton cameo on Wednesday's upcoming episode. I can't be the only fan who freaked out in December when Abbi Jacobson and Ilana Glazer shared a photo with the presidential hopeful. Adding to that excitement, on Saturday at Marie Claire's SXSW party, E! News interviewed Jacobson and Glazer, who spilled what Clinton was like on the Broad City set. Apparently it was just as magical as it sounds. Glazer said,

She's like an A-list historical figure. Meeting her? It was a trip. It was wild.

HRC stayed on the set for approximately 45 minutes, during which time she bonded with the ladies over none other than Sex And The City . This makes much more sense when you learn that a SATC alum is another Broad City guest star. Glazer explained,

We talked about Cynthia Nixon and Sex and the City... Cynthia is on the same episode. [Clinton] was like, "I like her."

Out of all the characters on the show, I could totally see Hillz relating more to Miranda, than say Charlotte or Samantha. Jacobson's summary of their time with Clinton is pretty perfect: "We were shooting and then we had to reset the camera for a different take and we were just chatting, just three girls chatting." Ugh, that sounds like a dream come true.

It's worth keeping in mind that during their panel at SXSW, the Broad City stars clarified this isn't necessarily a political statement. According to The Guardian, Jacobson explained,

We wrote season three a year ago, at this point. That’s not our show really: "Let’s make a political stance here." It was really more that this is something Ilana’s character would do. Hillary, even regardless of where we stand — and we love Hillary — is such an iconic figure. These girls being around her is not an everyday thing. It’s how we feel being around her: "Wow, this is a different world."

That explanation totally makes sense. Whether or not it echoes their personal views isn't the point; it's more about portraying how their characters would react. Glazer also added, "Because she’s this icon, we’re trying to make really good TV. I think you’ll agree it’s just a good episode of TV because Hillary Clinton is in it."

Personally, I cannot wait for the episode. I'm crossing my fingers that Clinton let's out an Ilana-style "YASSSS, QUEEN."

More like this
Matt Hancock Broke a Major Rule With I’m A Celeb
By El Hunt
What To Know About Martin Bashir After Watching 'The Crown'
By Bustle UK
How Is The British Royal Family Related To The Romanovs?
By Karen Fratti
Netflix Bumped Up The 'You' Season 4 Premiere Date — Here's What To Expect
By Bustle Editors
Get Even More From Bustle — Sign Up For The Newsletter