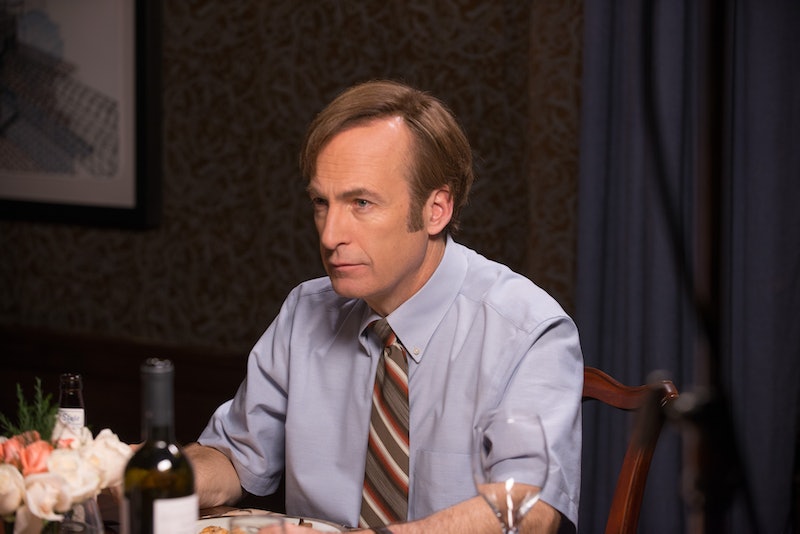 Considering the fact that it takes place chronologically before its predecessor, Breaking Bad, you could say that all of AMC's spinoff series Better Call Saul is one extended flashback scene. A flashback scene that contains its own flashforwards, of course, considering those season-opening vignettes that take place after the events of Breaking Bad. But things got even more temporally confusing this week when the flashback that is Better Call Saul itself flashed back to a date even further back in time, and we met the eponymous character that gave the episode its title, "Rebecca." But just who is Rebecca, and what is her importance to the show?

Before it caught up with the events of last week's episode, Monday's hour opened with a prologue of sorts, rewinding time to check in on the relationship between the McGill brothers long before the events of the series began. In this prologue, Chuck is married to a musician named Rebecca (guest star Ann Cusack); she's a professional violinist, so famous that Yo-Yo Ma himself came to her and Chuck's wedding.

This blissful marital scene is marred by several things. For the viewer, the knowledge that Chuck ends up alone and afflicted with electromagnetic hypersensitivity looms over the events like an ominous cloud. For Chuck, it's his brother's impending visit that promises to spoil things. For one reason or another, Jimmy apparently missed the wedding and has never met Rebecca; this will be the first time Chuck introduces his irresponsible younger brother to his beautiful new wife.

It turns out that this introduction occurred during Jimmy's first week at Hamlin, Hamlin & McGill. He had just started working in the mail room and spent a good deal of dinner complaining about how hard xeroxing is. But despite his older brother's disapproving looks, Jimmy eventually won Rebecca over with his infectious sense of humor. He told a string of lawyer jokes — and Rebecca even chimed in with one of her own: "What do lawyers and sperm have in common? One in three million have a chance of becoming a human being!"

Later, in bed after dinner, Chuck tried his own hand at cracking a joke: "What do you call 25 attorneys buried up to their necks in cement? Not enough cement!" But Rebecca was too distracted to give a proper laugh and it was clear that Chuck hated the fact that Jimmy was better at something than he was… even if that something was landing a punchline. That's obviously a sentiment that carries over into the present day, where we already know that Chuck can't handle the fact that Jimmy is turning out to be a halfway decent lawyer while we himself is ineffectual and house-ridden by his disease.

While this double-flashback was elucidating as to the long-simmering tensions in the relationship of the McGill brothers, it ultimately raised more questions than it answered. Namely — whatever happened to Rebecca? Did she abandon Chuck when he got sick? That doesn't seem likely, given how loving and attentive she seemed. Did Chuck's strange affliction find its origins in the stress caused by Rebecca leaving him? (Or even dying?) Or are the two events completely unrelated? More importantly, when will the show give us answers?

Given the slow burn pace of Better Call Saul, we may be waiting a while to find out.