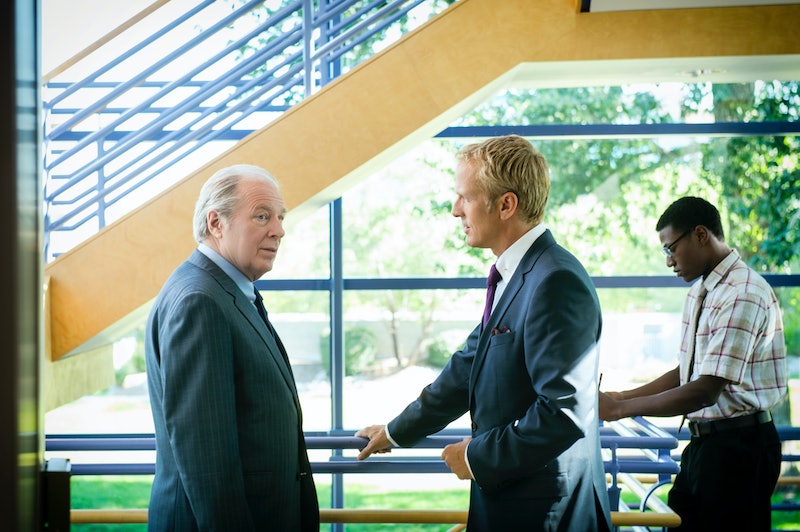 Breaking Bad is a series that is as famous for its villains as it is for its heroes. (Sometimes those two things were even one and the same; was Walt a hero or a villain by the end?) Tuco Salamanca, "the Cousins," Gus Fring, creepy Todd and his band of Neo Nazis… the list goes on. So it makes sense that Breaking Bad 's spinoff, Better Call Saul , would also have its fair share of memorable baddies. So far Nacho Varga, played by Orphan Black's Michael Mando, has filled that role with aplomb. But Season 2 has seen the rise of a new villain from an unexpected source… Jimmy's own big brother Chuck. So which McGill brother will emerge victorious from this clash of wills?

Although we didn't see Chuck in last week's Season 2 premiere, he came back in full force in this Monday's episode, "Cobbler." The hour opened with the afflicted McGill at the piano, practicing Fauré's Sicilienne (with the name "Rebecca Bois" handwritten in the corner of the sheet music). When Howard Hamlin came to visit his former colleague and deliver his groceries, he brought with him some unwelcome news: Jimmy had accepted the partner track position at Davis & Main, much to Chuck's chagrin.

Remember that Jimmy and Chuck were fairly close throughout most of Season 1, although it gradually became clear to the audience that Chuck was working to undermine Jimmy's progress at Hamlin, Hamlin, and McGill; their alliance only fractured in the season's penultimate episode, when Chuck finally (and forcefully) articulated his true opinion of his younger brother. He told Jimmy that he was not worthy to call himself a lawyer and that he hasn't changed since his "Slippin' Jimmy" days. This schism sent Jimmy on a downward spiral that he only just recovered from at the end of last week's premiere, determined to prove Chuck wrong. And now the former allies are the show's most bitter enemies.

In "Cobbler," Chuck even suffered through his electromagnetic sensitivity to take a trip to HHM to crash a meeting Jimmy was partaking in and see his brother practice law in the flesh. Although Chuck's presence initially threw Jimmy off his game, a quick and reassuring squeeze from Kim put him back on track. Jimmy was able to make the whole conference room laugh while Chuck could only scowl. When the brothers confronted each other afterwards, Jimmy asked Chuck why he came. "To bear witness," was his brother's only response.

So which McGill brother will emerge victorious in the end? The answer may seem somewhat self-explanatory, given that we know Jimmy survives to become Saul Goodman in Breaking Bad, while his brother Chuck is nowhere in sight during the course of that series. Whether Chuck actually dies or the brother simply have a falling out so big that they literally never see each other again, it would appear that Jimmy "wins," right?

But in reality, isn't "Saul Goodman" the very embodiment of everything that Chuck accused Jimmy of? He's not a lawyer, he's a con artist; and the fact that, despite all his efforts to prove his domineering brother wrong, Jimmy still ends up pulling cons for a living, is perhaps the biggest tragedy of the series. He gets his face on billboards, he gets the fancy car, he gets the lifestyle he always wanted… but in the process he proves Chuck right and lets his brother win.