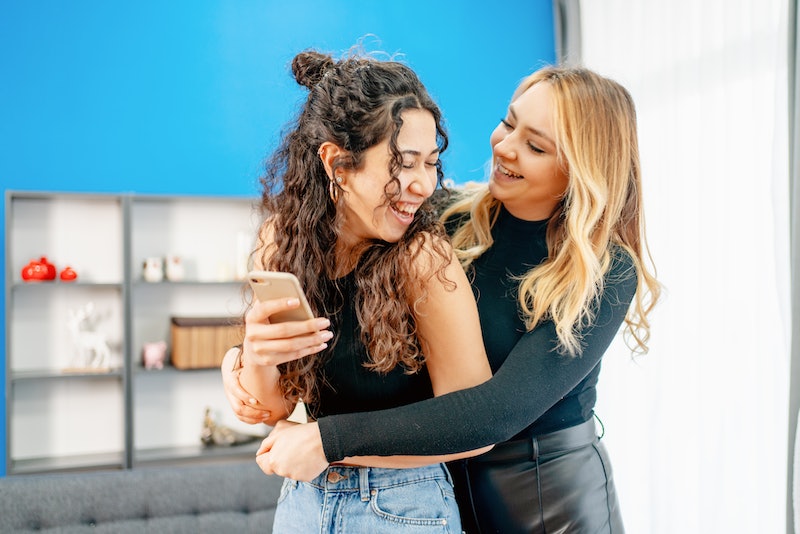 As a very feminine lesbian woman, I deal with a lot of sexism and misogyny on a daily basis. From men on the subway who see me holding hands with my girlfriend to strangers who think they can tell me to smile, there's no secret that the world can be a pretty crappy place if you're a woman, gay, or both. However, the one thing I think is important to clarify is that men aren't the only group of people who can be misogynists — I often find that other lesbians can be really misogynistic, too.

I first experienced lesbian misogyny when I was 18 years old and freshly out. I was hanging out in Capitol Hill, a queer neighborhood in Seattle, and walked by a masculine-presenting woman who catcalled at me. At first, I thought nothing of it. But she continued yelling, telling me to show her what I was working with, give her a smile, and stop being such a prude and go home with her. I couldn't help but wonder: Why would a woman exercise such horrible misogyny and sexism over another woman? It didn't make any sense to me.

As I started to become more in tune with the queer communities in both my hometown of Seattle and my college town of Boston, I noticed a pattern emerging. Masculine, butch, or androgynous girls who like girls would often emulate toxic masculine behavior, like acting offended if I declined to go first through a door they held open, insulting me when I didn't accept their offers to buy me a drink at the bar, objectifying my body, and undermining my sexuality.

I did some research and found out that this is a relatively common phenomenon. An article on Autostraddle from 2013, for example, brings up some important points about how femmes can feel disempowered when sharing spaces with butch women in instances when butch identity is conflated with misogyny. Don't get me wrong here — there's nothing inherently problematic or misogynistic about butch identity. Sometimes, however, lesbians who adopt more traditionally masculine traits, appearances, or performances can also end up acting out and perpetuating toxic masculinity.

I again found myself wondering why this happens so much in girl-on-girl communities, and why my identity as a lesbian may somehow be seen as an invitation to be treated mysogynistically by some other lesbians. Then I stumbled upon a paper written by Anika Stafford entitled, "Uncompromising Positions: Reiterations of Misogyny Embedded in Lesbian and Feminist Communities' Framing of Lesbian Femme Identities." The title may sound complicated, but Stafford's premise is not: She argues that since femininity is so frowned upon and punished in our society, femme lesbians are not exempt from discrimination from their non-femme lesbian counterparts, and therefore consistently experience the undermining of their sexualities and identities. Historically, as Stafford writes, compared to feminine lesbian sexuality, "masculine lesbian sexuality was seen as active and the butch lesbian, although persecuted for her homosexual desires, was recognized as a subject who could actively desire. In other words, according to some sexologists and psychoanalysts, by occupying a masculine subject position a butch could be taken seriously." A feminine lesbian, however, could not.

What I took away from Stafford's paper is this: Since male bodies are allowed to feel and express desire in our society, traditionally masculine female bodies are given more leeway to express their sexuality than traditionally feminine female bodies. Oftentimes, butch lesbians incorporate this cultural viewpoint into their performance of butchness — although oftentimes, it comes at the cost of the safety and comfort of femme lesbians. In short, what society deems "acceptable" for men, it also deems "acceptable" for butch lesbians, even though in a gender equal society, this behavior would be unacceptable for everyone.

All of which is to say that yes, lesbians can be misogynistic towards other lesbians, and while I'm sure femme lesbians commit this error as well, it's often built directly into butch performativity. The question, of course, then becomes: How do we prevent it from happening? One suggestion I might offer is that when people assume an aesthetic or identity, they never assume it blindly. For example, a femme lesbians might see other femme women wearing lipstick and dresses and think that's the best and only way to be femme; however, the reality is that there are a huge number of ways to be femme on both the inside and the outside. Emulating what you see in front of you isn't always the solution. In the same way, butch identity need not conflate with toxic masculinity. The patriarchy fails pretty much everyone, so there's no need to participate in a system that's so universally harmful.

Our world can be better. We just have to make it that way ourselves.