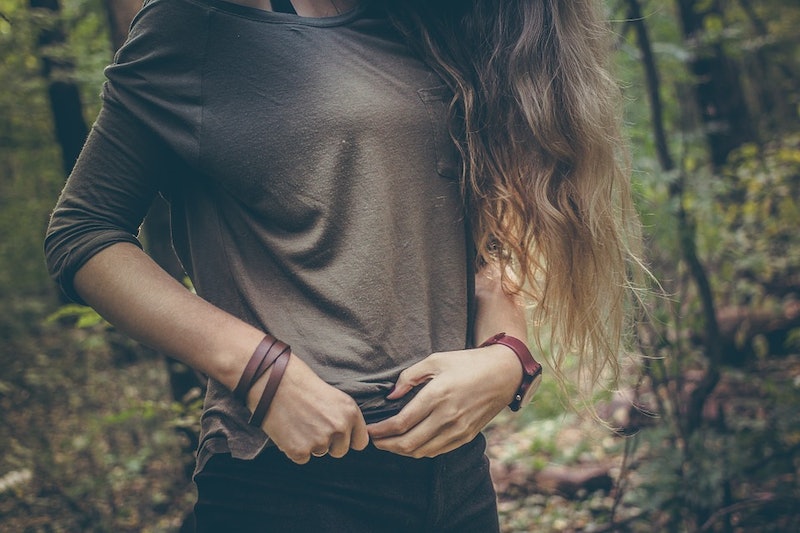 If you've recently received a Pap smear result that was classified as something other than "normal" or "typical," chances are pretty high that you're completely freaking out right now. You may currently be googling every medical term you can think of, and wondering if this means The Dreaded C Word. But the complex-seeming medical jargon used to classify Pap smear results is actually pretty easy to navigate if you have someone to guide you through what the different terms mean — which is exactly what I'm going to do below. Your doctor should give you lots of resources to help you understand what's going on with your smear, but if you still have doubts or are confused by some of your doctor's explanations, read on for more information about four Pap smear result categories.

Pap smears worldwide are graded according to something called the Bethesda system, which divides"abnormal" results into several categories: atypical, low-grade, high-grade and glandular (which is uncommon). Sometimes, a cancer diagnosis is made from a Pap smear, but these are phenomenally rare, and you're more likely to see your abnormal result classified in one of the categories below. The most important thing to remember when reviewing your Pap smear results: abnormality does not automatically mean cancer. That's the entire point of Pap smears: to catch signs of abnormal cells early and treat them properly, before they can settle in and develop the potential to be cancerous. It's an early warning system.

If you've got any lingering worries or want further information, check out Planned Parenthood, the National Cancer Institute, and the help sheets of the National Cervical Screening Program for more information, and don't be afraid to ask your doctor to expand on anything or further explain any worrying results. It's your cervix, after all — you deserve to know what's happening to it.

A low-grade abnormal result is, in the majority of cases, not anything to be unduly concerned about. It means that there are signs of cell change that could point to a human papillomavirus (HPV) infection in your cervix; the designation LSIL stands for "Low Grade Squamous Intraepithelial Lesion," which sounds utterly terrifying but isn't all that problematic. "Squamous" means the cells that make up the cervix lining, while "intraepithelial lesions" are the changes in the cells themselves, which in low-grade cases are minor. (The cell changes don't even necessarily mean that you have an HPV infection; they could also result from thrush.) But even if you do have an HPV infection, there's no reason to freak out. HPV is a hugely common STD; the Center for Disease Prevention And Control actually estimates that nearly every sexually active adult of either gender will contract it at some point in their lives. And, crucially, it often clears up on its own.

After you have a low-grade of LSIL result, the next step will be to get a Pap smear 12 months later, to determine whether the HPV has stuck around or resolved by itself, which it does in the vast majority of cases: the Australian Cancer Council estimates that most HPV infections clear up in between one to two years.

The American Congress of Obstetricians And Gynecologists also makes an important point about Pap smears and how they differ from biopsies. "SIL is not a diagnosis of precancer or cancer," ACOG says. "The Pap test is a screening test. It cannot tell exactly how severe the changes are in cervical cells. A cervical biopsy is needed to find out whether precancer or cancer actually is present." So you need to remember that an abnormal Pap smear of any kind isn't automatically a diagnosis of cancer, or anything else — it's just a detection device, no more.

High-grade abnormalities indicate that the changes caused by HPV in cervical cells have progressed and need a bit more attention. This result means that the infection is hanging around untreated and causing problems, essentially. There's another potential diagnosis that leads to the same treatment progression: ASC-H, or "atypical squamous cells cannot exclude high-grade squamous intraepithelial lesion." Essentially that means HSIL is suspected, but it's unclear in the Pap itself.

Because it's a further progression, you won't be told to wait for your next annual Pap; both HSIL and ASC-H results mean you'll be referred for a colposcopy, which is essentially a procedure where the cells of the cervix are examined via magnification. Planned Parenthood describes the instrument used in a colposcopy as "like binoculars with a bright light mounted on a stand," so you'll likely feel like somebody's bird-watching in your cervix during your exam — but it doesn't actually touch you.

Colposcopies are more commonly referred if you're over 29, even if you've just had recurrent LSIL results. Depending on your physician, they may opt to do a biopsy at the same time, which is far less terrifying than it sounds. (Some physicians only do a biopsy if the colposcopy shows up abnormal results; others do one no matter the results.) The biopsy will involve taking a cell sample from your cervix using a tiny instrument called a curette, or a very small skin punch tool. It will hurt a little, but likely not too much. Once you get results from those tests, treatment proceeds from there.

According to the National Cervical Screening Program, less than 1 percent of high-grade abnormalities indicate cervical cancer. So if you get these results: please do not panic.

Atypical glandular cells, or AGC, are diagnosed in a Pap smear when another type of cell in the cervix, in its inner canal and inside the uterus, are found to have changed and need more attention. This is rarer than typical abnormal results: a five-year study published back in 1996 found that only 0.2 percent of the 68,000 Pap smears it studied had AGC. It's also more concerning than typical abnormal results: One in six women who have an AGC result will go on to have cervical cancer, according to the Journal of Lower Genital Tract Disease.

This diagnosis mean that your physician will do a colposcopy, a biopsy, and, if necessary, an endometrial biopsy ( this is usually done if you've got a family history of uterine or ovarian cancers). An endometrial biopsy involves collecting tissue from the uterus itself (or endometrium) to see if that's where the cells are originating.

A Pap smear that comes back with cancer in it is phenomenally rare; only 4.5 women per 100,000 have this result. There are various Pap smear results that mean a cancer diagnosis: squamous cell carcinoma means cervical cancer, endocervical adenocarcinoma in situ means cancerous cells are present but are still in the cervix, and adenocarcinoma means that cancer may be present not only in the cervix but also in the uterus, ovaries or elsewhere.

Obviously this diagnosis will lead to many more tests and biopsies, including one called a "cone biopsy" that removes a cone-shaped wedge of tissue from your cervical tissue. In some cases, this may actually be part of the treatment; the physician will try to target the cone to remove as many abnormal cells as possible.

But no matter what results you get, the important thing to remember is that things aren't hopeless — even if your results are scary, you're better off for having caught things early on.

More like this
This Company Will Send STI Tests Right To Your Door
By Lexi Inks
Are Sagittarius & Sagittarius A Good Match? Astrologers Weigh In
By Kristine Fellizar
Try These 3 Manifestation Rituals To Feel Healthier Than Ever
By Brittany Beringer
The 8 Best Pilates Exercises For Lower Back Pain
By Carolyn Steber
Get Even More From Bustle — Sign Up For The Newsletter