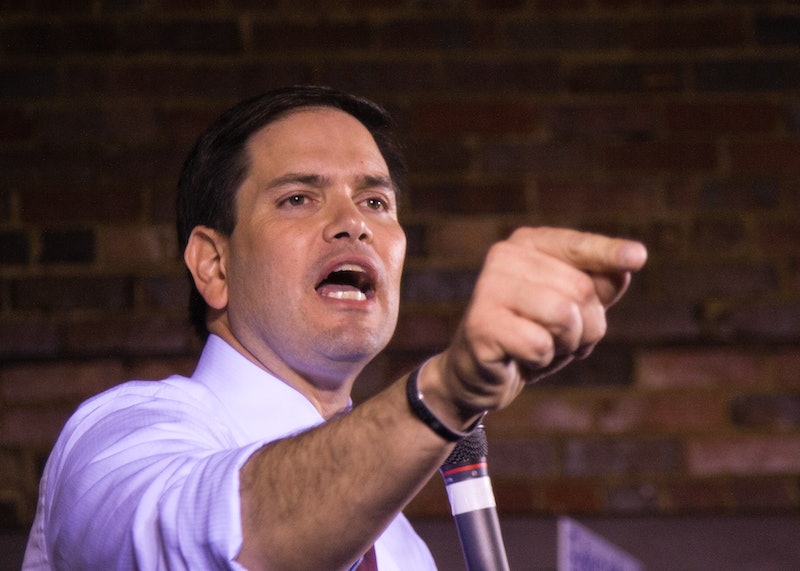 In a press conference in Florida on Saturday, Marco Rubio made a surprisingly human plea to stop Donald Trump and joined the impassioned #NeverTrump campaign. The video of Rubio's anti-Trump speech quickly went viral, garnering more than 275,000 views in just three days. While Rubio has been criticized in the past for being too scripted, the Florida senator didn't hold back, showing emotion as he essentially begged people to reject Trump as the next president, just days before voters in the Sunshine State head to the polls for Mega Tuesday. However, despite his efforts and the viral video, Rubio's #NeverTrump contribution might be too little of an effort made too late in the election for the presidential hopeful to regain his "Marcomentum."

In the video, Rubio speaks candidly about what he believes to be the detrimental effects of Trump's campaign on American politics. Specifically, he warns that if Americans continue to support Trump and he remains the GOP presidential frontrunner, the political system as we know will end in "chaos and anarchy."

There's a broader issue that happens in our political culture in this country, and this is what happens when a leading presidential candidate goes around feeding into a narrative of anger and bitterness and frustration. I think that we all need to take a step back and ask ourselves if we are contributing to this, because if this continues, I do think this county will be ripped apart at the seams, and we will be incapable of solving any of the major issues that we have.

On the eve of the third Super Tuesday — which is incredibly important for Rubio's campaign, as his home state of Florida is participating — Trump was projected to win both Florida and Illinois. NBC/Marist polls predicted that Rubio would lose to Trump by more than 20 percent, and would beat Ted Cruz by only one percent. In past primaries and caucuses, Trump performed consistently in early entrance polls, and there's no reason to believe he would perform any worse this time around. Rubio would have a difficult time bouncing back after an embarrassing loss in Florida, and his passionate #NeverTrump press conference was likely too late to change voters' minds.

Despite the questionable efficacy of his press conference, Rubio made many accurate and important claims about Trump, as well as how the media has helped his campaign's momentum by over-publicizing his offensive remarks:

I think the media has to bear some responsibility. For too long, those comments were ignored. Some people thought they were cute ... Every time Donald Trump offends someone, says something ridiculous, says something offensive, it's wall to wall coverage and that has elevated him more.

Many Rubio supporters don't think his message was too late, though, and have expressed support on Twitter, continuing with the #NeverTrump message.

Trump's campaign has never slowed down due to other candidates' attacks on him, so it is unlikely that Rubio will do him any significant damage. But hey, even if this new attack doesn't work out in Rubio's favor, hopefully he'll be as proud of himself for it as he was for calling out Trump for repeating himself during a debate.