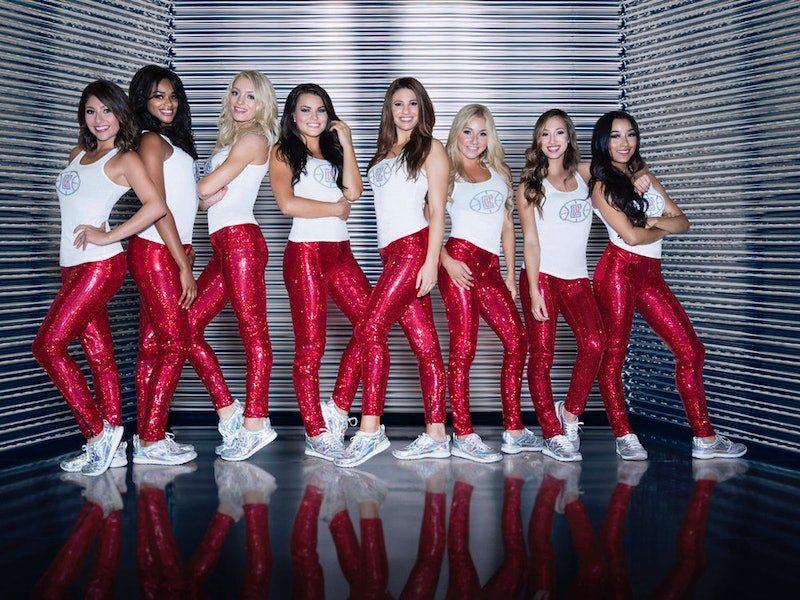 E!'s newest reality show, L.A. Clippers Dance Squad, has brought the awesome NBA dancers into a much-deserved spotlight, but that spotlight is also prompting people to ask some serious questions about the squad. For example, how much do the L.A. Clippers dancers get paid? Exact figures aren't publicly available, but it appears to be unlikely that the dancers are paid in the millions the way many players on the court are.

According to a 2000 Sports Illustrated report, some of the dance teams were allegedly paid as little as the local minimum wage over decade ago. In 2015, former Milwaukee Bucks dancer Lauren Herington sued her team over salary issues, the New York Times reported. She claimed, "the flat fees she received — $65 for games, $30 for practices and $50 for special appearances — translated to an average hourly wage of $5." Jake Suski, a spokesman for the team, denied those figures. "The lawsuit presents inaccurate information that creates a false picture of how we operate,” Suski wrote in an email to the New York Times. “The Bucks value the contributions our dancers make to the team. We treat all of our employees fairly, including our Bucks dancers, and pay them fairly and in compliance with federal and state law.”

In California, home of the Clippers, a law was passed in 2015 ensuring that cheerleaders and dancers are paid at least minimum wage. In August 2015, after the minimum wage bill had been approved by the governor in July 2015, Jezebel writer Tess Barker wrote a piece after going undercover at a L.A. Clippers Dance Squad audition in hopes of finding out how much these women are paid. While Barker was never able to get a straight answer from anyone about the financial details, she claims that she heard Audrea Harris, the team director, allegedly saying, "We do pay you. It’s not much. But we do pay you. ... You’ll have to have a second job. All these girls have second jobs. Or they’re in school. Or both."

Bustle reached out to the Clippers dance team for comment on their performers' pay as well as Harris' alleged comments, but has not yet received a reply.

The details about how much money the members of the team make were not be available until the final rounds of auditions, according to Barker's piece. Since LA Clippers Dance Squad will begin while the team is still auditioning, I wonder if the salary information will be a part of the show. I know the series is meant to show how hard these dancers work in order to prepare for their performances and how much they love being a part of the LA Clippers organization, so I'm not expecting it to focus much on the financials behind things, though that would be a refreshing addition to celebrating their hard work in an often underrated position.

But, additionally, it could be interesting to see what these women do while trying to follow their passions even when it might not pay an exorbitant amount. It's a relatable struggle, particularly for artists and performers. Hopefully the show will help the women get the recognition they deserve while also dispelling any unfair criticisms of these squads that take the court at halftime and work so hard.